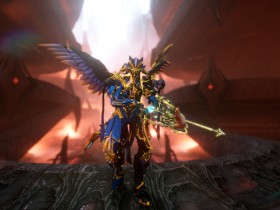 She can cloak, she can do stealth kills with her arrows and she can put enemies to sleep. Of course she has a few more tricks available but I personally do not really care about that.

I use Ivara almost exclusively for two tasks. Animal captures on the open worlds and grinding the daily standing for Cephelon Simaris.

Animal captures work pretty well because the animals won't see you when being cloaked and the sleep arrow can capture even larger groups of animals with just one shot.

Being cloaked also is very beneficial when trying to get your daily standing for Cephelon Simaris since you can load into an exterminate mission and scan the enemies before you stealth kill them. One mission is enough to reach the daily limit.

Note: The amount of standing you get per scan depends on the level of the enemy. Loading into a Steel Path Exterminate mission will therefore reduce the amount of scans you have to do significantly.

Of course you can also use Ivara to do Spy missions and bypass security cameras and lasers (if you use one of her Augments). Personally I don't care about that since I can do these missions with any other frame too but of course Ivara would be a good option for players which have problems getting spy missions done.

Another use of Ivara might be for unlocking specific Riven mods which require you to kill enemies undetected.

Ivara of course can be taken into Steel Path missions in order to do the killing job while being cloaked. That works, it just takes a bit longer than with other Warframes.

Ivara has a 20m radar showing enemies on the minimap.

Assume control of any projectile launched by Ivara and guide it to the target.

Summon a mighty bow and unleash a volley of devastating arrows.

Cycle through and shoot one of four tactical arrows. Cloak creates a stationary bubble that cloaks Ivara and allies. Dashwire creates a traversable zipline. Noise emits a high-pitched sound that attracts enemies to it. Sleep temporarily puts nearby enemies into a deep slumber.

Become invisible and steal loot from unsuspecting enemies or take out prey with deadly headshots.

Since I use Ivara primarily for stealth tasks, the Abilities I need most are Prowl and Quiver. Ability 4 - the Artemis Bow - most definitely is a very good way to deal damage, I just don't use Ivara for that purpose.

Prowl will remain active and keeps you cloaked as long you have enough energy and as long you won't move too fast. Bulletjumps will uncloak you so... don't do that. Prowl also slows down the movement speed. The fasted way of movement while cloaked is rolling. Prowl also adds 40% bonus damage on headshots and allows you to loot enemies which get close to you.

Ability Duration increases stealth time, Ability Range has influence on how far away you can be to loot enemies.

Prowl consumes 1 energy per second when standing, 3 when walking, 2 for every hit on enemies, 10 when taking damage. With other words, when trying to fight you are going to drain energy very fast.

The Energy Siphon Aura only works when Prowl is not active.

Quiver allows you to select which arrows you want to fire by tapping the Ability key. When hold the key the arrow is being shot. You have to be a bit careful when selecting the arrow of choice.

This build is good when you want to loot enemies as you very frequently get get additional energy orbs this way. It also is a very good option to use when you want to do Spy missions due to the "Infiltrate" Augment which allows you to pass laser barriers without enabling the alarms. This build however has a major weakness. As soon you start killing enemies you drain energy very fast.

Using Arcane Energy is mandatory on this build. 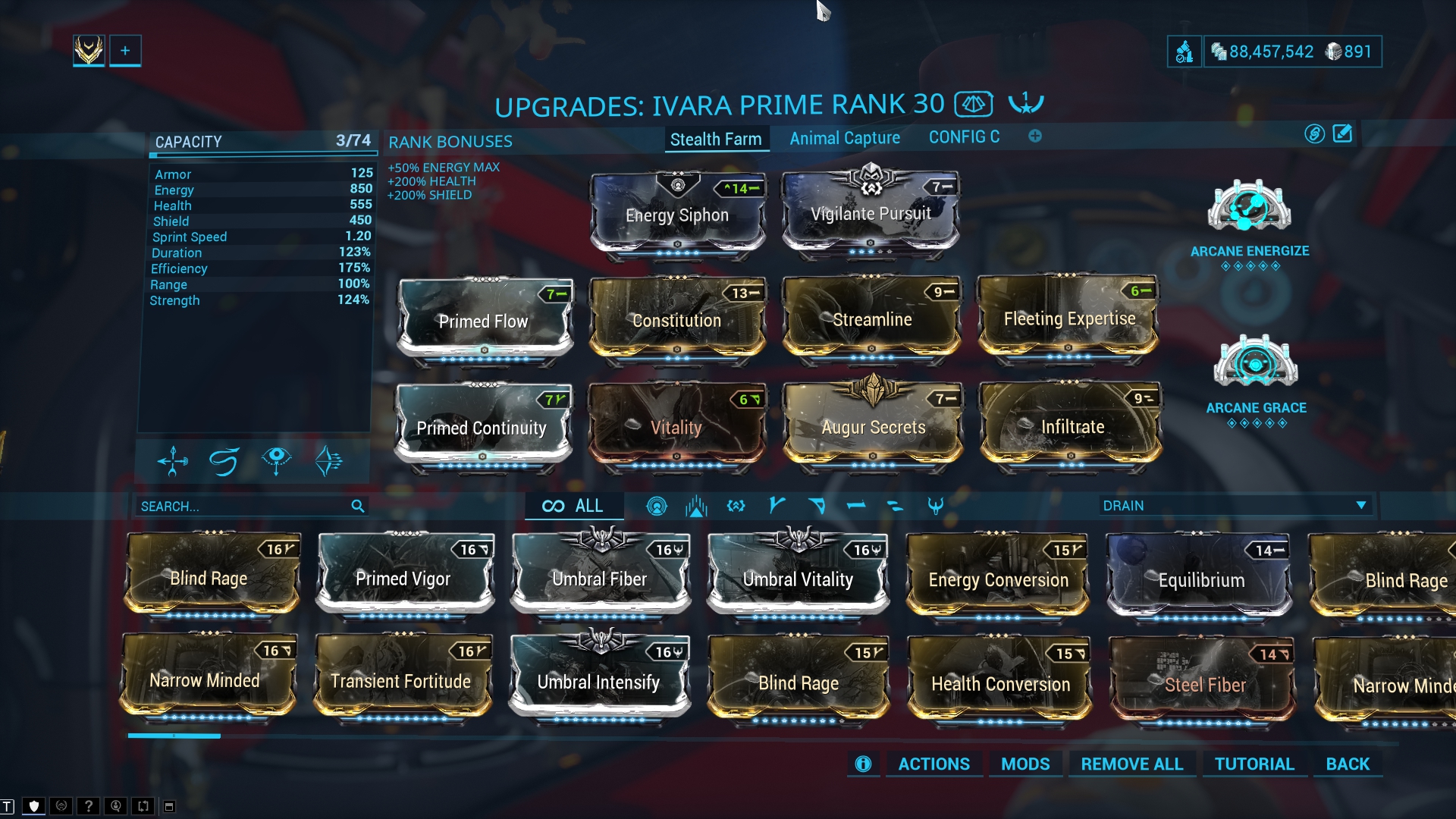 This build actually has some benefits compared to the one above.

It is a bit weaker when you want to use the Artemis Bow due to the lower Ability Strength and it does not have the Infiltrator Augment which you would need for the Spy missions but this build is much more comfortable to use.

The "Enemy Radar" Aura helps to detect capture animals much better. The "Preparation" Exilus mod lets you start into the mission with a maxed out energy pool of 850. That is all the energy you will need for the entire mission. It does not matter that the Ability Efficiency is lower if you already start with that much energy into a mission.

This is clearly my preferred Build when using Ivara. 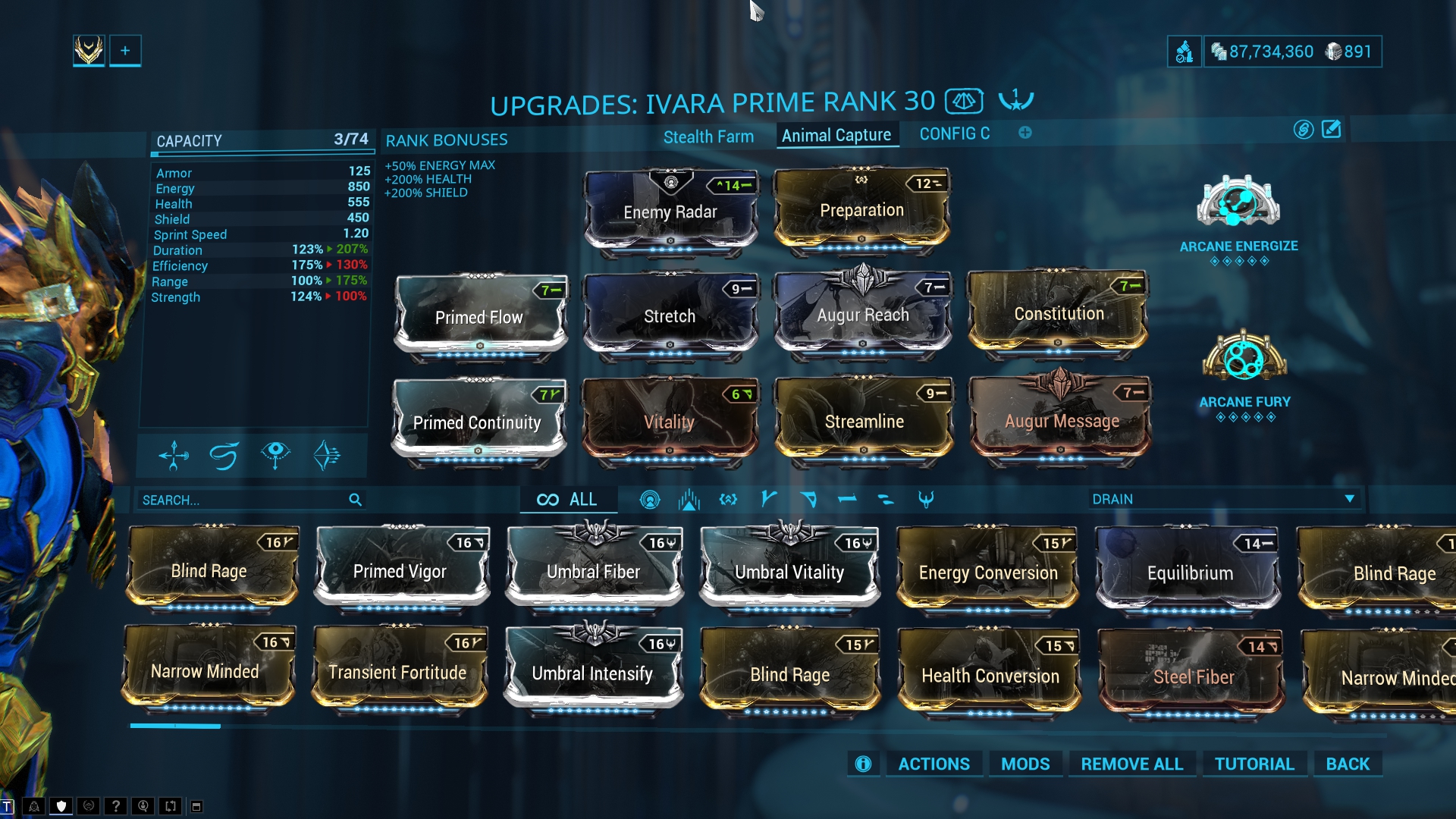 The choice of elemental mods can be changed to whatever you prefer. You can make it fit the enemy type you are trying to fight, or you can go for the current meta builds (heat+viral or corrosive) if you want. In this case it would just mean to switch the position of Rime Rounds and Thermite Rounds to get Viral+Heat.

There are many different build variations possible for the bow. Even the use of Hunter Munitions can be an option due to the high crit chance. This would apply a bleed status effect with 30% chance to proc. As you can see in the test video below Hunter Munitions indeed is a very potent option to use. It just requires putting more Forma into this weapon.

To be honest. I did not put that much work into this bow build since are barely even use it. 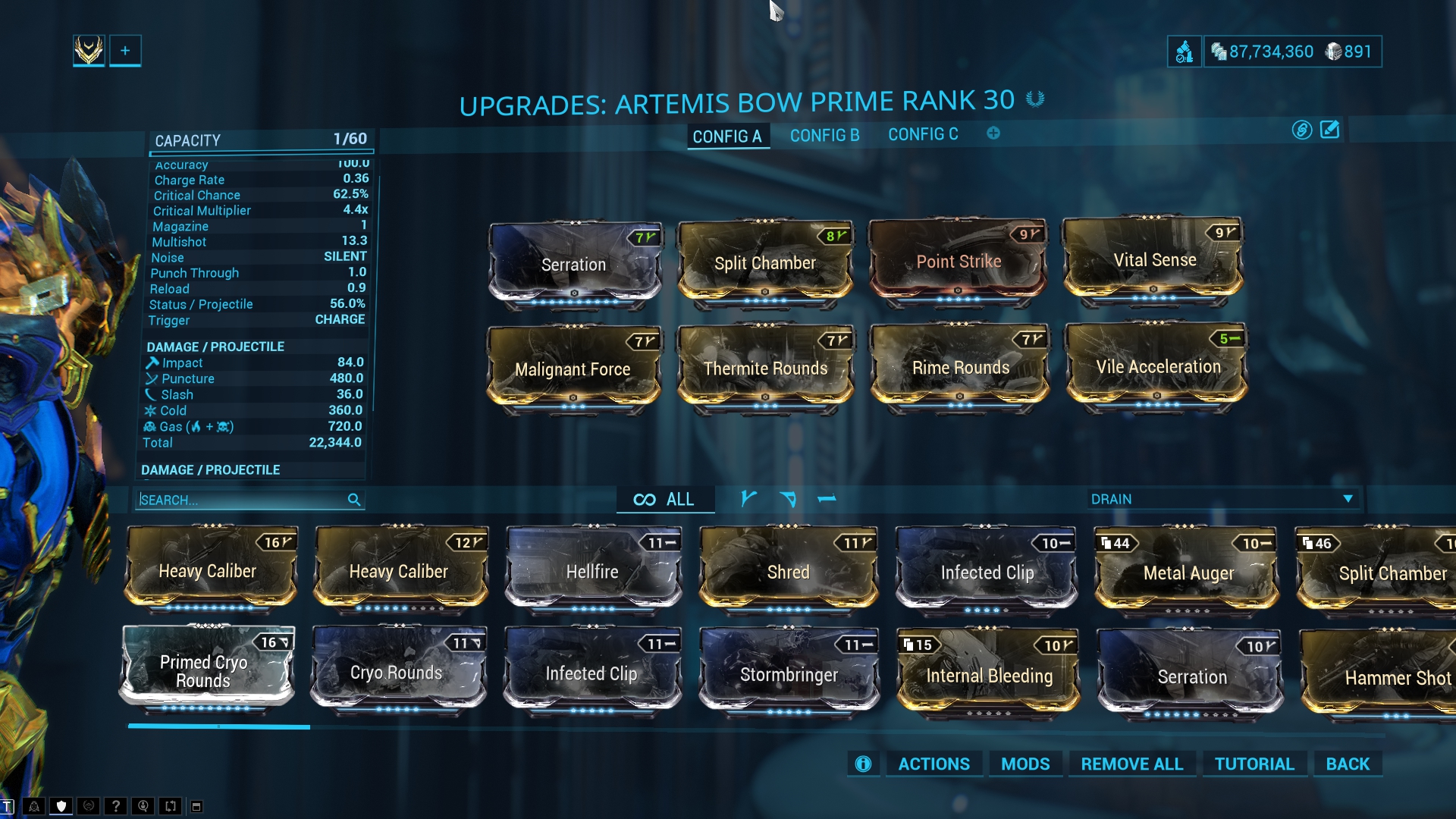