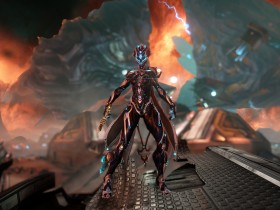 Nova is a Warframe that can be considered an oddball due to various reasons.

Multiple aspects of this frame are outright strange and therefore actually very interesting.

Nova looks squishy and weak at first, not a superior damage dealer or tank unlike other frames but it can actually do both roles if done right. However, I think it is best to consider her a support frame.

Worth to mention is that with a speed of 1.2 she also is one of the fastest Warframes in the game.

There are multiple ways to mod this Warframe but in the end it comes down to two builds. A speed Nova or a slow Nova, both with their specific benefits in certain game modes.

e.g. a speed Nova increases the movement speed of enemies and therefore is best to be used on game modes with a limited number of enemies that you want to kill as fast as possible -> defense missions; But keep in mind that a Speed Nova might decrease your survivability (as you can see in the video below).

A slow Nova slows down the movement speed of enemies and is good on missions where you have to defend a target while a timer is running -> interception or mobile defense. A slow Nova also is much more efficient at killing enemies due to its higher Damage values.

This one casts a slow moving ball of antimatter which will detonate on collision and cause damage.

It is possible to change the direction of the ball.

Generally I consider this ability a nice gimmick but not useful enough to waste energy for it.

You certainly have seen this ability in action already since it is impossible to overlook when a Nova is in your team.

It creates a rectangular wormhole which allows players to travel instantly long distances. This ability definitely has its use when doing speed runs on certain missions like capture, sabotage or rescue.

That of course if you don't constantly crash into something.

Now we are getting in to the realms of ability which truly make a difference on this frame.

These orbs remain on your Nova indefinitely (with other words they don't decay with time). However, the 2nd trait of these orbs is that they will seek nearby targets and cause slash damage to them. This will deplete the orbs relatively fast.

This will also mean that the damage reduction decreases again. So there is a trade-off, damage reduction vs dealing damage. One disadvantage is that you can not cast Nullstar again unless it is completely depleted.

I think the max damage an orb deals is ~250, which is not much so it would be a good idea to focus on damage reduction (this is much more useful).

Lets see how you can influence these abilities.

Ability strength has an influence on the amount of damage dealt by the orbs.

Duration increases the number of orbs that are being cast.

Range increases the range these orbs travel to attack enemies.

Best combination would be to have a high duration to cast as many orbs as possible and a low range to avoid that these orbs attack enemies. Efficiency and strength at this point can be ignored.

Keep enemies on distance and you all incoming damage is reduced by 90%.

As long this ability is active you are immune to knockdown.

Now this ability is next to Novas 1 the main reason to use a Nova.

Molecular Prime creates a wave of volatile antimatter which primes all enemies in range of that wave. This doubles the amount of damage enemies receive from all sources. With other words it is a 2x damage multiplicator on top of whatever your weapons deal.

All primed targets also cause an explosion with a 12m radius when being killed. This can cause a chain reaction killing all nearby enemies.

But I mentioned above that Nova is a bit strange.

This starts with the wave itself.

You would want to increase the range of this wave to prime as many targets as possible. Naturally you would try to use range mods, right? Not only that this would conflict with Ability 1 where you want to keep the range as low as possible, it also does not work.

The range of Molecular Prime is not based on ability range at all, but on ability duration instead. It even makes sense. It's a wave and it travels by time. The more duration you have the longer the wave can travel. This also fits perfectly with the high duration you need for ability 1.

Ability duration as high as possible, ability range does not matter for this ability (but should be low in combination with ability 1), efficiency is nice to have but not a requirement and ability strength is the factor that makes the two builds I have mentioned above different.

Increasing the ability strength slows down enemies inside the wave.

Decreasing the ability strength (by having mods with negative strength values) increases the speed of these enemies.

Nova is really fun to play because at least 3 of the 4 abilities fit very well together and the different builds have opposite effects.

The logic behind the builds is very different from the ordinary stuff you know from other Warframes.

Below you can find both of my build for Nova Prime. Keep in mind that the stuff that works for Prime frames also works for the non-Prime version (just a little bit less efficiently).

If you don't have the Umbra mods or Primed mods just use normal variants. They also work... with a bit lower values of course.

Lastly, yes Nova is hungry for Forma, at least when you use Umbra and Primed mods, but these make Nova though enough to deal with hard mode missions such as steel path or high-lvl arbitrations. But I would advice to use the slow build on higher difficulties since the Speed build makes surviving significantly harder. The Speed build is more meant to be used on lower difficult levels to speed up the mission progress. The explosion Damage of Speed Nova is 320 while the explosion Damage on the Slow Nova is 1240. 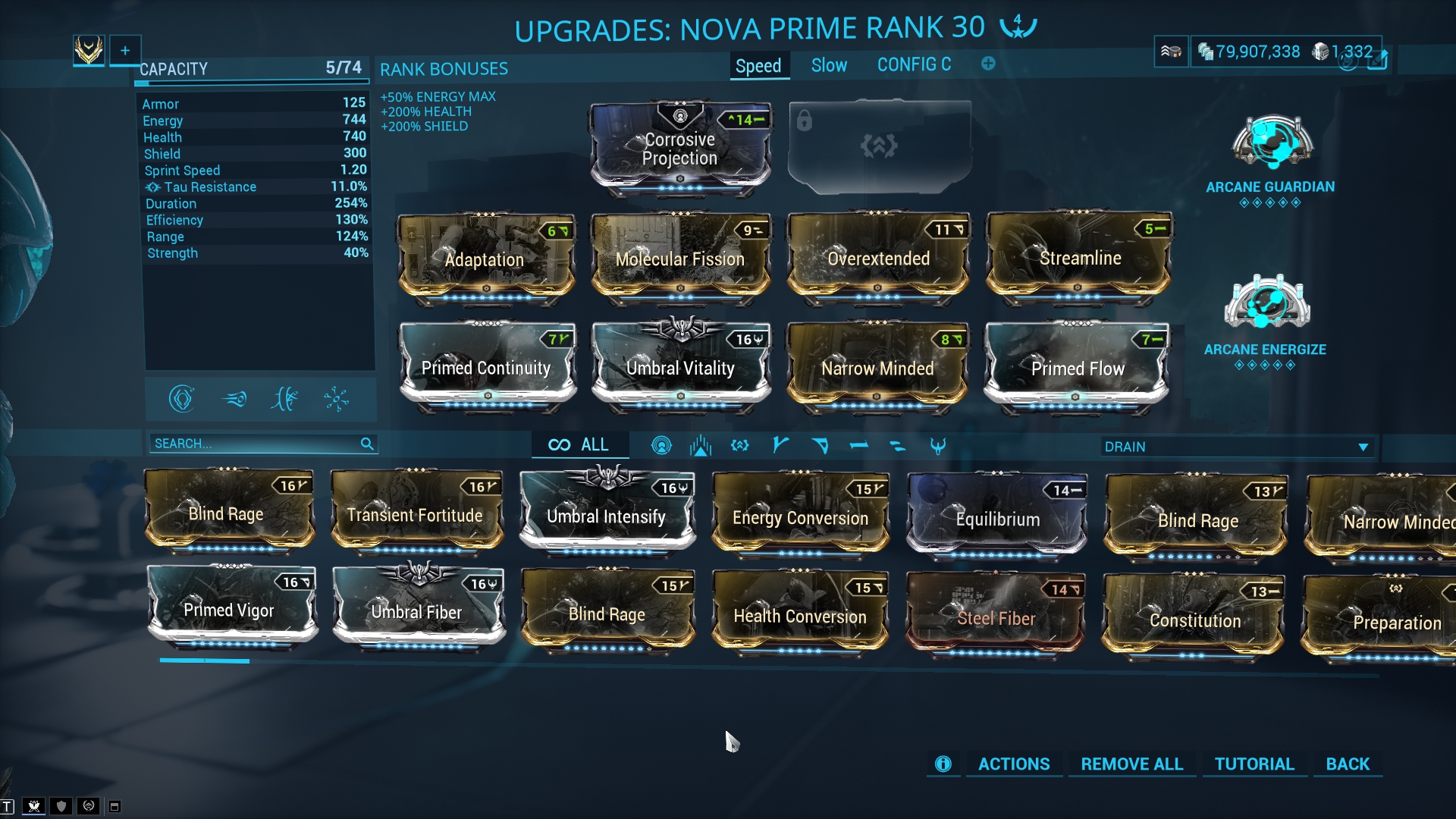 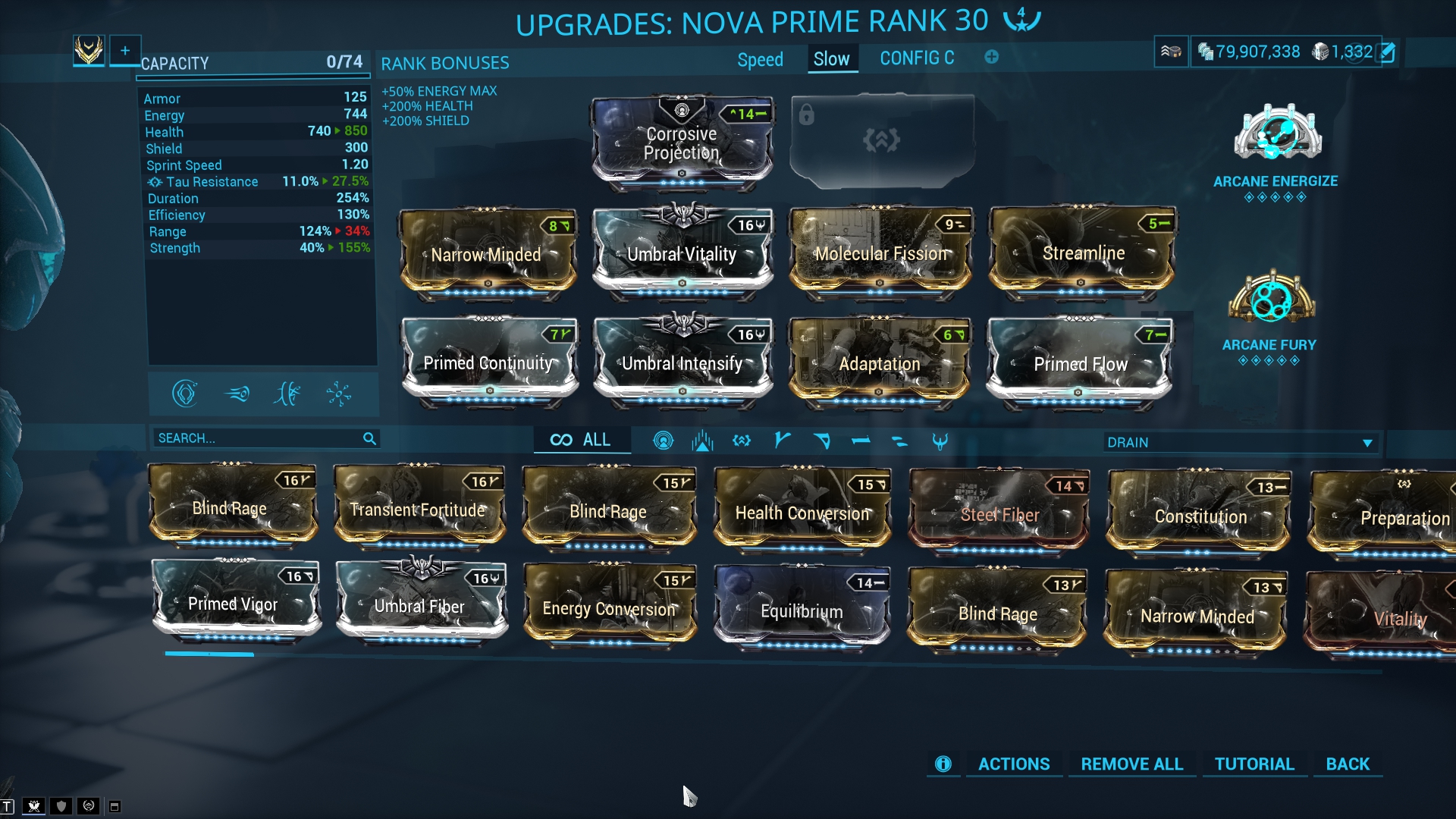 Note: I don't use Exilus mods on these builds since they offer no real benefit on Nova. It is better to use Exilus Adapters on other Warframes instead.