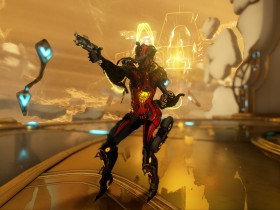 All her abilities are based on music, which allows a very high degree of customization. That also means that she is not so easy to setup and handle.

She also might turn out to be a bit expensive if you go too deep into detail since instrument variations costs extra and only can be bought with platinum.

Octavia draws all her power from the music created by her Mandachord, a music instrument you can freely config (if you are patient enough and willing to spend platinum on the already mentioned instrument variations).

Alternatively you can go for the default song setting... which is fine.

Custom songs can be created, stored and loaded from a playlist. Stored songs also can be played on your Orbiter radio.

If used correctly Octavia can be one of the most powerful Warframes even on very high difficulties since you can cloak and deal damage which scales indefinitely with enemy level.

She is very good in Solo missions but might suck completely if you play together with players that deal a lot of damage to the enemies.

Her passive is called Inspire and grants a buff to herself and her allies in 15m range which over a duration of 30 seconds replenishes 1 energy per second after casting an ability.

This duration refreshes with ever ability casted.

That is one of the most useful passives in the game.

Draws power from the decibel level of sound in the area and uses it to amplify a damage buff for Octavia and her allies. It also doubles the damage and range of nearby Mallets.

Launches a rollerball that charms foes to follow it. Combines with the Mallet to create a roving ball of sonic destruction.

Rhythmically beats damage into nearby enemies and draws their fire. Damage inflicted on the Mallet increases its lethality

Ability 1 (Mallet) is the most useful as you always want to deal damage to enemies. If you combine it with a Resonator this Resonator ball will carry the Mallet directly to the enemies, which increases your reach. Enemies also react more aggressively on the Resonator ball than they would do on the Mallet alone. This is especially useful since the Mallet only causes damage to enemies if being attacked by enemies. The more enemies cause damage to the Mallet the more damage is reflected back to the enemies. This in theory scales indefinitely based on how much damage the Mallet receives and is only limited by the duration of the ability. With increasing enemy difficulty more damage is done to the Mallet and therefore reflected back to the enemies, which makes Octavia scale the damage output directly based on the enemy level you are fighting. It does not matter if you face level 50 enemies or level 5000 enemies.

You can also combine the Mallet with the Amp (Ability 4) which doubles the damage done by the Mallet and its range. This combination is best to be used when you try to defend an area but don't want the Mallet to follow you to a different location.

You can also use Ability 1 + 2 + 4 but you might notice that Mallet and Resonator will leave the area of the Amp. In that case you are wasting energy (which probably is not a big deal since Octavia has much energy as disposal).

Above I mentioned that Octavia might suck when playing together with other damage dealing players. This is because the Mallet only deals damage if it receives damage. If other players kill enemies faster, stun them or have a higher threat level than your Mallet, the incoming damage on your Mallet will be too low to actually reflect much damage back.

Octavia is a great Solo Warframe but does not work well on high-dps teams. It still works good on teams which only do low or medium damage.

She also gets better with increasing difficulty range (if you can keep her cloak up and running non-stop).

Ability 3 allows you to choose from 4 different buffs.

To be honest I only use the cloaking buff by presssing the crouch key rhythmically to the Mandachords Melody.

Octavia is a very squishy Warframe and you actually want to have the cloaking active non-stop on higher difficulty missions.

The activation of the buffs is complicated enough for me to focus on just one of these buffs.

But be careful. Area of Effect damage still can cause damage to Octavia even when cloaked.

This build does focus on a high Ability range and long Duration. It is a good choice for point defense missions. 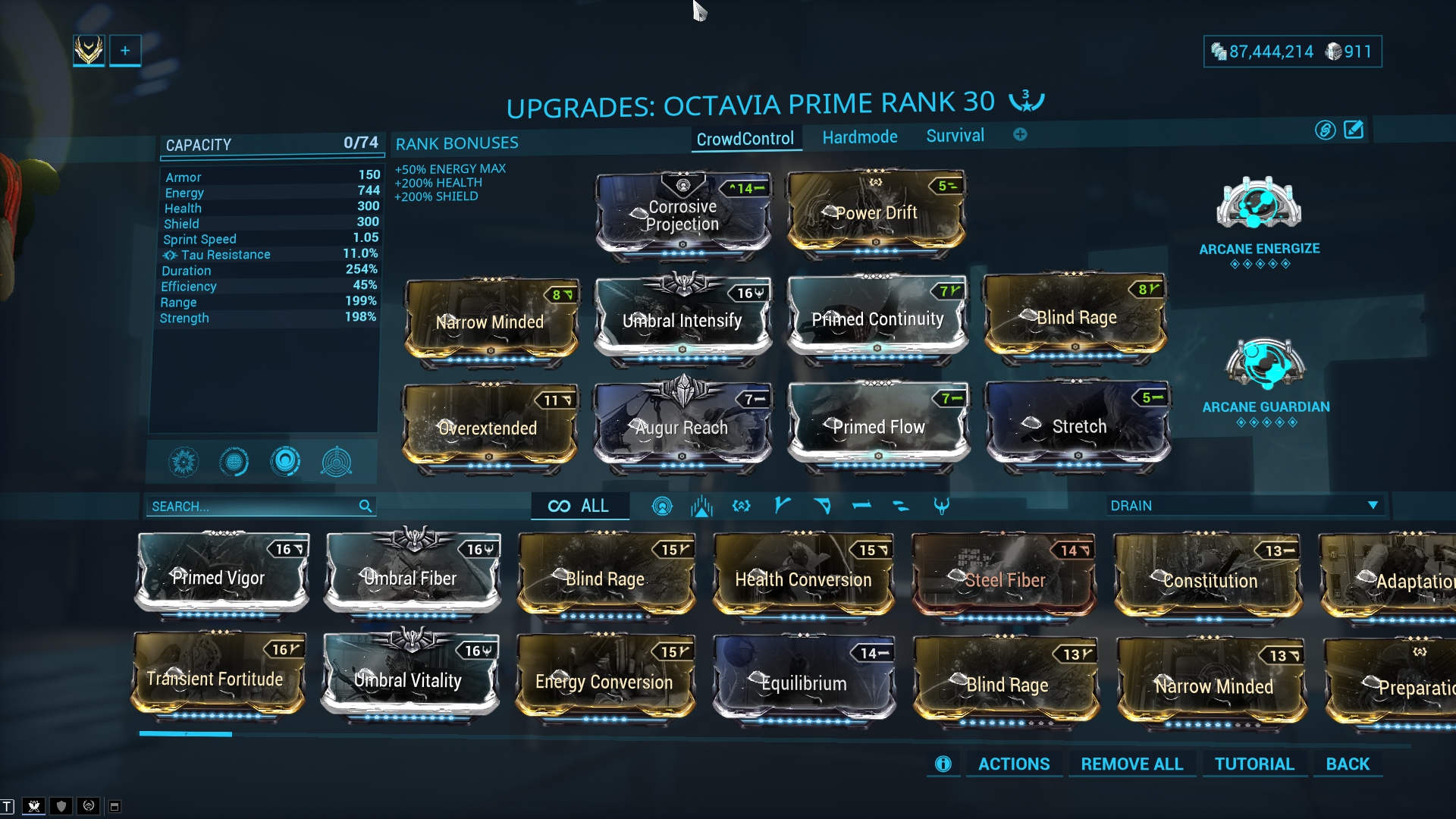 The Hardmode build focuses on dealing as much damage as possible on a short range. The perfect build for Steel Path or Arbitration. Since enemies will die slower on these difficulties, less energy orbs will drop and therefore the Ability Efficiency is higher to compensate this. 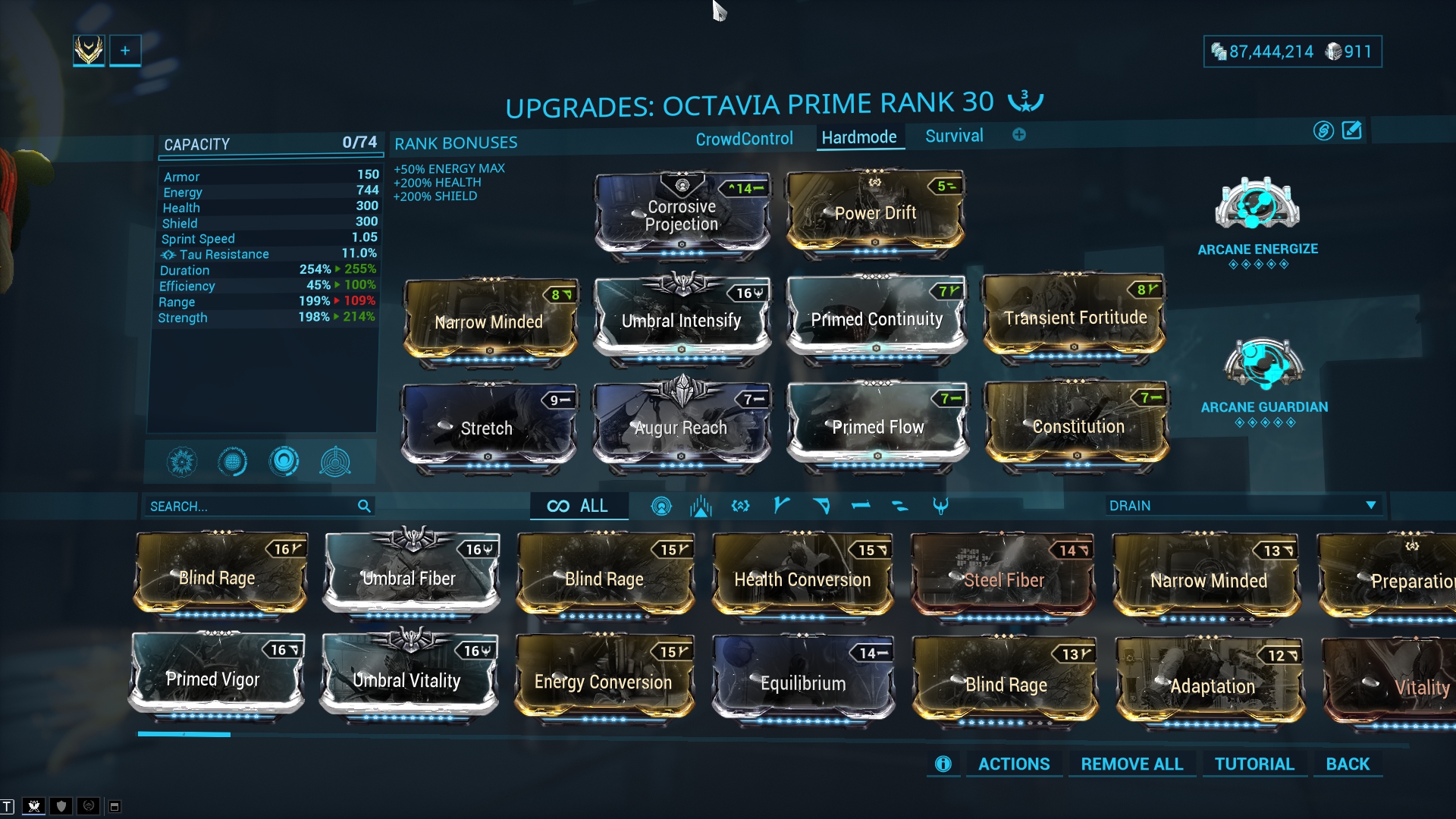 This one is not as powerful as the other two builds but the Adaption mod at least gives Octavia a chance to resist some of the incoming AoE damage or ricochet hits. 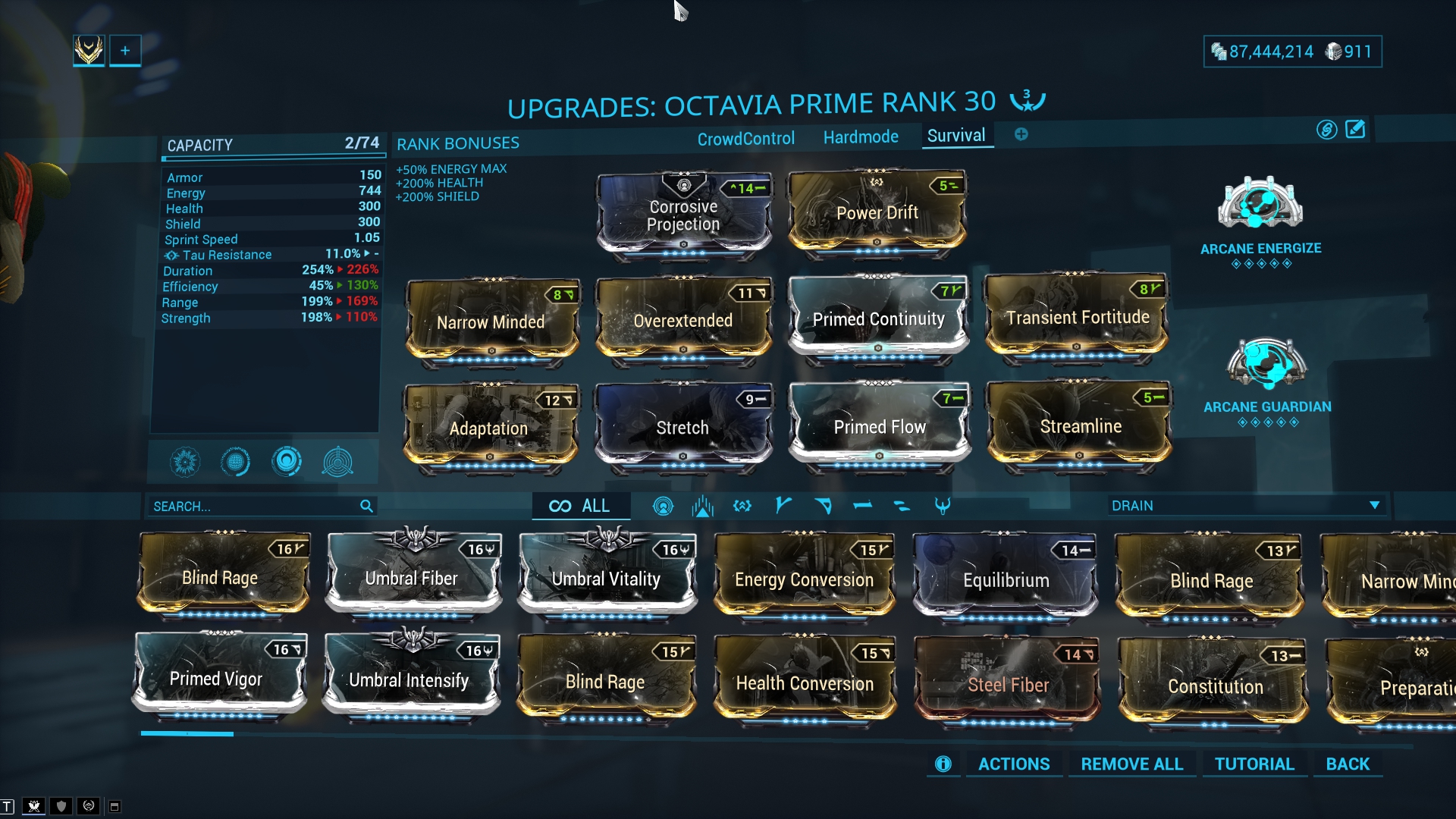