I have to admit that I have my beef with Khora.

She is an incredibly strong loot Warframe that can help you farm large quantities of resources. She is very effective at defending certain regions if the mission requires it.

Her Whip can create red critical hits which instantly kills enemies. She even allowed me to solo the Steel Path interception missions with ease.

However, I personally fail to get her to work in high-level Survival missions like in Steel Path or Arbitrations.

Her survivability is not so great and I often run into energy issues if I don't use an energy restoration buff from the gear wheel.

Of course would it be possible to use the Zenurik Focus school to gain more energy but due to I somehow have the wish to use Namaron instead for the reduction of the combat counter drain. Maybe this is my mistake.

I also think that it is a shame that her Whipclaw Ability requires an additional stat-stick in order to produce high damage. This is not really a intuitive mechanic.

Khora has a Venari Kavat fighting for her. This Kavat can be modified seperately. It respawns after 45 seconds when it dies or can be instantly revived using Khoras 3rd ability.

Bind a helpless target in living metal, entangling others who stray too close. Whipclaw will refresh the trap allowing it to capture more enemies.

Command Venari to focus on a target. Hold to cycle between Attack, Protect, and Heal postures. If Venari is killed, use this ability to revive her instantly.

Weave a dome of living chain that ensnares and strangles any enemy within, and any foolish enough to approach. Foes outside the trap will try to hasten their comrade's deaths by shooting them. Crack Whipclaw on the dome to further damage any trapped enemies.

The Pilfering Strangledome Augment allows you to get extra loot from enemies which die in your Strangledome (Ability 4). Using the Whipclaw (Ability 1) allows you to kill these enemies faster. The drop chance for additional loot is 65%. Arcane Fury increases Melee damage by up to 180% and Arcane Avenger can add +45% crit chance to your attacks. 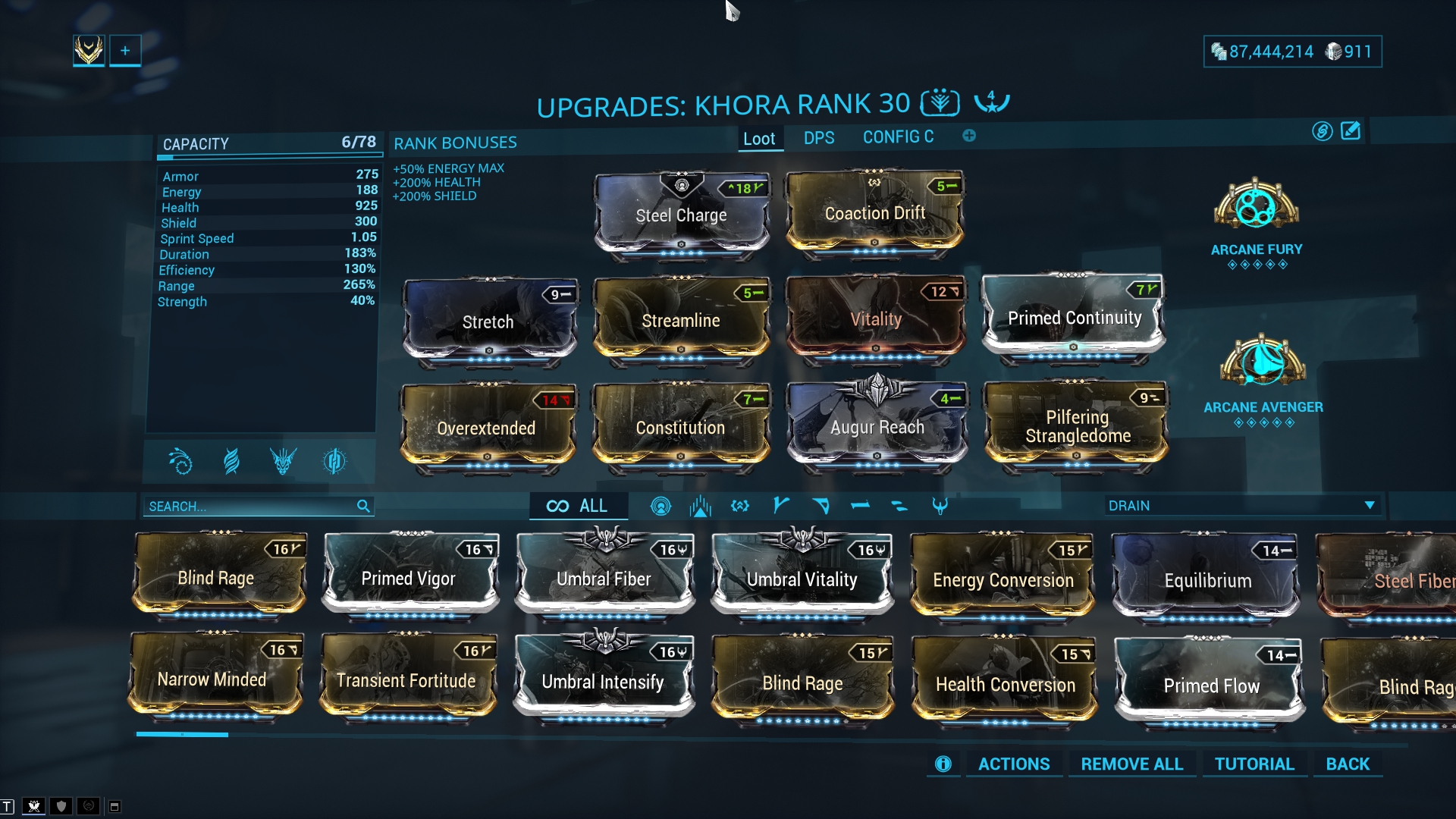 This build boosts the damage of the Whipclaw by having a much higher Ability Strength and also using the "Accumulating Whipclaw" Augment which adds a stacking damage bonus of 35% to your Whipclaw attacks. 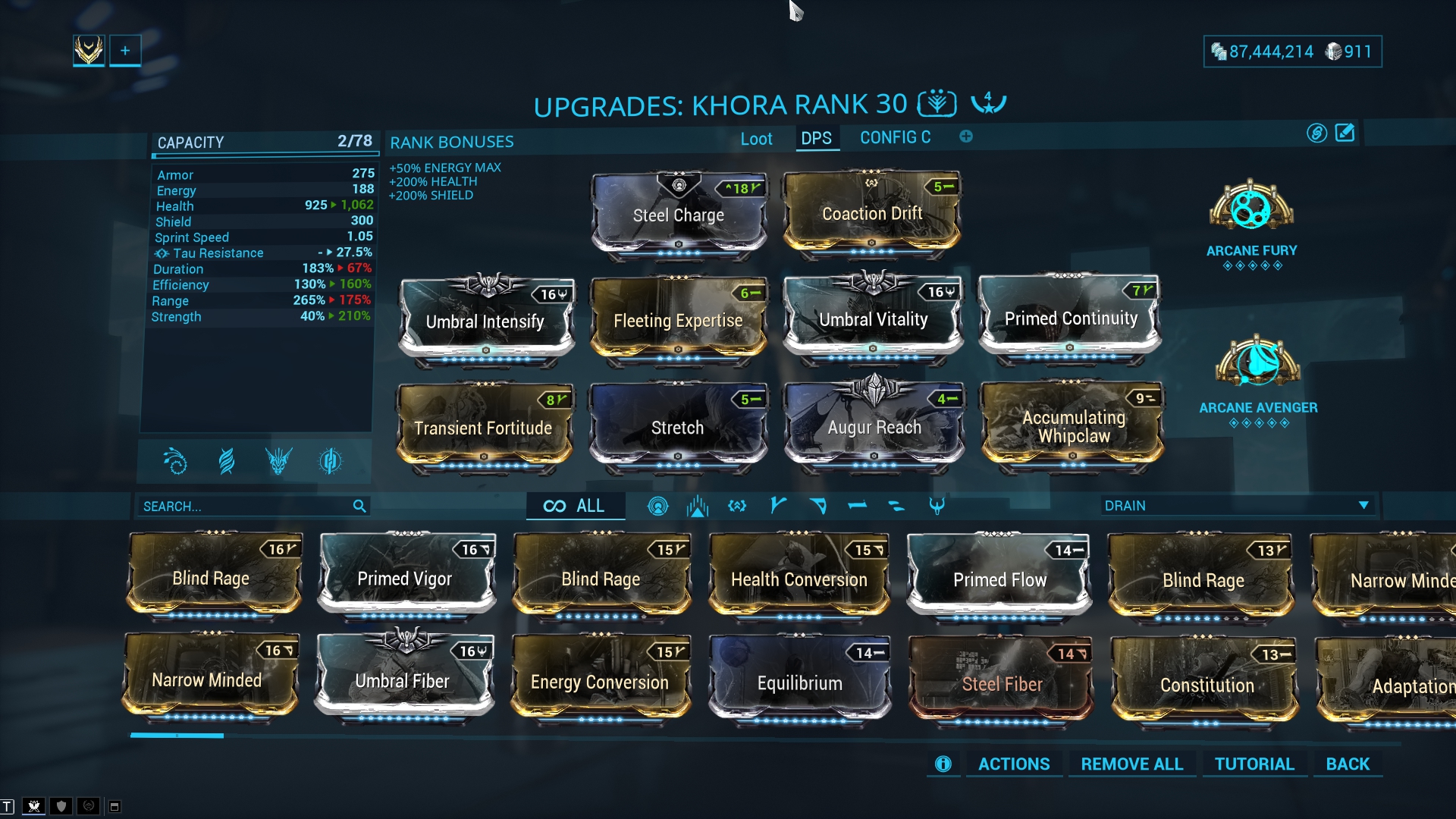 The Venka is my stat stick for Khora due to the x13 combo counter (other weapons only have x12). Putting this aside the weapon actually does not matter.

Only the mods used on that weapon matter for being a stat-stick.

The Whipclaw ability will use the mods of the equipped melee weapon to calculate the damage values. Whipclaw evenly deals slash, impact and puncture damage. I decided to add more slash to make it proc more often.

Boosting the base damage and also adding an armor stripping elemental damage is also very important. 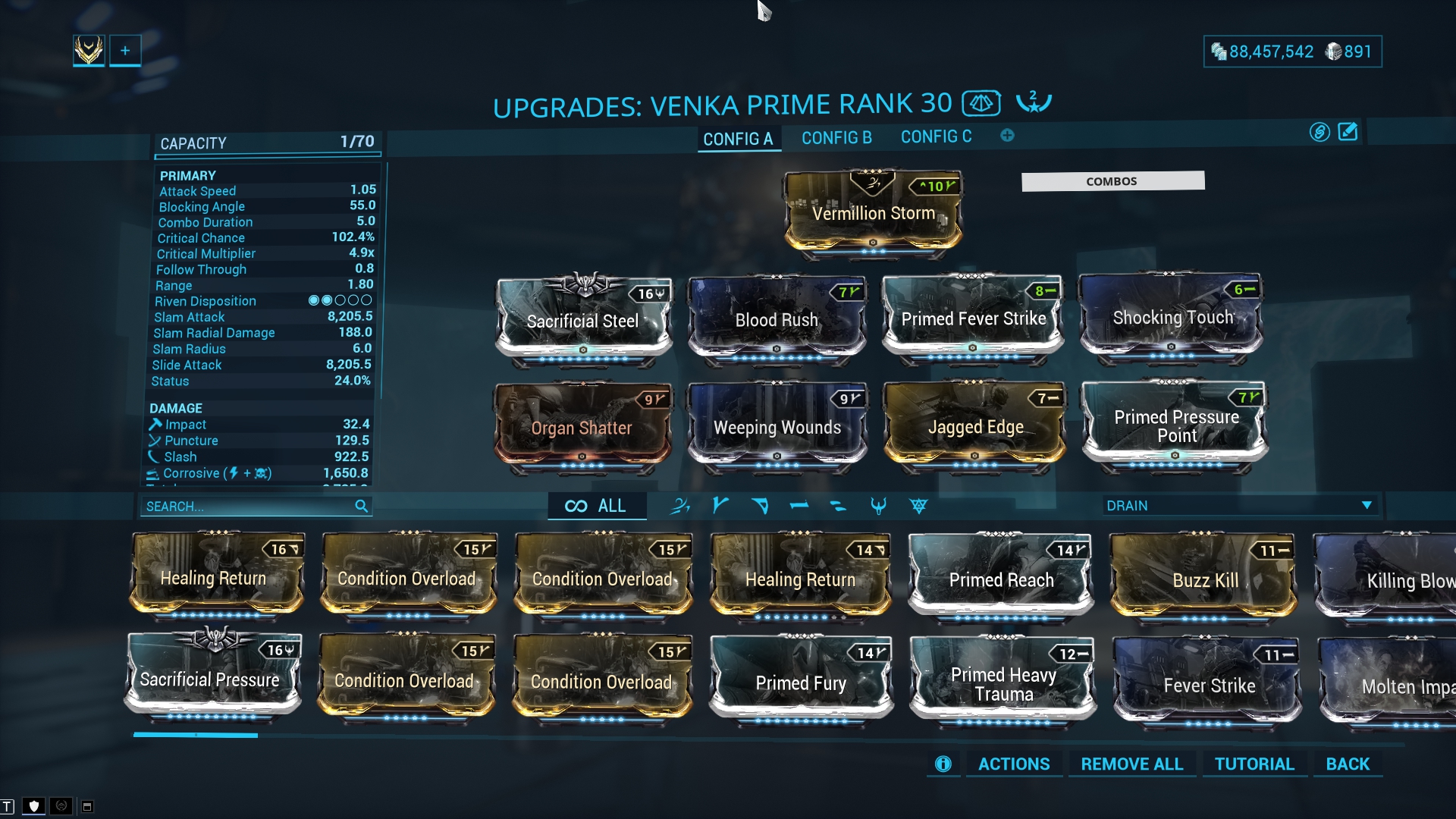