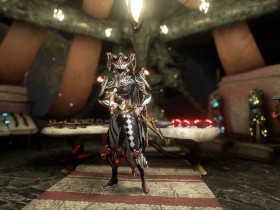 Mirage in my eyes is an absolutely awesome Warframe.

Her damage dealing abilities are outstanding and her damage reduction ability is also great.

But Mirage is not a Warframe for beginners.

It requires a high amount of environmental awareness to be able to use Mirage. What she does and also what she does not highly depends on knowing her abilities in detail and knowing where exactly you need to cast these abilities.

Light and Shadow have a big influence on Mirage. In light her damage potential increases while in shadows her defense becomes stronger. You have to be aware of these conditions and adjust your gameplay acordingly.

Just spamming abilities where ever and when ever you want does not work.

Fires an energy prism that shoots lasers in all directions. Activating again detonates the prism, blinding nearby foes.

Standing in light, Mirage deals heavy damage, while the shadows make Mirage difficult to track and even harder to hurt.

Booby trap nearby objects while conjuring an irresistible jewel that bursts with radial blind when touched in darkness, or a radial explosion in light. Conjure multiple smaller jewels with the help of Hall of Mirrors.

Mirage creates an entourage of doppelgangers to confuse and distract the enemy.

Prism creates a ball of light causing radiation damage to enemies which are hit by the emitted light beams. This damage is doubled if Mirage is standing in the light. Standing in light or dark areas has impact on Mirages abilities.

Prism can bounce off on surfaces. The Ability can be ended prematurely by passing 4 again.

The damage bonus is multiplicative based on the total weapon damage after modding. The amount of environmental lighting also has impact on the weapon damage bonus. Standing in light slightly changes Mirages appearance.

Eclipse has no influence on the damage done by Companions and the "Hall of Mirrors" Ability.

Sleight of Hand creates small orbs/jewels which attract enemies and booby trap nearby objects such as all Pickups, turrets, security cameras, lockers, resource caches, storage containers and many more interactive objects on the map. These jewels like the abilities above are light sensitive. If placed in light they blast deal damage. If placed in darkness they just blind the enemies.

If combined with the "Hall of Mirrors" ability the mirrors will create smaller jewels with lesser effects 6 meters away from the primary jewel. This does help to cover larger areas.

The traps have different effects based on what they are placed on. e.g. Lockers deal true damage equivalent to the enemy's remaining amount of hit points. Pickups on the other hand deal elemental damage based on the type of the pickup(ammo=Cold, health orbs=heat, energy orbs=electricity, affinity orbs=toxin).

Since dying enemies leave even more pickups it is possible to re-cast the ability to lay even more traps.

Hall of Mirrors creates 4 holographic images of Mirage which draw enemy attention and each image will deal 20% extra weapon damage. This is a flat 20% on top of the total weapon damage after modding.

The video above starts to show what the Abilities "Sleight of Hands" and "Hall of Mirrors" can do in Elite Sanctuary Onslaught (even actually in every mission with plenty of enemies).

At the end of the video I show a comparison of normal weapon damage vs level 180 Corrupted Heavy Gunners and how much more damage is being dealt if "Hall of Mirrors" and "Eclipse" are used.

Mirage is a killer.

As the name suggests this build focuses on survivability and increasing the damage of the doppelgangers. This would be a build you would use if you face very hard enemies. You can do extreme amounts of damage using Ability 1 and 3. Your weapon damage is getting amplified by an insane amount. The "Hall of Melevolence" Augment is making the doppelgangers even more powerful. 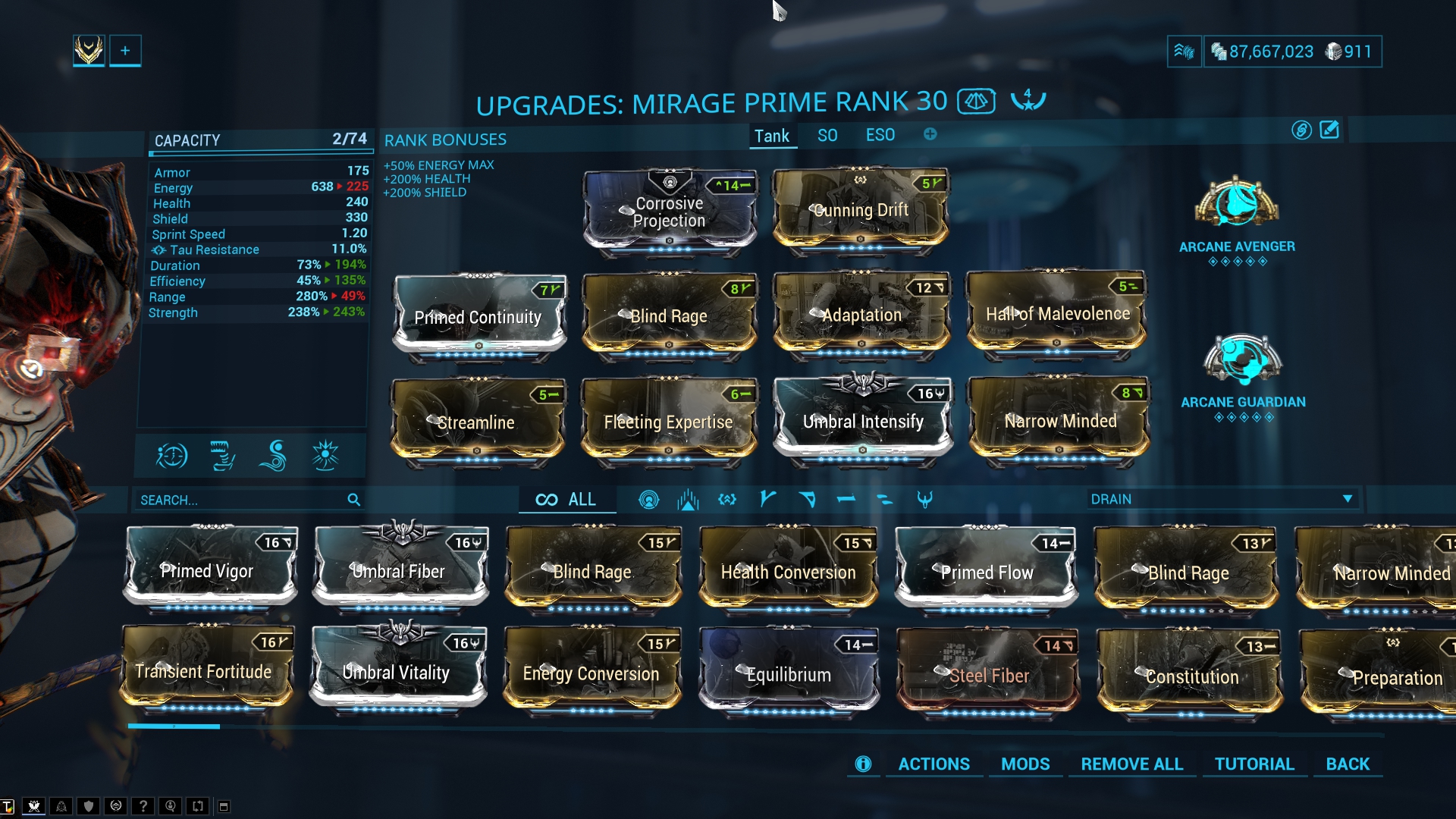 The perfect build for ESO runs. Due to the high energy pool available you don't need much Ability Efficiency and Duration. Strength and Damage is what you need to cover a very large area of the map. When enemies die they drop pickups which then again can be turned into traps. The "Explosive Legerdemain" Augment further increases the amount of damage you do this way. This build also works for all other missions where waves of enemies are spawning or endless missions. It scales well till ~level 100. Above that you probably should go for the tank build. 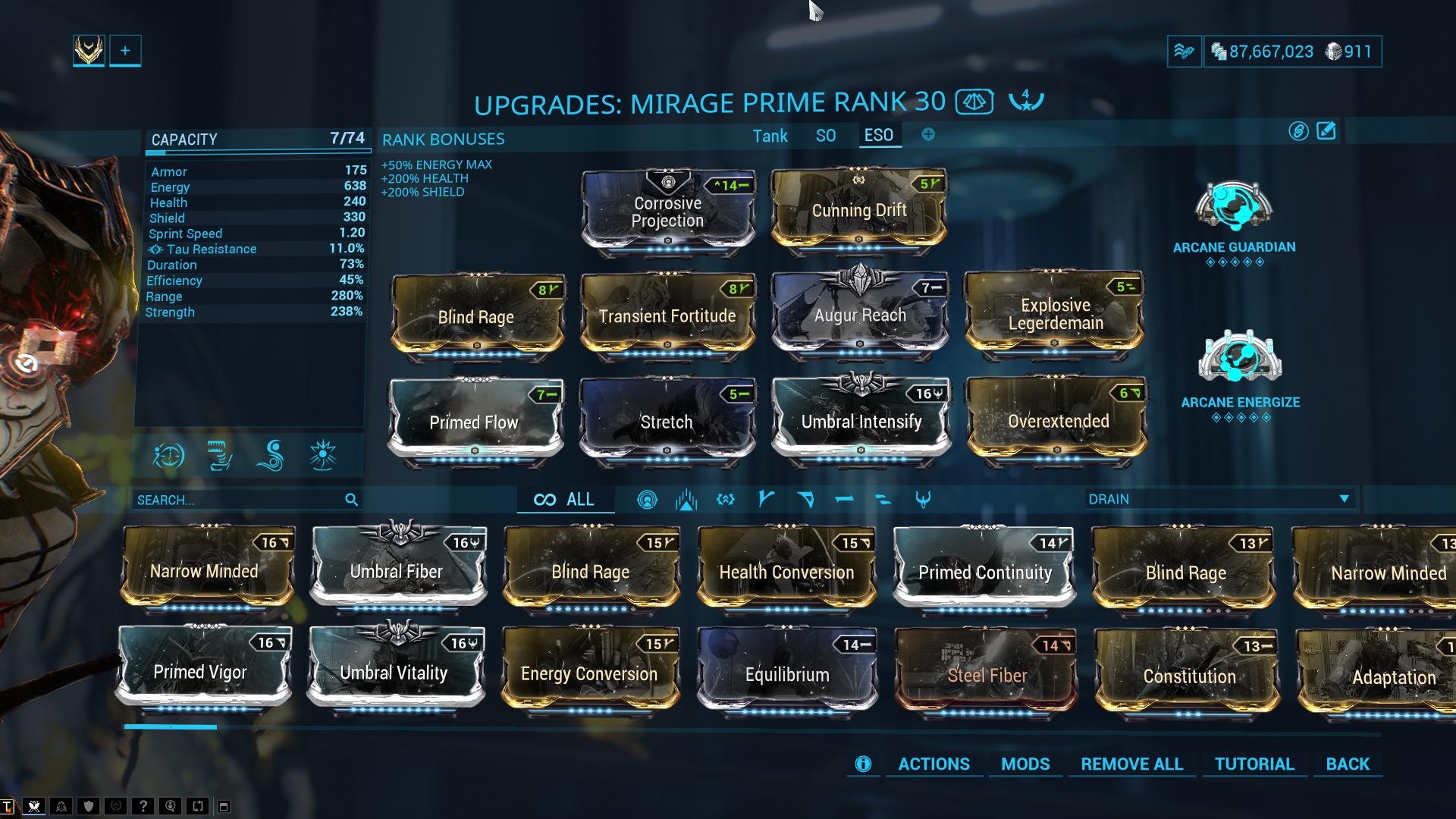 This build is similar to the ESO build but more meant to be for enemies with lower levels. Duration is lower since enemies die faster, Efficiency is higher because you need to cast the ability more often since more enemies will spawn and die. 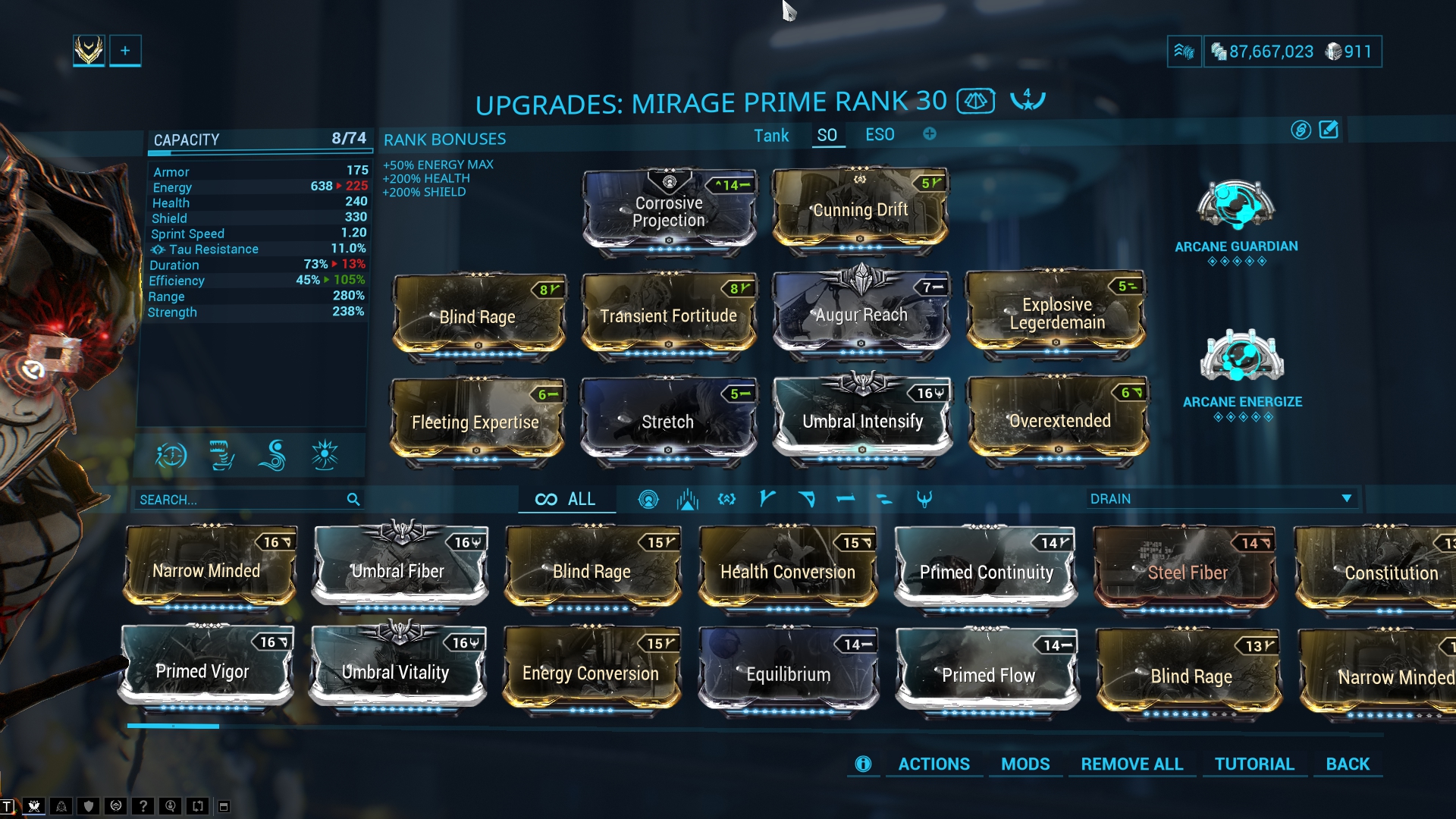