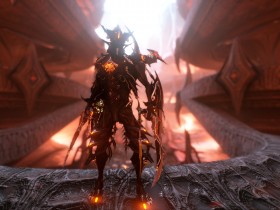 Nekros is my primary loot Warframe as he offers am awesome damage resistance combined with his looting ability which forces dead enemies to drop loot a second time. Unlike other loot Warframes Nekros is more mobile because his loot ability is not being cast onto a specific location, it instead covers a range around Nekros.

His survivability is not based on his health, shields or armor (he really is very weak in this regard), but his abilities (if used right) make him almost immortal.

The video below shows how easy Nekros is being killed when no abilities are in use and how hard he is to kill once his abilities are active.

In my eyes Nekros is a great choice for Steel Path or other missions where you want to get specific resources that drop from enemies.

Nekros regenerates 5 points of health if an enemy dies within a range of 10m. This can also heal companions.

A blow so powerful, it turns the enemy's very soul into a deadly projectile, damaging all in its path. Enemies that survive the blow are Marked for Harvest and become one of Nekros' Shadows of the Dead if killed while marked.

Casts fear into the hearts of nearby enemies, causing them to run away in terror.

Ability 4 - Shadows Of The Dead

Summons shadow versions of vanquished enemies to fight alongside you for a short period of time.

Forces fallen enemies around you to drop additional loot.

While Ability 4 (Shadows of the dead) clearly is the ability that keeps Nekros alive I would claim that Ability 3 (Desecrate) is the one you want to have active non-stop.

Desecrate will allow Nekros to loot a dead enemy a second time. This increases the chance up to 54% to get additional resources, mods but also health orbs and energy orbs, which both increase the survivability of this Warframe.

Shadow of the dead requires you to kill a few enemies first before it can be activated. It summons fallen enemies to fight for you which is certainly nice. Combined with the "Shield of Shadows" Augment each Shadow in 50m range of Nekros take 6% of the damage Nekros would receive in his stead. This can lead to a 90% damage reduction if the Ability Strength is above 214%.

The shadows have their own stats based on the enemy they once were +100% health, +100% shield, +150% damage. They of course when being damaged lose health, with the "Shield of Shadows" Augment they also receive the damage done to Nekros itself and they lose by default 3% health per second.

This means that the damage reduction gets weaker and will eventually run out completely at some point. If that happens on higher difficulty missions Nekros won't survive long since the Warframe itself is a bit squishy. It is highly adviced always to keep an eye on the ability, check how many shadows are still active and if required recast this ability before it runs out. The activation animation for this ability is very long and you are unprotected until the animation is over if you cast the ability too late. Maybe the only way out of such a situation would be to use Ability 2 (Terrify) first and then recast Ability 4.

While linked to the shadows Nekros is immune to knockdown.

Actually only this one build since you won't need anything else.

The Arcanes are a matter of choice. Arcane Fury since I almost exclusively use melee weapons with Nekros and the damage boost from this arcane is great. Arcane Grace for some extra healing.

The Aura "Rejuvenation" is for some extra healing (also for the team).

The "Despoil" Augment allows Nekros to consume health instead of energy everytime a dead body is desecrated. With other words won't use energy but will bleed out instead. That however is no problem since dead bodies very often drop health orbs and due to the above mentioned Aura and Arcane.

The "Shield of Shadows" Augment transfers the damage Nekros would receive to the active Shadows in 50m range. You can have up to 7 shadows active and with an Ability Strength of 214% (spot landing ;)) this results in a 90% damage reduction for Nekros. More is not possible.

The "Equilibrium" mod gives you 110% energy when collecting a health orb and 110% health when collecting an energy orb. This is a matter of looting efficiency which keeps Nekros alive and restores extra energy for casting the abilities.

"Health Conversation" adds up to 3 stacks of armor (450 armor) when picking up an health orb. This further increases the survivability. 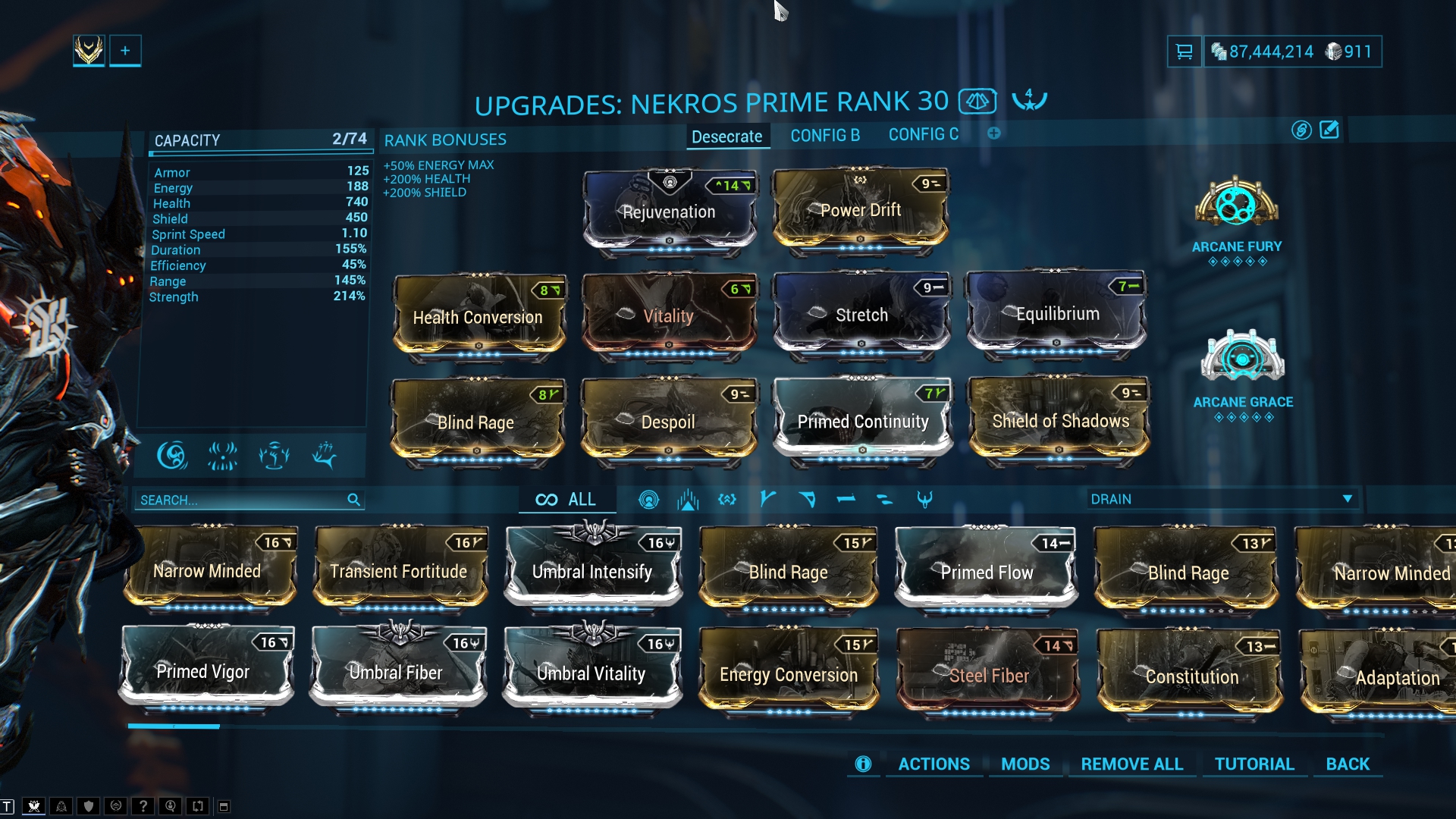