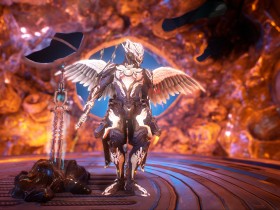 Wukong truly is the monkey king in Warframe.

His passive makes him almost impossible to kill. Actually it prevents him from dying three times per mission and buffing him afterwards.

He can use his Celestial Twin specter to "double" the damage you can do.

He can create insanely high armor values and he can heal very fast when required.

And yes, my Wukong has wings. I always wanted a monkey with wings.

Wukong can avoid death 3 times per mission using his five techniques. Randomly 3 of them will be choosen which avoids him bleeding out and restores 50% health.

Evaporate into a cloud of mist and float through the battlefield, dazing any enemy encountered, while healing Wukong and his twin.

Wukong and his twin become invulnerable and defy enemies to attack. All damage is captured, stored, and dealt back in a single furious strike of Wukong's staff. Bonus Armor is then granted relative to the damage captured.

Celestial Twin will create a duplicate specter of Wukong which has twice the health of Wukong himself and remains in the mission until being killed. The Wukong specter has access to all of the equipped weapons but will use the opposite type of weapon as the player. If the player users a primary or secondary weapon the specter will use melee. If the player uses melee the specter will primary or secondary (depending on which weapon type was active last).

The specter can be ordered to attack a specific target by pressing the ability key again. This causes bonus damage on this target.

The specter does not seem to consume ammo.

Cloud Walker can restore health to the specter for every meter traveled.

When using Defy the specter also will use Defy.

When using the Primal Fury Staff weapon the Specter also will use that Staff.

Btw. you can not cast Celestial Twin and go idle. The Twin will stop fighting at some point if you do nothing.

Cloud Walker turns Wukong into a cloud which can travel ultra fast and Wukong is invisible during that time. Status effects are removed and Wukong heals per meter traveled.

Security cameras or laser barriers are not triggered. The duration however is very limited.

When using Defy Wukong enters his defiance stance in which his movement speed is reduced and all incoming damage is stored. When leaving this state all stored damage is multiplied by 7.5 and released to the surrounding enemies. After that Wukong receives 1.5 of the stored damage as armor bonus.

Ability Range increases the damage radius, Ability Strength increases damage and also armor (max armor = 1500) and Duration applies to the length of the defiance phase aswell as how long the armor bonus is applied.

To be honest... this weapon by no means any good especially when you consider that you can not use mods like Weeping Wounds or Bloodrush. Normal melee weapons have the tendency to work equally good or even better due to the scaling nature of these mods.

If you ask me you should use the Celestial Twin non-stop since this will increase your damage output (two fighting monkey are better than one fighting monkey).

Use the Defy ability to increase your armor value when needed/regulary and use Cloud Walker if you need healing. 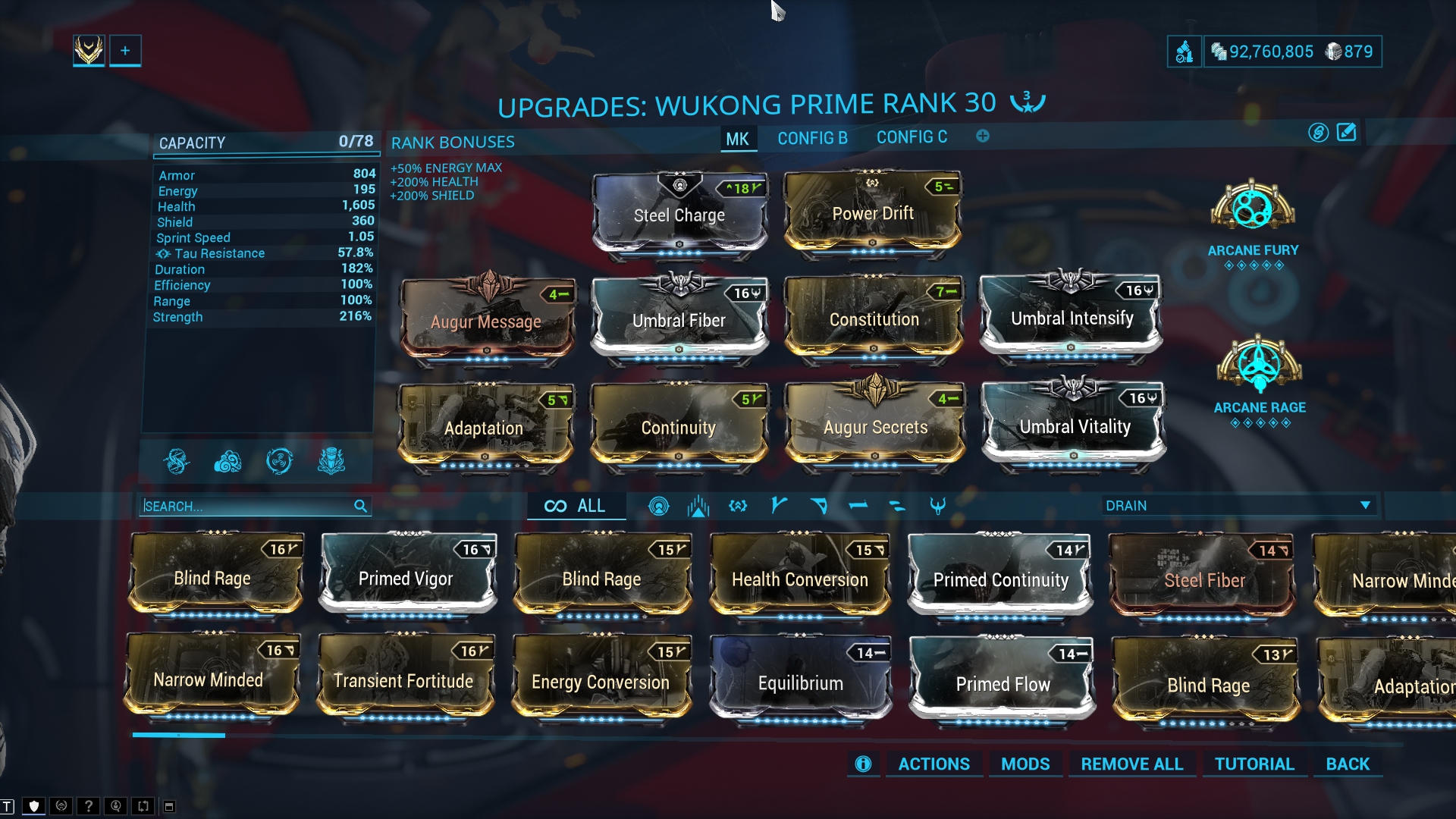 I guess with the limited amount of mod options it won't get better than that. The Iron Staff is a bit underwhelming. 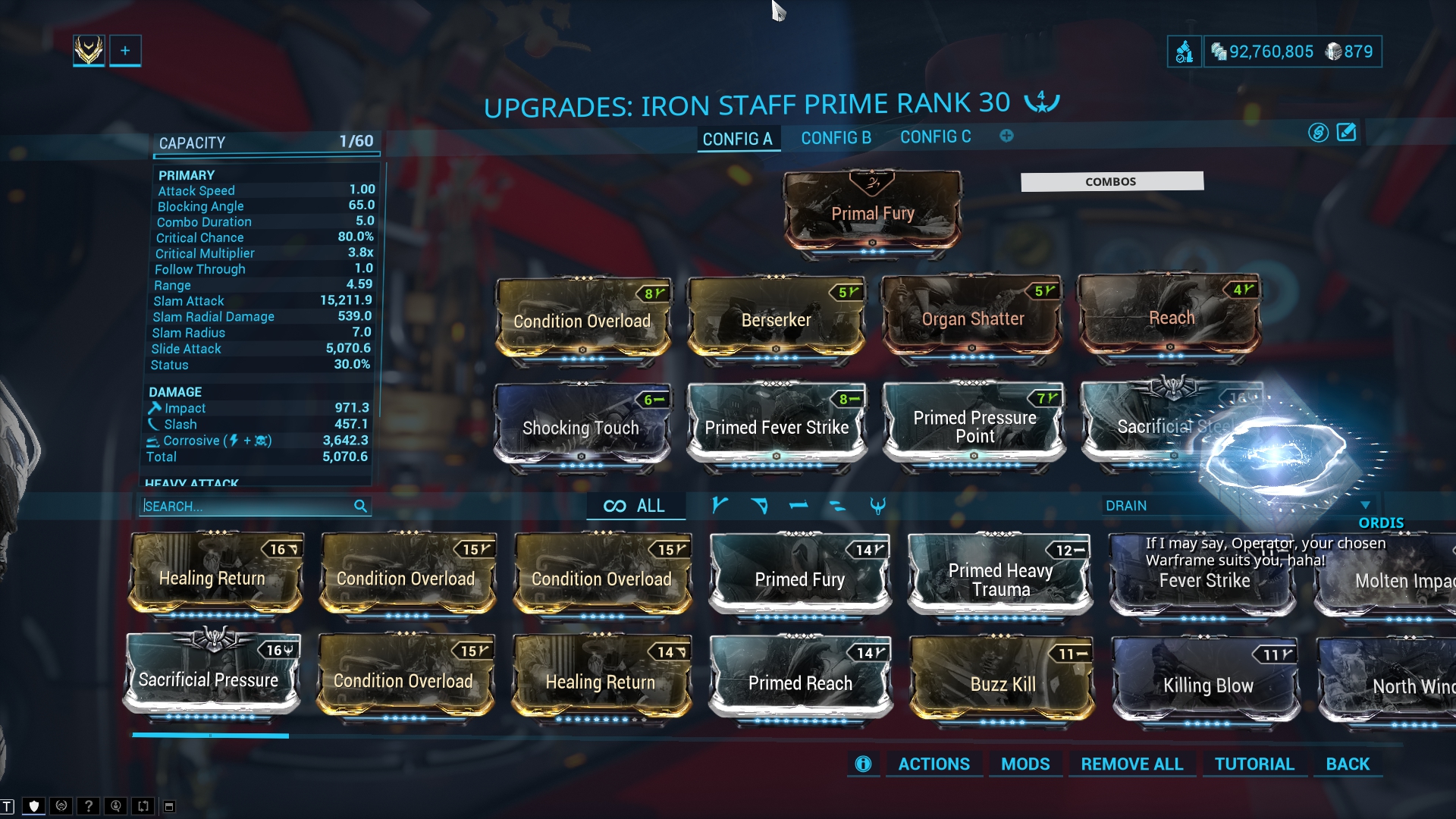