The Halls of Ascension are also known as the seven principles. These are Orokin tests on Lua based on the fundamental aspects of the game.

Each test leads to a treasure room containing rare mods which you can not get anywhere else in the game.

The Agility test can be one of the most frustrating ones.

You encounter a round room with a large organ. The tasks is to reach the top of the room, activating the organ pipes on the way up and not falling back to the ground.

On the way up you have to shot switches which activate the pipes. It certainly would be good to use a weapon with a good range to make this task easier.

You are allowed to land of the top layer of the room and plan your next steps. Only the floor of the room would reset the puzzle.

Warframes like Titania or Wukong simply can fly from pipe to pipe using their ability. Ivara can use her Dashwire to savely reach the pipes without falling down.

Most other Warframes have to jump and use their aimglides to reach the pipes.

The reward is the Agility Drift mod.

The Collaboration test is best played with a team of four players. But it can be also completed by just two players which have access to the Operator mode.

Right at the entry of this room a yellow glowing pad will lower the first row of plates. One player has to stand on this button while the other player moves to next button which now is available for activation. Once the 2nd player stands on the 2nd button the first player can leave the first one and move to the 3rd button which is at a corner of the center area of this room.

This will open an area at the edge of the room which player 2 can enter now to activate another button. This final button raises a round plate in the middle of the room and locks it in place.

The same procedure has to be repeated for all corners of the room until all 4 plates in the center of the room are locked in place.

Now both players can climb inside the center of the room.

Inside there will be another 4 buttons to activate simultaniously. If there are 4 players in the team each player can stand on one button to unlock the treasure room.

If there are only 2 players they have to stand their warframes on two of the plates and enter the operator mode. Now the operators can stand on the remaining two buttons.

If you are as crazy as I am in the video below you can solo the "collaboration" test using specters and a bit of patience.

The reward is the Coaction Drift mod.

The Cunning test is a room with four pillars which all have a crack in it.

Before you can activate the test you need destroy a buttons behind each pillar and two button on the side.

Now you can activate the test in the middle of the room.

An orb will appear and starts shooting a projectile at you. At the same time you might noticate that the cracks in the pillars are shielded now.

Your tasks now is to make this projectile of the orb hit these shield. You can stand on the pedestal behind the pillars wait until the orb spawns behind you. When it shoots the projectile you have to jump in the right moment. This will destroy the shields. You can also try to look around the corner of the pillar and make the projectile hit the shield this way.

Repeat this task for all four pillars and the treasure room will be unlocked.

The reward is the Cunning Drift mod.

The Endurance test best can be played with a team but it also is possible to do it solo.

The room is relative long with round area at one end. There are plenty of buttons in this circle.

Normally you need a very tanky Warframe to complete this test since you need to stand on the middle of the circle while all around you lasers will activate pointing directly towards the location where you have to stand.

Tasks is to survive this ongoing damage for a very long time without leaving the button in the middle of the circle.

Team members can block some of the lasers by standing in certain areas which raise platforms. This blocks at least a few lasers. Additionally team members can open fire on the buttons on the outside of the circle. This for a short duration disables the lasers emmited by the circle itself.

All this is complicated and unreliable so forget all the stuff I just wrote.

Instead do the following.

Activate the button in the middle by placing your Warframe right on it. Now look straigt up and jump. In the middle of the jump you enter the operator mode.

Your Warframe will fall back down right on that button again and the lasers start shooting at it.

But since you are in the operator mode your Warframe is invulnerable. Just wait in operator mode until the test is complete then enter the treasure room and get your reward.

The reward is the Endurance Drift mod.

The Power test is easy if you unstand how it works.

It is a large circular room with the entry to the treasure room in the middle. On two opposing sides of the room you will find two spheres.

When you get close to a sphere you will notice that the spheres start rotating and charging. This drains your Warframe energy.

Your tasks is to activate all four spheres. You have to hurry a bit since the puzzle resets if you are too slow.

Each sphere draws 40 energy. So you need 4x40 energy. Make sure that you have that amount of energy available prior starting the puzzle. Kill some enemies, collect the energy orbs and make sure to use a Warframe with a large enough energy pool. You won't be able to complete the test if your Warframe has a max energy of only 150 (unless you collect an energy orb during the activation process).

Once all four spheres are charged the treasure room opens.

The reward is (ohh surpise) the Power Drift mod.

The Speed test start in a room with laser plates on its sides which point different directions.

Shot on the buttons above the entrances to that room.

A small pillar will rise.

Next to that room is a small hallway with doors. Infront of them are activation triggers.

This will open the doors and you have a very very short amount of time enter this door, run through the corridor, take the turn right twice... and reach the next door before it closes.

If you are fast enough you can activate another button on top of the exit door and have this section of the test completed.

Now you have to repeat this process on the other side of the hallway a second time.

These speed passages are filled with Thumper Orbs, obstacles and areas which slow you down. You need to avoid these somehow. You can repeat the test as often as you want. It is unlikely you will finish it on the first try. If you fail deactivate the Thumper Orbs by shooting them.

When you have completed both sides the treasure room unlocks right above the pillar. Climb it and get your reward.

The reward is the Speed Drift mod.

The Stealth tests happens in a very large hall with a large golden glowing pad at one side.

When you step on it the test will start and yellow and blue laser barriers activate.

Now you will have to reach the other side of the hall without being detected. If one of the blue lasers hits you the test will fail instantly and can not be repeated.

In theory you can use a stealth Warframe to cross the area undetected.

Or you ignore the activation pad, go to the opposite of the room (where you will find the treasure room door) and stand right on the middle of that door/plate. Now you enter the operator mode and go back to the pad which activates the test.

Step on that golden plate and instantly have the test completed because your Warframe obviously has reached the opposite side of the room already.

Stealthier than this it won't ever get.

The reward is the Stealth Drift mod.

You have mastered the Seven Principles of the Orokin (in more or less creative ways).

The Lua Music Puzzle randomly/rarely appears on Lua maps. It is not part of the seven principles but should be done nonetheless. It rewards the players with a Octavia Chassis blueprint uppon completion and also spawns a container left of the activation switch which has a chance to contain a crafted Forma.

The chance to get a Forma is enough reasons not to skip this room when you encounter it.

The task is easy.

Activate the switch and the music instrument will play 5 tones. You can see a blue glow on the pads which produce the tones. Just repeat the sequence of tones to finish the puzzle.

The sequence always is the same. 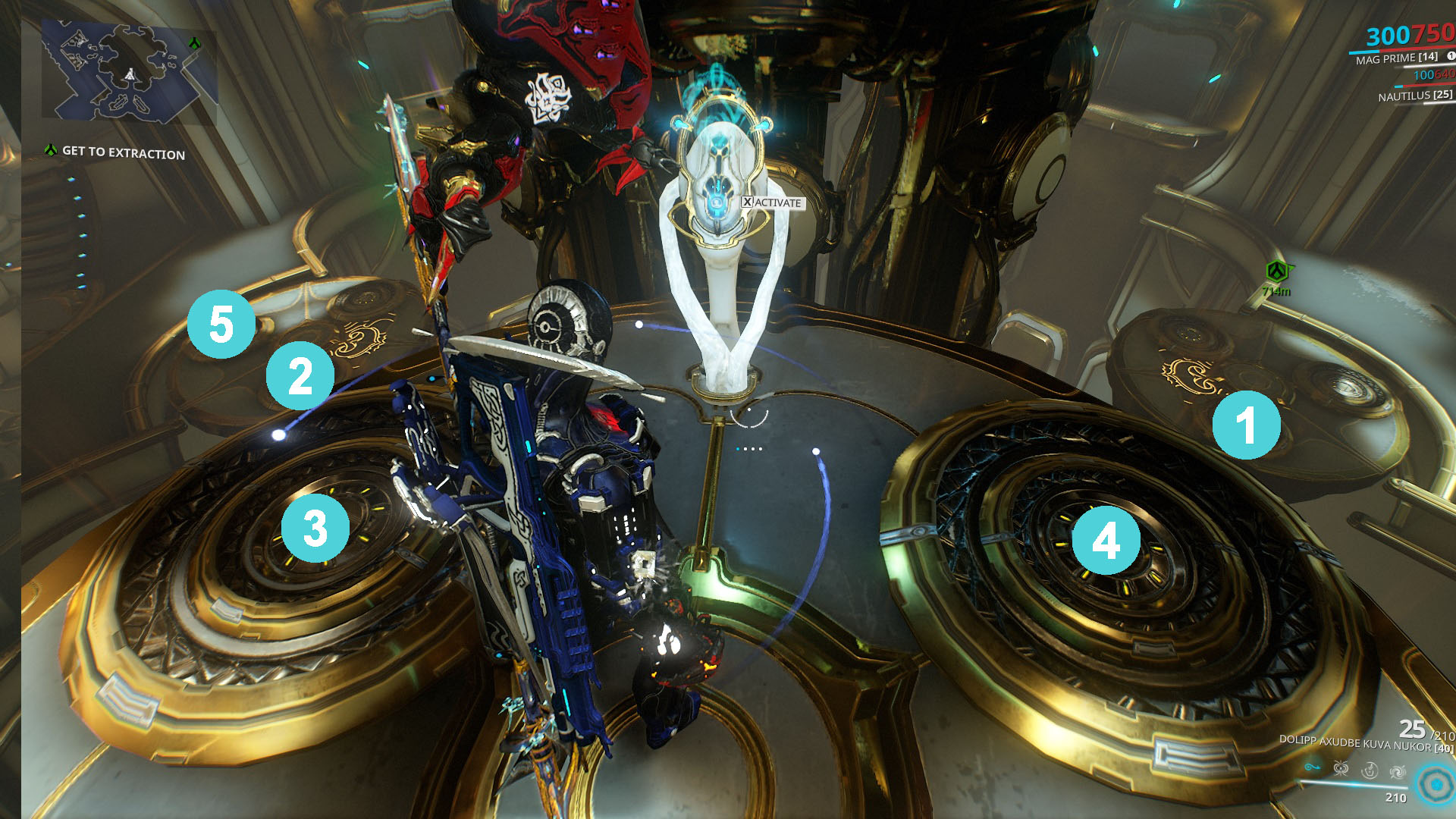