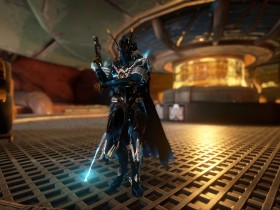 By many players Volt is considered an excellent Warframe, especially for Eidolon hunting.

He has some unique benefits such as being able to increase his speed and that of other players and he can use shields to protect certain areas. He even can carry this shield as personal protection.

Volt is the top choice for Eidolon hunting since shields can amplify the damage done. He is good at crowd control, but his abilities in regular gameplay on high difficulties are not strong enough to clear the map (on lower difficulties this works perfectly fine). He is good at focus farming on Elite Sanctuary Onslaught but on Steel Path and Arbitrations the damage output of his abilities is not high enough to kill enemies. He is still a good option for these high difficulties since his crowd control abilities give you enough time to kill the weakened enemies using your normal weapons.

Volt has clear benefits using the Helminth system, but I might explain that at a later point.

Walking, running, or sliding will build up a static charge which adds bonus damage (5 Electricity damage per meter) to the next weapon attack or ability. Maximum bonus damage is 1000.

Jumping or Bulletjump does not increase this bonus damage.

Launches a shocking projectile. It stuns and deals high damage to a single target and chains damage to nearby enemies.

Gain a brief boost of movement speed which affects all allies in range.

Volt deploys an obstacle of energy, providing cover in any situation.

It is possible to pick up this shield and use it as small personal cover shield.

Paralyze nearby hostiles with a damaging electric charge, this also shocks approaching enemies.

The sorting has not changed here since I think this is exactly the correct one by default.

The first ability in my eyes is not very useful.

Ability 2 (Speed) is great on Capture, Sabotage, Spy and Rescue missions since you and your team can reach the mission target very fast.

Ability 3, the Electric Shield is a good way to protect defense targets. It also is the key element of Volt one-shooting Eidolons (description below).

Ability 4 is for Crowd control. It shocks enemies and kill them on low level missions. On high level missions the shock duration can be used to freely attack the stunned enemies using normal weapons.

The Duration build is for Crowd Control and works on all difficulty levels, including Steel Path and Arbitration. Aim for this build is not to kill enemies with your abilities but to stun the ones getting too close to you. The Ability Duration and the Efficiency are important since you want to stun them long enough to be able to kill the enemies and you want to use the 4th Ability pretty often so you need to keep the energy drain low.

The "Capacitance" Augment will give you and your squad members overshields when activating the 4th ability. This is an extra layer of protection to keep you alive even on higher difficulties. 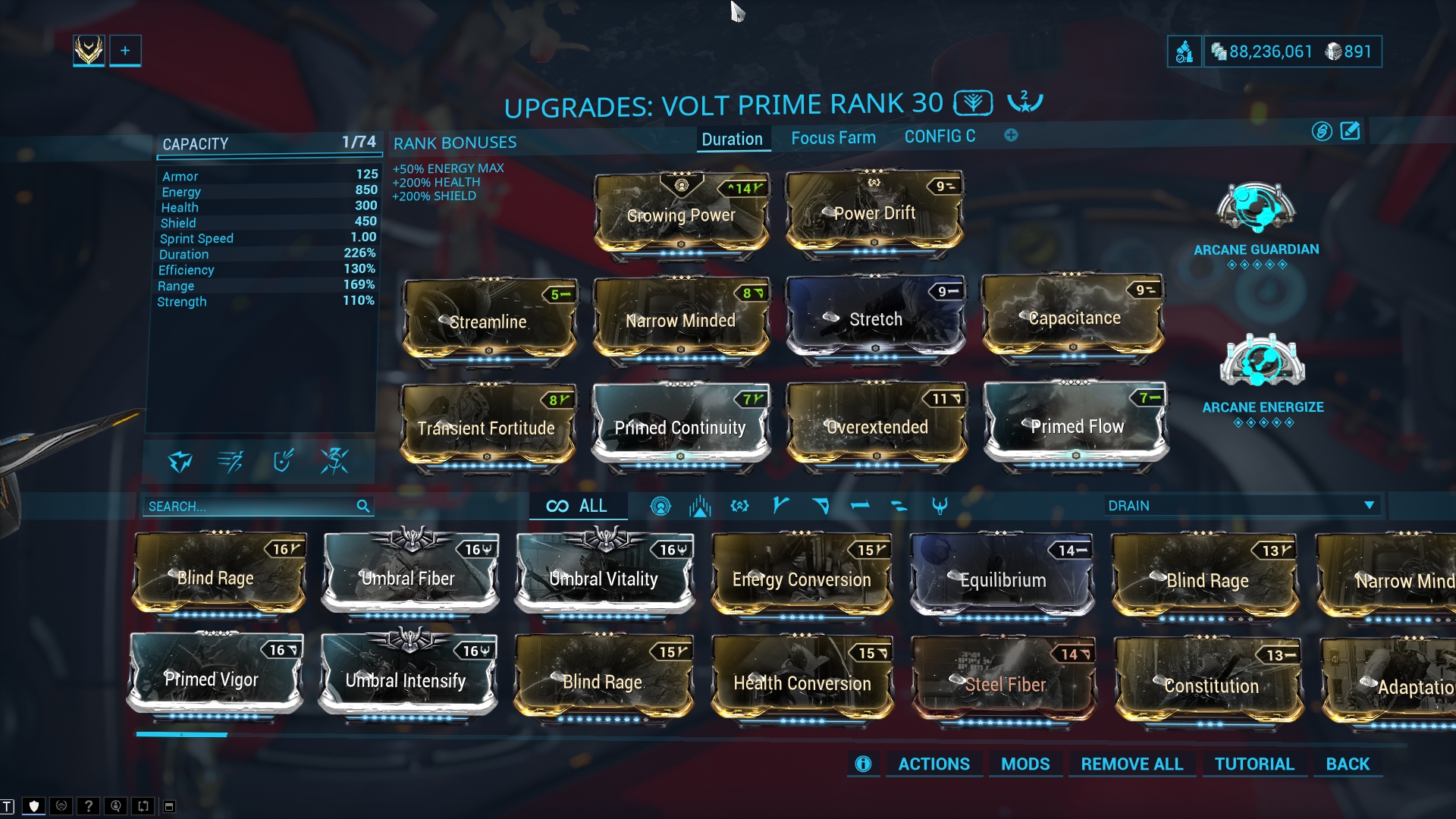 This build focuses on having a higher Ability Strength and a much higher Range in order to kill as many enemies in a short duration on Elite Sanctuary Onslaught while the 2 minute focus time is running (at the beginning of each wave, starting with wave 2). Casting the 4th ability will deal huge amounts of damage to the enemies in a very very large area and kill them. When needed spam the ability again. 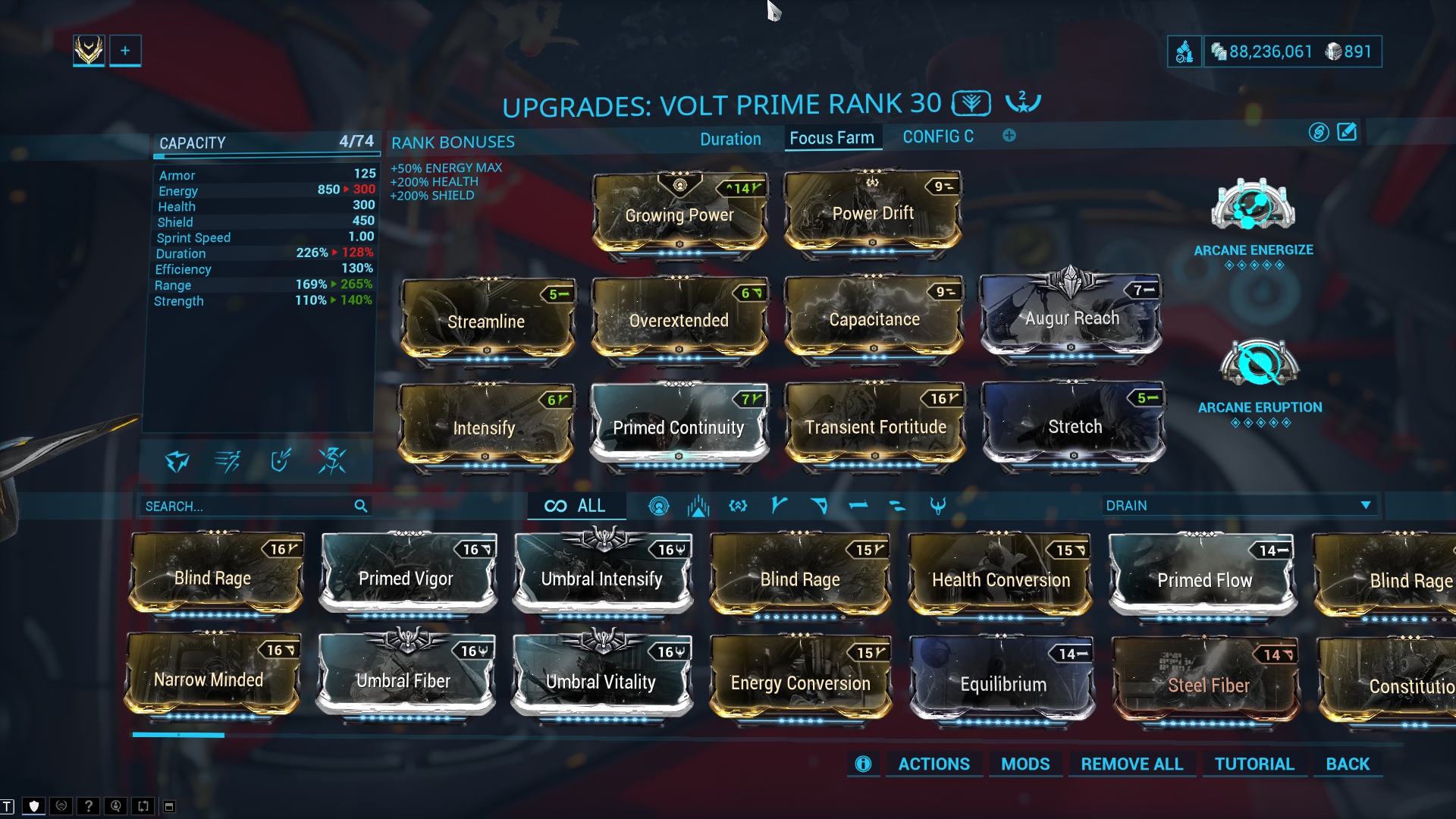 If you ever played Eidolon Hunts you probably have seen players one-shooting Eidolons during the damage phase.

The players use Volts and the mechanics behind Volts 3rd Ability aswell as the Void Strike Operator Ability from the Madurai Focus School.

The video below shows you my Rubico Sniper rifle and how much damage it does just using my Eidolon build for it.

By default you can see ~5000 damage done to the Heavy Gunners.

What I did next was to place 6 times the Electric Shield ability Volt can use (6 is the maximum). The Electric shields does not only protect Volt, it also adds a 200% crit damage multiplier to every shot fired through that shield (only applied once) and +50% electic damage per shield.

The sniper weapon I use is modded for radiation damage (because Eidolons are weak to radiation) and one component of radiation damage is electric damage. So firing through the 6 electric shields did boost the damage output from ~5000 to ~25000. Great!

But not good enough for Eidolon hunting.

Here you have to utilize the Madurai Focus Tree and its Void Strike Operator ability. For every second you spend cloaked you gain a 12% damage bonus on your next 8 shots.

Volt players remain cloaked as long as they can. They don't use their Amps they don't attack other enemies. All they do is charge their Void Strike to increase their damage multiplicator which is shown in the top right corner of the screen as soon they leave the cloak.

And then they place their electric shields and fire through them to put that one bullet right into the Eidolons weak spot.

This is why Volts with a good Sniper rifle, modded for Radiation damage are the best Eidolon killers.