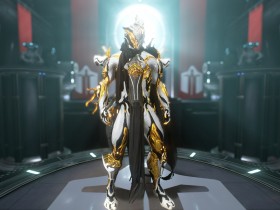 Excalibur was the very first Warframe in the game and has become the poster boy in the following years.

Generally you would assume that he is outclassed by most other frames meanwhile but that simply is not true.

This guide is not about the normal starter frame and this also is not about the Excalibur Prime. The Prime version is something nobody of us ever will get to use since it is exclusively for founders which supported the game in the early days.

That however is no big deal since we have the option to use the Excalibur Umbra instead (which has even better stats than the Excalibur Prime).

You can get it for free by playing one of the story missions (The Second Dream) and once you have it you never want to look back to the ordinary version.

Excalibur Umbra is special because it comes with 3 Umbra Polarity slots and also 3 Umbra mods. It is pretty much the only Warframe of its kind. Umbra slots are extremely rare to get and are usually only available once or twice a year in a very limited amount via Nightwave rewards.

Having these 3 Umbra slots allows you to use all of the 3 Umbra mods at reduced capacity costs (even though upgrading these mods is very expensive).

However, it is worth to mention that most of the builds I have for other Warframes utilize Umbra mods anyways (even though I try not use to use any Umbra Forma if possible).

Umbra mods increase their values if used combined. They also have Tau resistance which reduces damage done by Sentients.

I have three builds for Excalibur, which are all based on one of the Abilities: the Exalted Blade.

Exalted Blade is a Melee weapon (a Skana with pretty high damage and range) only Excalibur can use when activating the 4th ability or for a single slash when using ability 1.

This weapon requires to be modded aswell (be aware that this also costs Forma). Detailed instructions will follow below.

Generally said, Exalted Blade is pretty powerful due to its high crit values aswell as an extremely high status chance if modded correctly. But it drains energy over time when being used.

The goal of all these builds is to make the weapon as powerful as possible while also reducing the energy drain.

The drain by default is 2.5 energy per second. Ability Duration and Ability Efficiency can lower this value.

The Aura mod Energy Siphon can be used to gain 0.6 energy/s. It might not even be required to use this Aura (it depends on the mission). Alternative Auras could be anything that increases damage or reduces armor (of course if the polarity matches).

Arcane Energize is the most useful Arcane in this build since when maxed out it has a 60% chance to give you and all team members 150 energy extra whenever you pick up an energy orb (15 seconds cooldown).

If done right you can use Excaliburs 4th Ability nonstop since your drain will be low enough to be compensated by collecting an energy orb every now and then.

Ability Strength has direct influence on the stats of the Exalted Blade aswell as the total damage output.

This will release projectiles all around you dealing high damage to enemies in range. Not a bad ability but very situational.

Stun enemies around you for a short duration. You can use that but on the other side... you can also just simply kill them.

Radial Howl in my eyes has only one good use. It removes the damage resistances from Sentients, which makes Excalibur Umbra the perfect frame in missions against these types of enemies.

The main ability you would want to focus on. Cast the Exalted Blade which you can use like an ordinary Melee weapon as long you have energy.

The first build does not need any Forma. Perfect build for beginners.

The energy drain is very low on this build but the damage output is not the highest (still good enough for normal star map missions).

One backbone of all Excalibur Umbra builds is the Augment "Chromatic Blade" which increases the Status chance by 300%.

In this build the max Status chance you can achieve on the Exalted Blade in combination with "Chromatic Blade" is 543% which by itself is insane. For the next build you need exactly one Forma.

This one has a higher Ability Strength and therefore causes more damage. The Status Chance is increased to 708% on the Exalted Blade. (Ability Strength increases all the weapon stats)

The energy drain is slightly higher but still manageable. For the build with the highest damage output you need 3 Forma.

The total damage is more than 50% higher than in the very first build and the Status chance for the Exalted Bladed is at 839%. The energy drain however is about 40% higher than on the first build.

Since I have a maxed out Arcane energize I never really had any problems with energy. Ability 4 is active nonstop and deals insane damage. 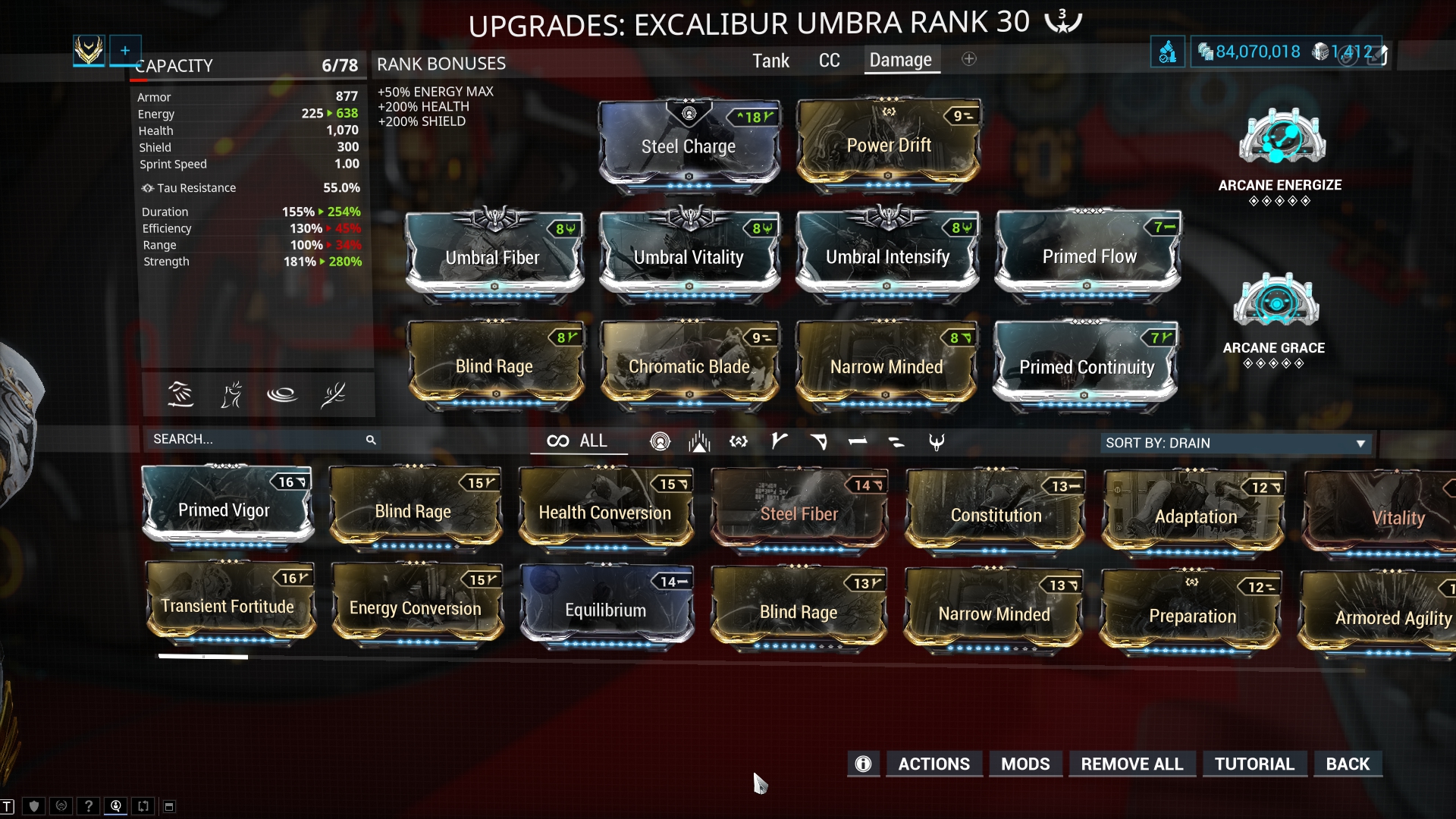 All of the above of course only works if you put a bit effort into modding the Exalted Blade aswell.

This unfortunately involves a bit more Forma if you really want to maximize the damage output.

Worth to mention at this point that the "Chromatic Blade" mod that is used on Excalibur Umbra also changes the damage type of the Exalted Blade based on the emissive color. Orange would result in heat damage and strips armor. Combined with viral damage in my eyes is the best option at the moment. Of course a Corrosive build also works perfectly fine.

I have two build for this weapon. The first one does purely focus on dealing damage while the second build makes use of the Healing Return mod which regenerates my health while I attack enemies.