Saryn most definitely is one of the most powerful Warframes in the game.

Her damage dealing abilities are superior to most other Warframes and make her a good choice for high level content such as Steel Path and Arbitrations.

However, I think Saryn shines most in Elite Sanctuary Onslaught since she can max out the daily Focus Points in 8-10 waves if you have a good focus lens equipped on her and her weapons.

You can solo ESO or carry a group of weaker players in ESO with ease up to wave 11-12.

Her survivability also is pretty good if modded correctly.

This one actually is pretty cool since status has become much more useful a few months ago. An increase in status duration by 25% also increases the damage output of most weapon builds aswell as Saryns own abilities.

e.g. if you use ranged weapons which rely on slash status procs to kill high-level enemies this results in an up-to 25% damage increase for that weapon (most certainly a bit lower due to the primary damage of the weapon before the status procs).

Shedding her skin like a snake, Saryn leaves a decoy behind to draw fire from enemies.

Releases a poisonous miasma that deals Viral damage to enemies in range. Foes afflicted by spores are more susceptible to the mist.

Inflict a target with a pox of Corrosive spores. Spread spores to nearby enemies by destroying them or killing their host. The longer the Spore spreads, its damage will increase.

All four Abilities of Saryn actually sound nice. Viral, Toxin, Corrosive damage are awesome and having a decoy that takes damage also sounds great, at least on paper.

However, Ability 2 (Molt) does not create a decoy with enough health to actually be useful on higher difficulties. This ability is in my eyes way to unreliable to be used. The energy is better spent on the other three abilities which can kill enemies fast enough that you wont even need a decoy as protection.

Saryn is one of the best damage dealers in the game with her very first ability actually being the most powerful one.

Ability 3 serves the purpose of making the attacks (including Ability 1) even more powerful.

Ability 4 also increases the damage of your attacks (incluing Ability 1) and even ensures that the spores of Ability 1 can spread to further enemies.

Saryn builds have a small issue related to Ability Strength.

If you play difficult content you want to have a high Ability Strength since you can deal high damage using her Ability 1, 3 and 4.

The "problem" is that Ability 1 would in theory run as long as the spores can spread. Spores only spread if the hosts get killed or the spores are destroyed manually. That means you have to deal extra damage on enemies using your weapons to kill enemies. If the enemies are solely killed by the spores or I guess a fitting term would be "consumed by the spores" then the spores wont spread to other enemies.

You always have to make sure that an enemy that is infected by spores is killed in a traditional way so these spores can spread further.

This is generally great if you play high difficulty missions as the increasing damage lets you kill enemies faster.

The problem is that this does not scale well with low difficulty missions since the damage done by the Spores kills their hosts way too fast. You will not have the chance to kill the hosts in the "traditional" way. You just wont have the time for that and since the Spores can no longer spread, Ability 1 will deactivate once the last enemy was "consumed by the spores".

High Ability Strength makes Saryn an awesome Warframe to use in high difficulty missions but that high strength does not work well in lower difficulties.

What you can do is to create different builds. One with high Ability Strength for high-level missions and one with low Strength which at least gives you the chance to use Saryns abilities in low-lvl missions without constantly wasting energy to cast them.

You most definitely want to have a high Ability Range in order to spread the spores to enemies far away and therefore to as many enemies as possible.

I don't think that you will need much Ability Efficiency since you can kill many enemies very fast with Saryn and collect the energy orbs they drop.

Ability Duration matters most for Ability 3 and to a limited degree to Ability 4. But since Ability 1 is the king here Range and Strength are the values you want to focus on. 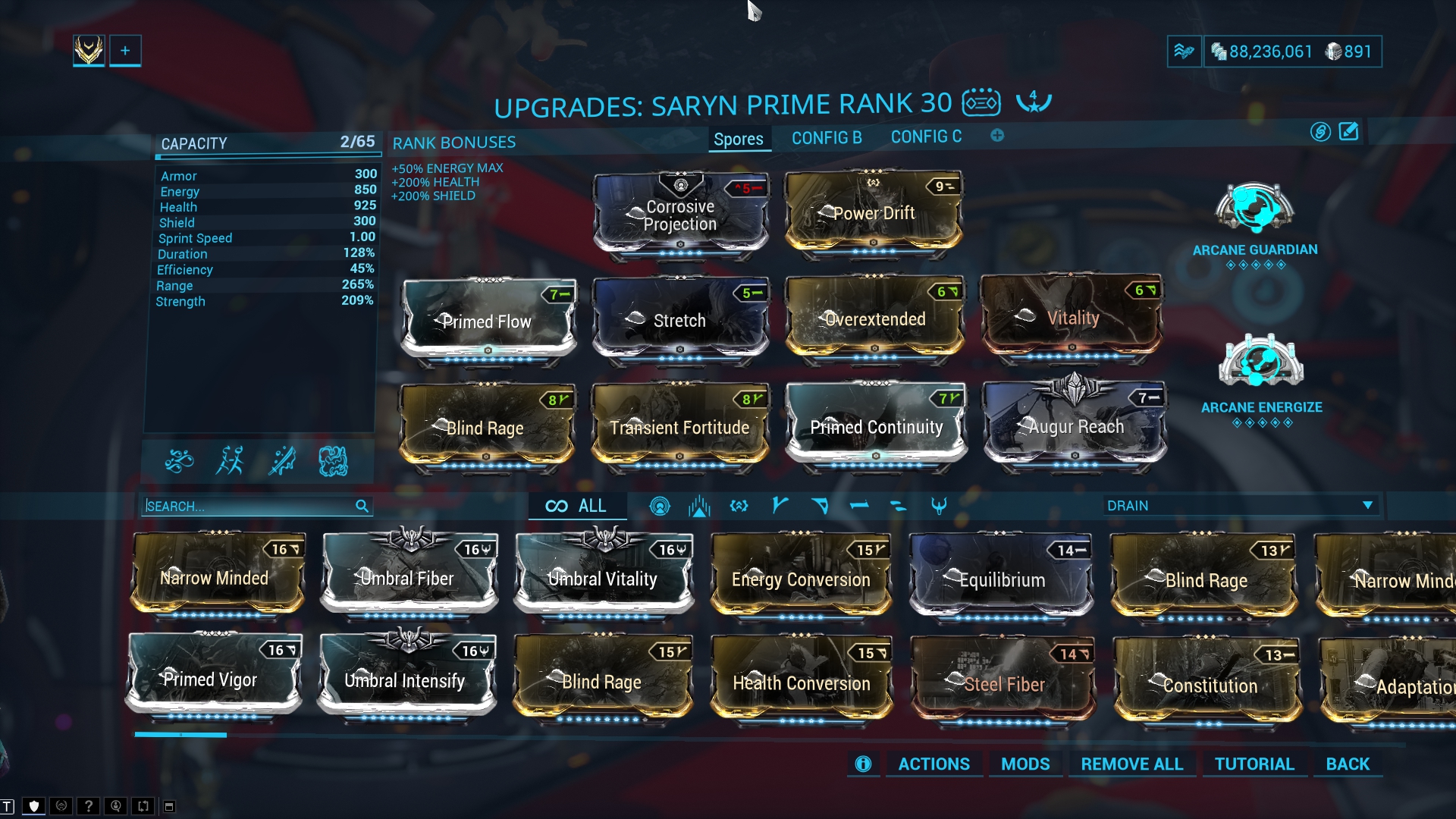