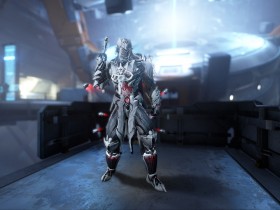 Atlas certainly is not the easiest to use Warframe in the game and is in my eyes very limited in his build diversity.

He is not intuitive to play and requires to know what ability to use in which situation and also which weapons you need to take into combat.

It took me some time to notice how I actually can deal some damage to higher level enemies with this Warframe.

He is a bit tankier than most of the other Warframes but nowhere in the region of Rhino or Inaros.

If modded correctly his abilities can be very powerful.

Atlas is immune to knockdown.

Summon a rock-wall, activate again to send the rocks crashing towards the enemy.

Summon two elemental stone brawlers to the melee. Summoning petrifies enemies in close proximity to Atlas. When finished, Rumblers collapse into a pile of healing Rubble.

Bash enemies with an exploding sliding punch, and repeat for a devastating combo. Petrified enemies take extra damage, and drop Rubble when destroyed. Rubble can heal Atlas and bolster his armor.

Rumblers at least can be useful to distract enemies and they deal some damage to lower level enemies, so it is not strong ability but also not totally useless.

Petrify is your healing ability on Atlas. Petrified enemies leave rubble when killed which either heals Atlas or increases the armor when health already is full.

Landslide is the damage dealing ability but it by itself won't do much. For Landslide to work you will need a good stat-stick. That means Landslide will deal damage based on the stats of the mods on your equipped melee weapon. Whatever damage value you have on these mods, whatever crit chance, crit damage, status chance etc. is used to calculate the damage done by the Landslide ability.

It is important to mention that the stats of the weapon itself is mostly irrelevant since the damage is calculated based the mods on the weapon. Exception to that are melee weapons with special abilities such as the Venka which has a max combo counter of 13 instead of the usual 12.

Combo Counter increases when Landslide is used and adds +25% damage for each combo rank, up to x3.75 for normal weapons or x4 for the already mentioned Venka.

Before using Landslide you want to Petrify them in order to do more damage and also heal Atlas. This also will turn enemies into stone for a certain amount of time. 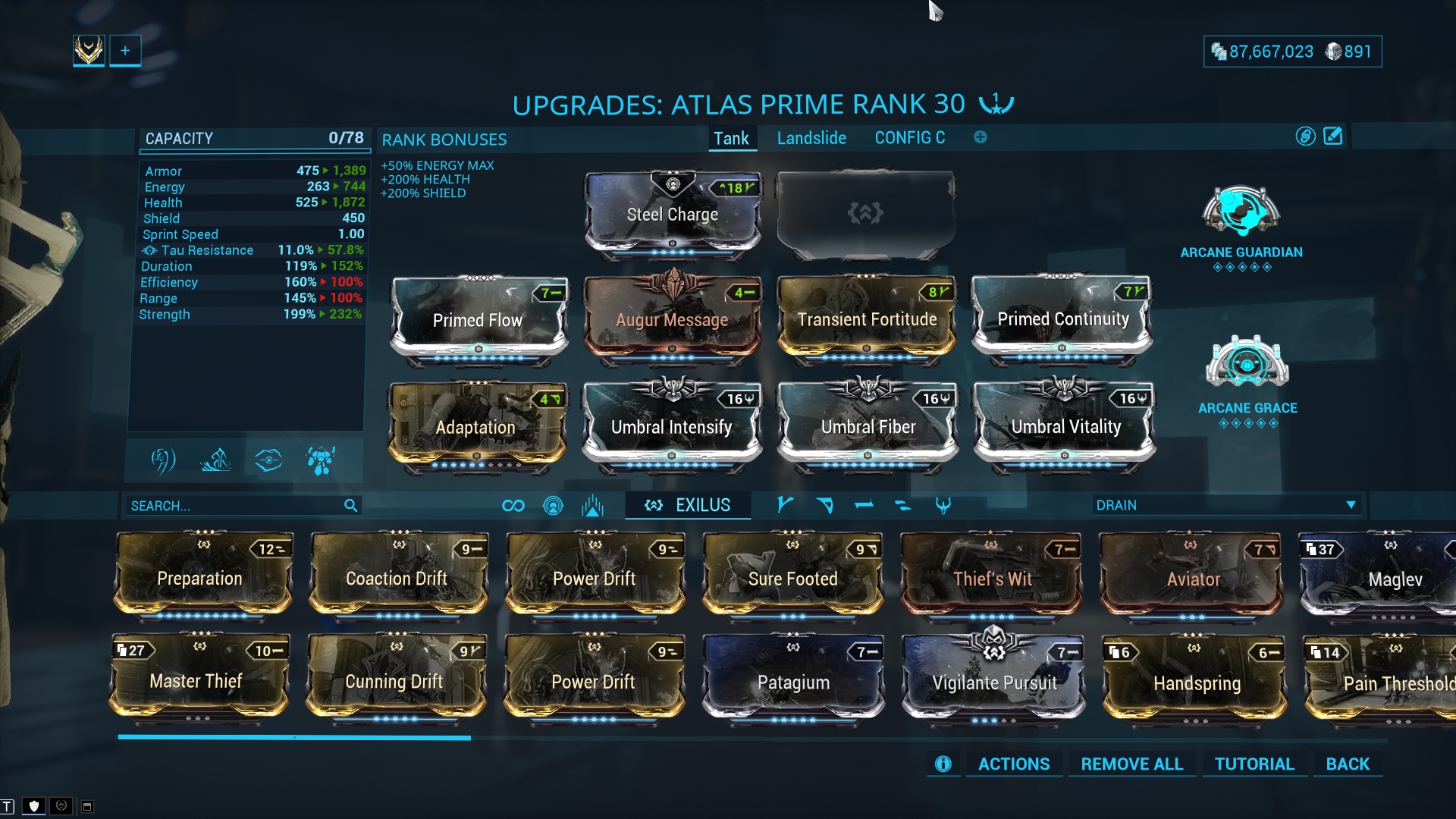 This build is straight forward just to turn the Atlas into a tank with high health, decent shields and also high armor values. It has no further benefits. You would rely on your normal weapons to deal damage when using this build.

Benefit: Only one Forma is required. 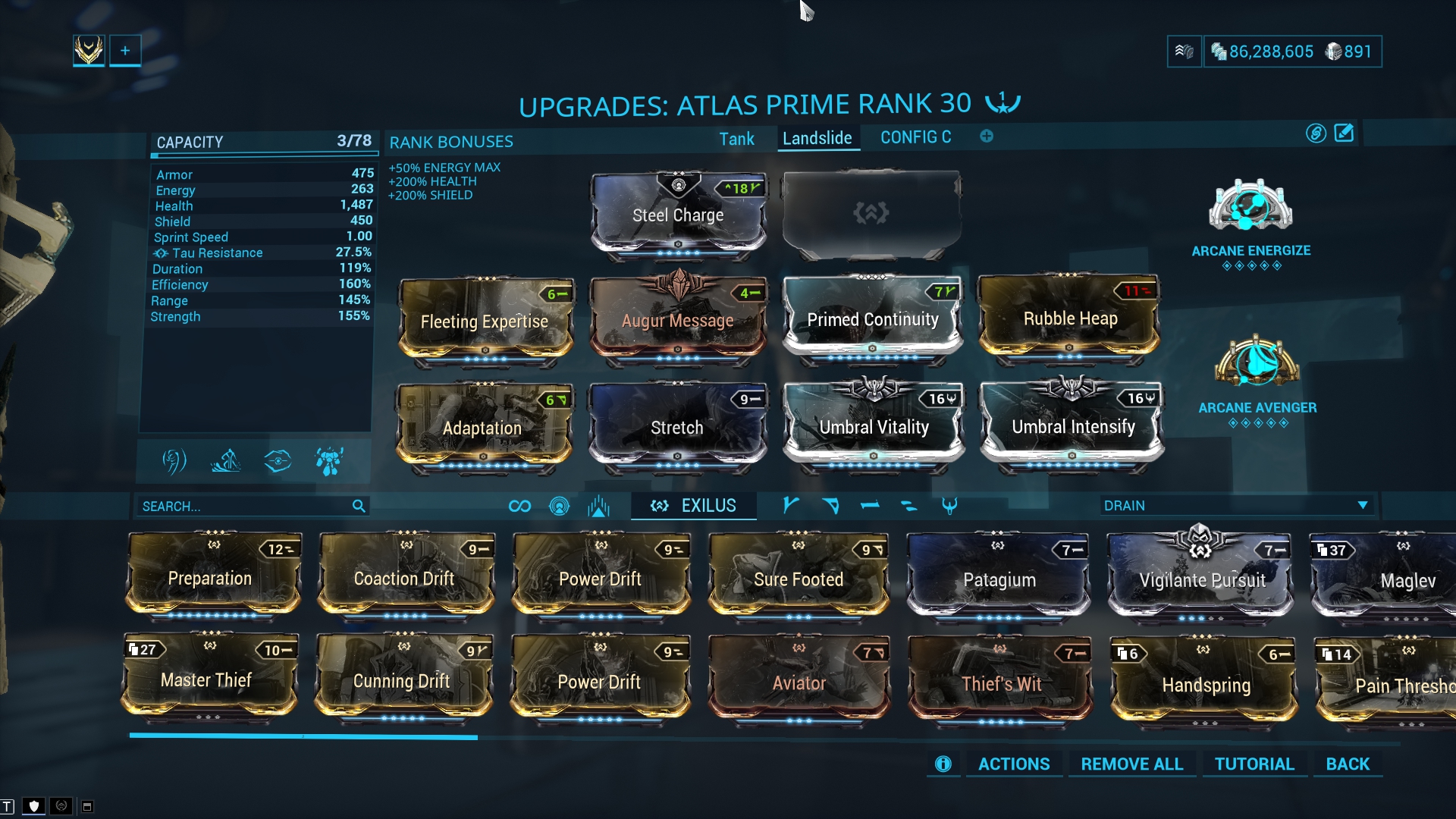 The Landslide build combines the use of Ability 3 and Ability 1 (preferably in that order).

First you Petrify enemies and then you kill them using the Landslide Ability.

Landslide highly depends on the mods used on your melee weapon which is considered a stat-stick.

For this build you want a high Ability Efficiency since you are going to spam the abilities. An above average Ability Duration helps to keep the enemies petrified. Ability Range increases the range of Petrify and Landslide. Ability Strength increases the damage done by Landslide.

Since you need all four values a balance between Efficiency, Duration, Range and Strength had to be found.

The mod setup above offers such a balance with just one Forma used.

While killing enemies using Petrify and Landslide you will collect rubble. There is a small meter on the lower right corner of the screen which shows you how much rubble you have collected. The maximum is 1500.

The Augment mod "Rubble Heap" allows you to use the Landslide ability without any energy costs once you have collected 1400 rubble.

Arcane Energize grants you the chance for bonus energy when collecting an energy orb (the most useful Arcane in the game).

Arcane Avenger has when maxed out a 21% chance to add 45% Crit Chance to your attacks for the next 12 seconds when taking damage. You will take damage, don't worry about that. This is a additive bonus.

Landslide by default has only a 5% crit chance. The 45% from Arcane Avenger really make a big difference. Spoiler: There are better weapons than the Stropha for the purpose of a stat-stick. e.g. the Jaw Sword has a Augment mod which adds +100% damage. There are also other weapons with unique benefits that would be better as Stat-stick. My reason to choose the Stropha is simple... I already had a good amount of Forma on it, which allowed me to use plenty of damage increasing mods. Organ Shatter and Gladiator Might to further increase the Critical damage of the Landslide (which by default is 200%).