Ajay's Story: Yet Another Homecoming.

-Yes, everything is alright - I've reported to my commander via the comlink. - The Hypergate is completely usable.
-It delivered you to Inner Core system?
-Yes, straight from the anomaly Hypergate in the Omega 3 uses. Currently I'm in Weth. Mirtrak Battle Station.
-Very well - Flyagin said. - You need to return back. There is something we need from you.
-Namely? - I asked.
-Do you know why you have been suspended?
-Let me guess, being friends with Dom'Kavash? - I replied.
-Partly. But there was another reason. Some time ago, "Gorshkov", a Czar-class carrier, came under attack from Warrior heavy fighters. In Nedjef.
-Yeah, I've heard about it.
-It was a precedent. During that time a freelancer named Edison Trent was aboard the carrier.
I nodded. Edison Trent was the first human to make contact with the Dom'Kavash. Never seen him with my own eyes though.
-So far, I have been tasked to keep an eye on you. By the way, since you are a Coalitioner that has fought Great Doms, you are yet another proof to the need of a ceasefire with theDom'Kavash. And now, since the Hypergate is now working, we'll be able to send reinforcements to the Dom'Kavash.
-That does not explain why you needed "Stranger" taken away from me.
-It needed the maintenance repairs - Flyagin answered. - But I have suspended you because of the knowledge you have,or should i say, we have, thanks to you. Your scouting missions and operations in the Inner Core brought us a lot of information. I was ordered to keep you here for a while, so you will be at the ready. The Advisory knows of your wanderlust, but they needed you ready to move out, not stuck in some ass end of nowhere.
-And what do I have to do now?
-Head to CNS Gorlowka and wait for further instructions. Of course, when you're ready - take your time if you have something to be done, but we don't have the eternity.
-Roger - I said, and my commander disconnected. I returned to what I had been doing before his call - cleaning and oiling my AGS-4.
AGS-4 - Automatic Gyrojet, Self-defense - is one of the standard issue Coalition handguns. Large and heavy explosive-propelled mass driver pistol with an ability of automatic fire, AGS-4 was based on an ancient design of Stechkin Automatic Pistol, made with new materials. Rounds for the AGS were the same size as it's predecessor, 9x18 mm, but with microscopic rocket engines that activated after the bullet left the barrel, like the ammo of ancient "Gyrojet" designs. It could fire usual bullets as well.
When I needed to calm down and relax, I usually did the maintenance, either of "Stranger" or of my handgun.
It was an award. For some secret mission that I should have forgot - and I did due to the special chemicals. What I can say is that I have agreed to erase these memories.
Anyway, before I had left Coalition space for the first time, I've just kept it in the case. When I left to Sirius, though, I took it with me - who knows what awaited me in Sirius. If only I knew...
Great, now I have reminded myself of these times.
Of the times when people on the stations were on the verge of freaking out by just seeing me because of that uniform. Then that just kind of died out, people on the stations I was landing on a lot came to thinking that "the Coalitioner" was just kind of there, and people on the other stations just didn't give much attention to the symbols.
I sighed and returned to the disassembling of my gun.
Wonder whether all these things that happened to me were too bad or too good. The ultimate answer was found swiftly - too good - as well as the reason.
I would have never gotten "Stranger" if all of this had never started.
Soon after I was done with the maintenance, I headed back to the cockpit. It's time to go. 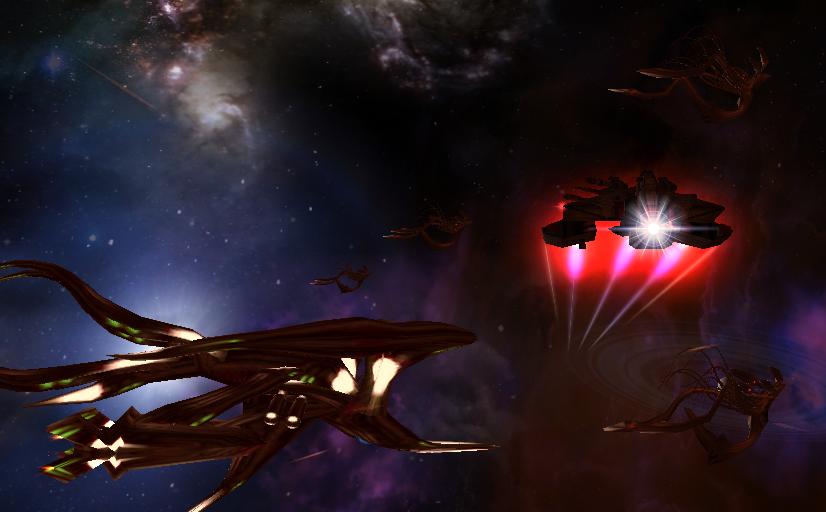 I sat in the cockpit, flying back home. Luybe's "Carry me, the river" was turned on the music player. The engine trinity of "Stranger" rumbled along and a cup of Earl Grey tea was standing on the table to my right. My usual amulet was standing nearby - on the top of Chimera APC miniature. My peaked cap rested to my left.
How many times I have flown through here?
How many times will I fly through here again?
I do not know, and, quite frankly, I do not care.
I just keep flying.
Eventually systems pass, until I reach Sovetskaya.
No matter how far away I fly, I always return there. I always return home.
I wonder maybe that there will be a day I will return here once and for all.
But until then, I will keep flying around.
Flyagin messaged me and told me to head to the bar of CNS Gorlowka. Well, won't be a problem. 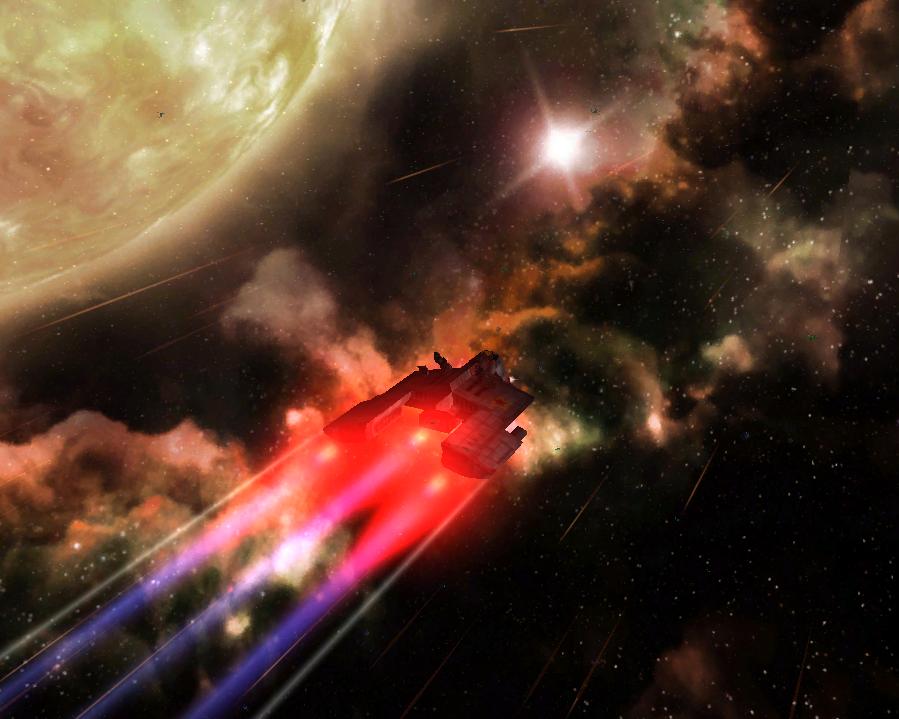 In the bar of CNS Gorlowka, a woman in the Coalition Capital Navy uniform greeted me. I saluted her and introduced myself.
-Coalition Intelligence Directorate. Senior Lieutenant Ivan K. Callsign Ajay.
-Coalition Capital Navy. Second Rate Captain[1] Natalia Kameneva. Commander of CNS Gorshkov. - she replied. - Good to see that Flyagin had a chance to introduce you personally.
-Can I be of any use? - I asked.
-The details are classified, but I need you to tell me anything there is need to know about Inner Core. The fallback ways. Safest routes. Weaknesses of the enemy.
-All my experience - all yours, comrade. Let me show you the navmap...

-...and the Weth system is where the Dom'Kavash hold the line. If they are still alive. Last time I was there, they were in pretty bad shape. - I finished the speech and sipped the tea from the cup.
By this time, we were already sitting at the table. My conversation partner listened to my explanations with full attention.
-Basically, once you're in Weth, consider yourself relatively safe.
-Good - she replied.
-Then you will need a Phanchdar system. The hypergate located there will take you to the Altair. That is all.
-Thank you very much, Ivan. This information will save many, many lives.
It's been a while since I've heard a woman calling me by my own name. Especially if said woman isn't related to me or a certain former subordinate of mine - and the latter was super annoying due to her use of diminutives.
-Be online, because it's not unlikely me or Flyagin aren't going to need you soon - she continued.
-You know the subspace connection can reach me anywhere - I said. - May I go?
-Yes. Good luck.
-Good luck to you too - I replied and headed to the exit.
-Wait a second, Ivan - she said as I made three steps.
-Yes? - I asked, turning back to her.
-Maybe, if you are free, you can tell me some stories of how you fought there. Flyagin told me about some, but I'd like to learn that firsthand. I'm completely free this afternoon, so we can spend it here... or maybe you will offer another place?
"This is your chance, Ajay! Chance to end your loneliness once and for all, GO FOR IT!.."
If you think this is what I started thinking about, you DO NOT FLAKKING KNOW Ivan "Ajay" K. I have rid myself from even dreaming about that long, long ago.
Besides, my author would have retconned this if I'd accepted. Wait... oh snap, I've broken the 4th wall. AGAIN.
-I'm sorry, but I'm afraid I won't be able to accompany you - I said, making a fake smile. - Maybe some other time.
And with that, I left the bar and headed to my ship.

Author's Note:
This story is of questionable quality. I do not expect you to like it very much, and it may or may not be a subject of deletion or retcon due to being flakking stupid. I leave it to your judgment. Feedback is appreciated either way.
[1] Second Rate Captain is a Russian Navy rank equivalent to the Commander.