Ajay's Story: Flight of the Munificent.[1]

Since some time, command has taken a liking to interrupt my reading of Warhammer 40k books. This time was no exception, though it was "Caves of Ice" this time. I was just about to read how the "brave" main protagonist of the book was just about to witness the huge-ass flak-off explosion[2] when Canteen's message appeared.
"Ajay, phone me back. NOW. G.M. Igor "Canteen" Flyagin."
Well,it isn't like I was reading that book for the first time, and messages from Flyagin so far were promising some interesting stuff. I jumped from my bed and got myself into shape, then left my flat - I was on Murmansk by that time - locked it and headed to my ship.

-A wreck seeking? Really, Canteen? - I asked my CO, talking to him via videophone built into my personal console. - To find a Rheinland freighter lost since... two years or so, and find out what happened to it?
-Better than doing nothing, am I right? - Flyagin asked back.
-Right...
-Listen, I was working on something really interesting. Remember that mission on Sretensk?
I nodded, remembering the Lost Paradise missions that followed as well.
-I've almost put the puzzle together, but there are few missing pieces. All you need to do is just find these wrecks and investigate them. The last confirmed contact was from Guangdong, sector F8. Head there.
-Yeah, won't be a problem.

So, there I was, flying through Sovetskaya towards the Gladius gates.
Guangdong was a far away system, separated from the rest of Coalition systems. There was just a small sensor station, lots of patrolling ships and a Rogue base - Achinsk Station. Everybody knew about it, but since 75% of station population were mostly reasonable kind of Rogues, the navy held a "live and let live" policy towards their base.
To get there, I had to fly through Gladius system. Well, I used to fly through the Inner Core on a daily basis, so it's going to be a piece of cake.
Flight from the Sovetskaya gates to Guangdong gates was nothing unusual. A few Nomads, a few friendly patrols, et cetera.
As I reach Guangdong, I set a waypoint to the F8 sector and sent the "Head To" command. "Stranger" confirms with a synthesized female voice.
Often it's the only voice that's keeping me company.
I know that I can open a comms connection to Flyagin who is waiting for me to report when I find the wreck, and I know that he wouldn't mind a small talk. But I don't do it. Mainly because I've gotten used to the loneliness to the point of it becoming a part of my life, an attribute of myself like my glasses. Or like "Stranger".
Soon after I entered an Ironcastle asteroid field, I turned on a filter for the sensor contacts, setting it to "Solar objects". I needed to find the wrecks.
Soon enough, I detected a wreckage. It was showing up as a... Rheinland "Humpback"-class freighter.
I opened up the comms.
-Canteen - I've said in calm tone. - I've found it.

-It's a "Humpback". Its infocard says it is called "Munificent". Assigned to... damnation, corrupted data. Line ends with "Brannigan" though. I'd assume it was assigned to the Rheinland Battleship that is wrecked in Mandar.
-How did it get there, any theories?
-Well... Disordered escape. Possibly, they found a jump hole in Gladius... Yes, they went through the unknown jumphole. Logs also say about a fighter escort going under the name of "Eisenstein". - I said, feeling the irony. - As all systems were down, it did not received any signal of its destruction, but it received no signals at all. My scanners have determined the leftover radiation and particles, they show that the ship was hit by particle weaponry. I'll launch a comparative scans... 99.5% conformity with the 10G42 "Coalition Gatling".
-Yes, yet another proof - my CO replied. - Can you try to find if it's escort ship is nearby?
-On it - I said and launched the cruise engines.
Soon I found it, a Rheinland fighter wreck.
-Ah-ha, here it is. That's where the flight of the Eisenstein ended. - I said.
-Something along the lines of that book?
-Well, I hope not. Last thing I want is to have a ship chock full of plague zombies.
The book in question contained more than just plague zombies, so Flyagin quickly interrupted me.
-I don't think so. Check it's log files.
-Already done. Thankfully, they are less corrupted. So... Yeah, Brannigan's flagship. Came under attack by unknowns - well, Dom'Kavash actually - and escaped. Attacked by Coalition ships in this system. After "Munificent" was down, it activated it's cloaking device.
-Just as I thought...
-Same particle pattern of the impact marks, but that wasn't what doomed the "Eisenstein". It ran out of energy. Pilot activated their escape pod, but I haven't seen it anywhere around.
-The last piece has found its place. Now it's clear to me.
-Are you going to explain or?.. - I asked.
-No. Top secret stuff. My clearance level doesn't allow me to spread this information. It's related to the mission on Sretensk, that is all you need to know
I nod. Well, what I pulled out on Sretensk caused heads to roll, so I can understand why it's kept secret.
-So, what do I have to do now?
-You are free. You can head home. And do not worry. I will tell you everything once it is declassified. But something of your findings will be declassified.
I turned cruise engines on and headed to the Gladius jump hole. 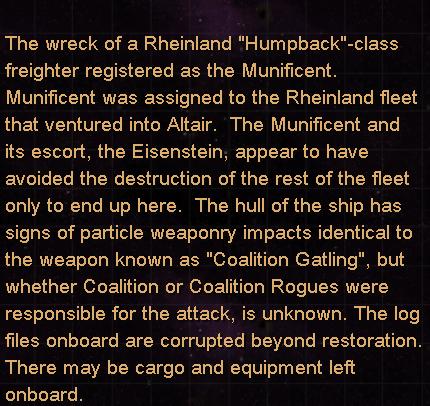 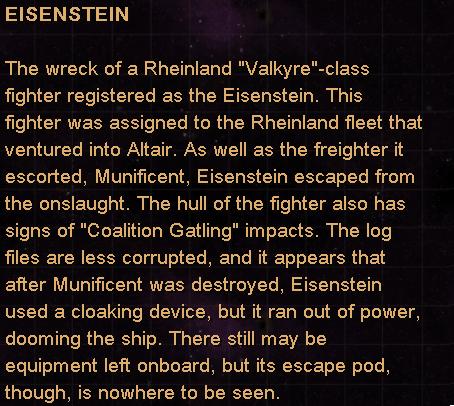 A/N:
Yeah, I feel a bit selfish posting this. Forlon knows why.
Footnotes:
1) Reference to "The Flight of the Eisenstein", WH40k book by James Swallow.
2) "Caves of Ice" is a book from Ciaphas Cain series.
3) The wreckage of Eisenstein is in fact a Banshee-class light fighter, not a Valkyrie-class heavy fighter.