It's amazing how fast time flies when one doesn't keep track of it. Though I can't be blamed for not keeping track of time when I was stuck on DS17 analyzing data from the recon reports and DS17's own intelligence systems.

After the Weth Standoff, the Great Doms went dormant for some time. No doubt planning something. So I had to remain vigilant, even as DS17 grew emptier. I could understand that though. Some had business to do in Sirius or even in the furthest reaches of space. Some had loved ones back home.

Speaking of which, I managed to catch a lot of flak from Mom when she heard what happened during Operation Restoring Health. Yet I can only imagine how much flak Dennzio got from his wives. Which might be the reason why I haven't seen him in a while.

However soon I've heard from another of my friends.

-Hello, Ajay. I see you're still flying around Inner Core - Forlon said through the commlink.

Martind Forlon, founder of TSH and former leader of Silver Arrows, has recently reappeared in this area of space. We knew each other and there were couple of times I had to ask him for help with a few matters.

-That's about only thing I'm fit to do - I replied. - Hello, Forlon. How's Karina doing?

The ginger-haired man on the other side of the commlink raised an eyebrow.

-I've seen blog publications, is all - I quickly explained. - A welcome break from writing reports. I've been stuck here for a while. At this moment, "there's a stalemate at the frontlines".

-I see - Forlon replied. - I've called you because I've had an idea. We are thinking to build another base, this time in Altair sector in Dom'Kavash space.

-Hmm - I harrumphed. - You are aware that Altair Sector is an area of Coalition long term interests?

-Which is why I'm calling you - Forlon noted. - We need somebody to clear this thing up.

-The most i can do is to relay this to my boss - i said. - But I can see why we'd need such a station. It would be nice to have a rest, refuel and repair facility in this area of space. Sure, one can take a nap in the ship while hanging in the open space, but nothing beats having an actual station around you. Besides, it will be handy in case of emergencies, technical or otherwise - I explained. - There's one more thing that adds to our concern - I added with a hushed tone.

-I'm sure you heard... we nearly lost Weth couple of months ago - I said. - We beaten them back, but... I'm not sure how much longer we'll be able to hold them back. The base in Altair outer reaches might come handy should we face the worst outcome. Or at least delay the same fate befalling us.

-Not yet - I reassured. - But I'm playing the role of a half-assed tactical advisor here. I have to expect the worst. So... you've got any ideas?

An image of a planet appeared on the side of the commlink.

-A candidate to colonization by Coalition once our security level goes above Orange - I said. These times Coalition has been at either Orange or Red security condition. - Nice taste. It's a beautiful place to build a Bar & Grill.

-I've set up a poll with other pilots to choose the location, but so far this one looks like a clear winner. We need more intel on this place.

-Gotcha - I said. - I'll head there and make a fresh set of scans of this planet as soon as I'll be able to. This will be my personal initiative so it might take some time. I'll send the scan results to the Libra Tower's data server as well as send the copy to my boss, so be on a lookout.

-Same for you. Say hello to Karina for me. Good luck - I said as commlink shut down.

"As soon as I'll be able to" turned out to be next day, as that day I had to take a short recon trip through Sadurn and Pyrrdra (and destruction of a Sentinel battleship while I was at it).

The flight to Planet Patras was uneventful. I parked Stranger inside the planet's ring and shut down the HUD.

-Dear stars isn't it beautiful... - I whispered as I stared from the cockpit. 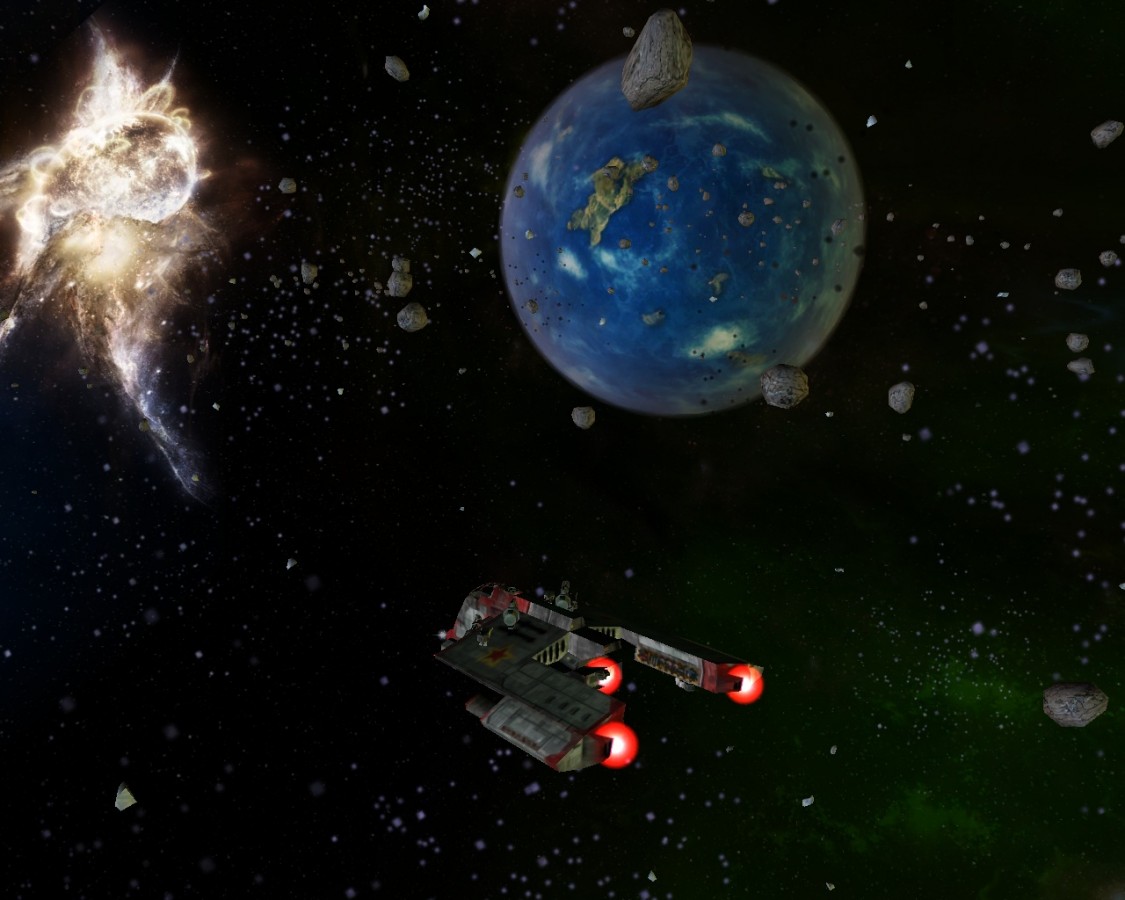 I engaged the voice control center.

Here, 11 hours of staying adrift in that ring. But hey, it's a beautiful place. I think putting base into there would be sweet. Would totally drop by for a round of soda and maybe even a nap.

I've seen you still don't have a name for this station. I'm thinking about "Enskaya Station" for some reason.