WARNING: Once again, by the time we'll be done with this Intermission our equipment loadout will go deep into overkill territory. 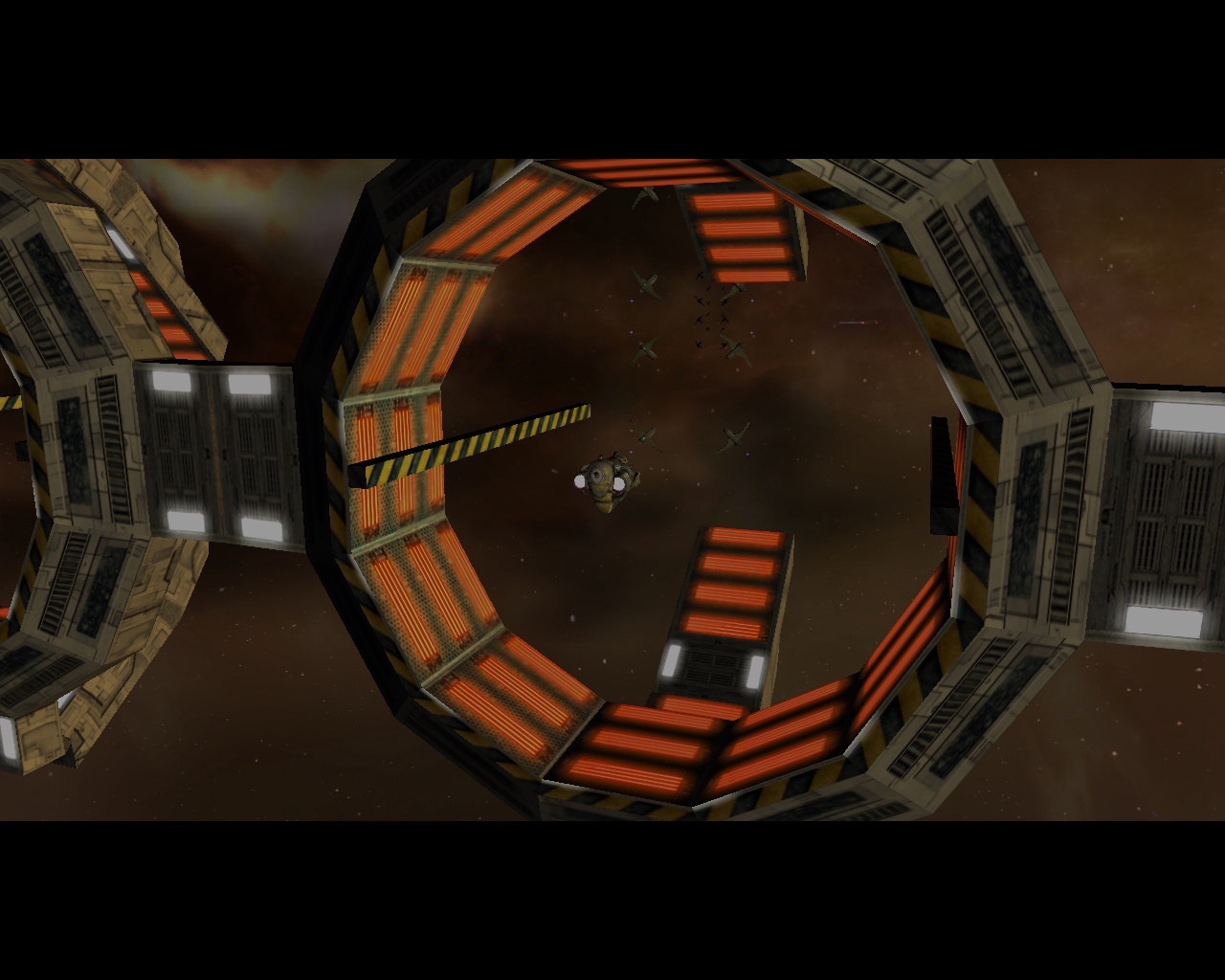 Okay. So. We've got free reign over most of Sirius sector. Let's get back to trying to get the killiest set of equipment. 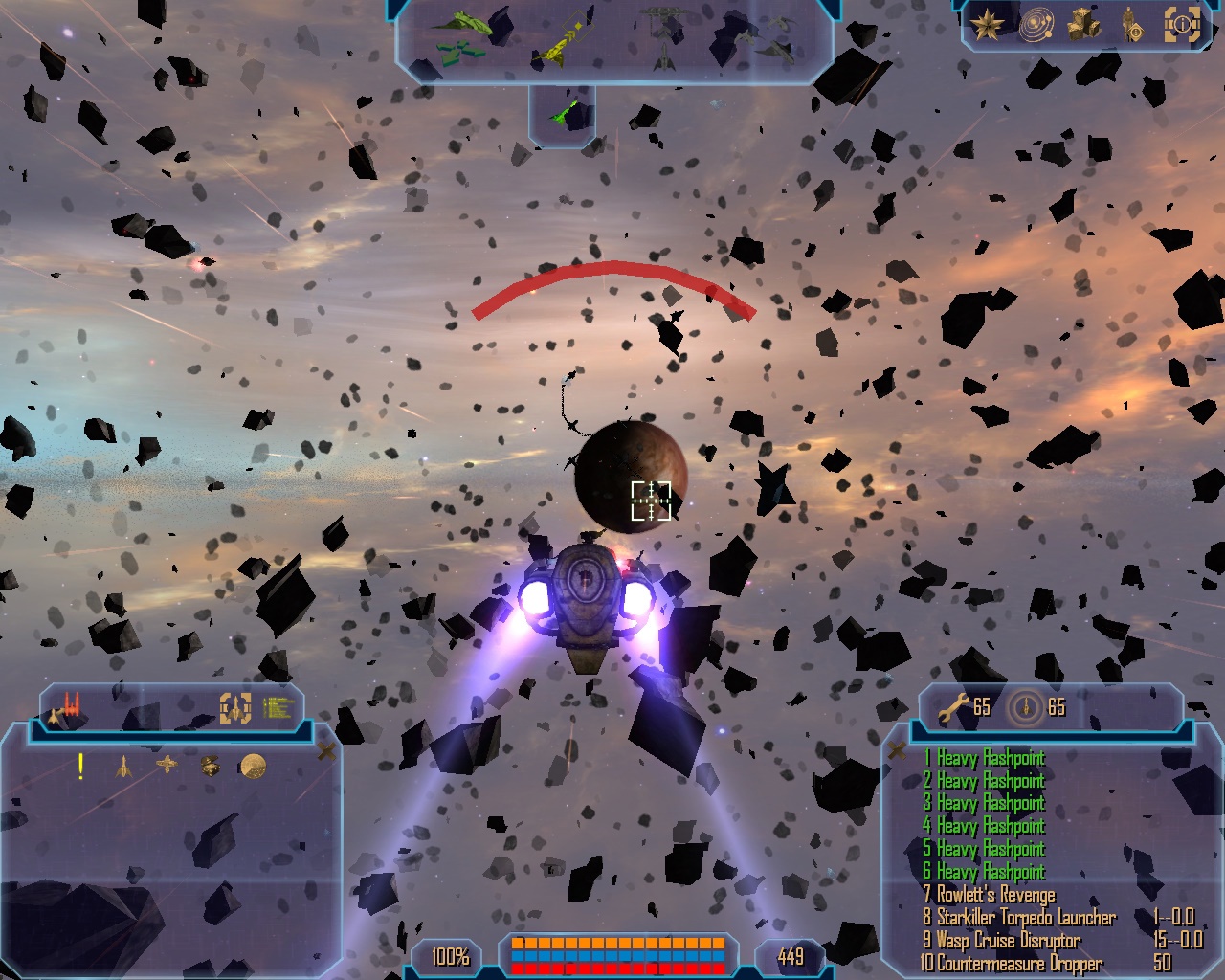 First order of business is getting a new ship. I opted for Seahorse on Planet Harris in Tau-31 (Leeds->Stokes Smelter->Tau-31 jump hole, there fly to Harris right after the jump gate). This will fix our Bounty Hunter reputation. You can ignore this step and deal with Bounty Hunters being hostile if you want. 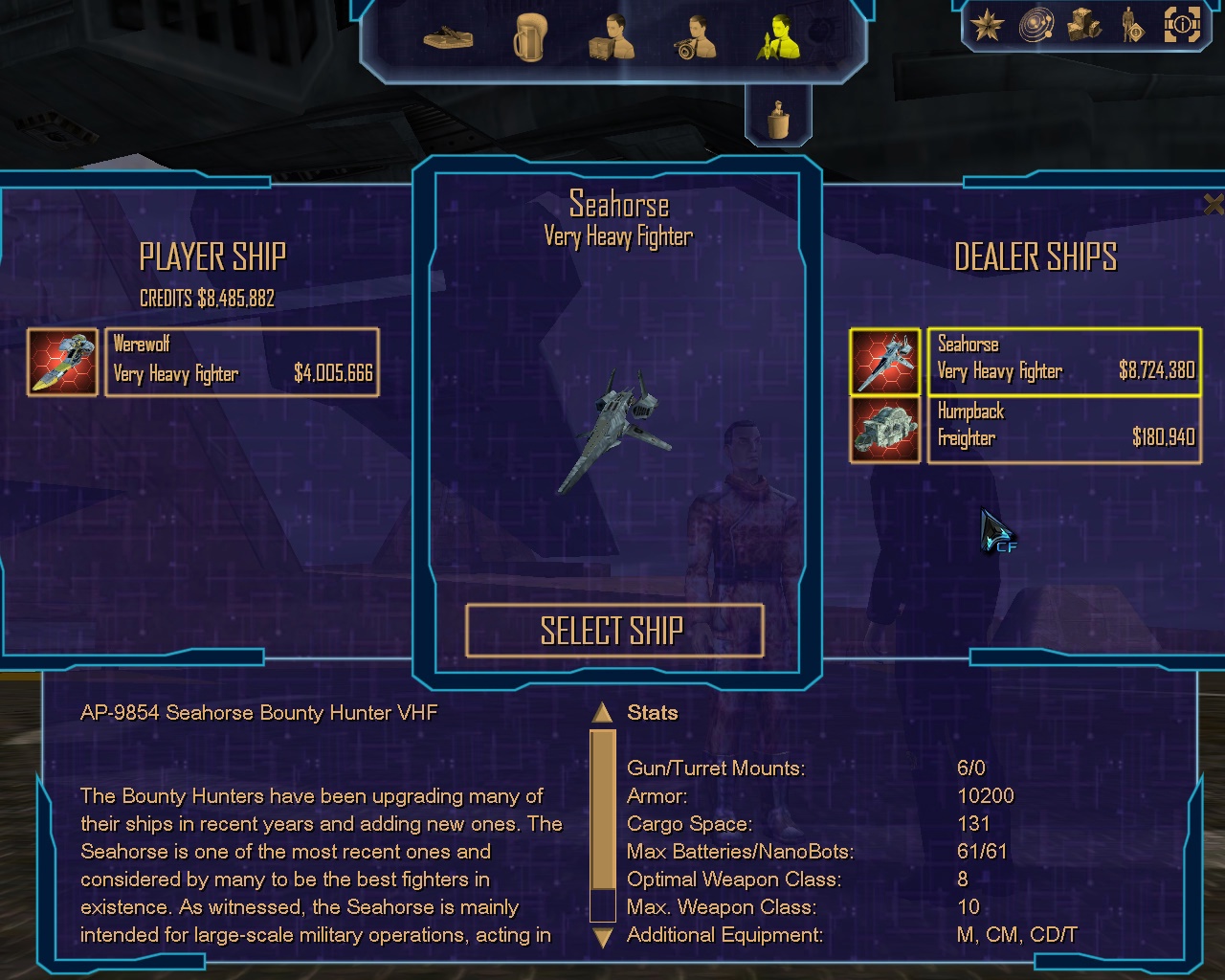 I did some missions in Kyushu. I recommend doing missions against Blood Dragons. Yes, their Dragons have a tricky hitbox, but they drop Lieutenant Escape Pods which cost 100K credits each.

Once the cargo bay is full, let's find a prison to drop them off. It's located in Shikoku. There is a shortcut, a Shikoku Jump Hole in Kyushu. Let's find it.

I know it's just south of New Tokyo Jump Gate, inside that dust field. Patrol Path map is, once again, your friend here. 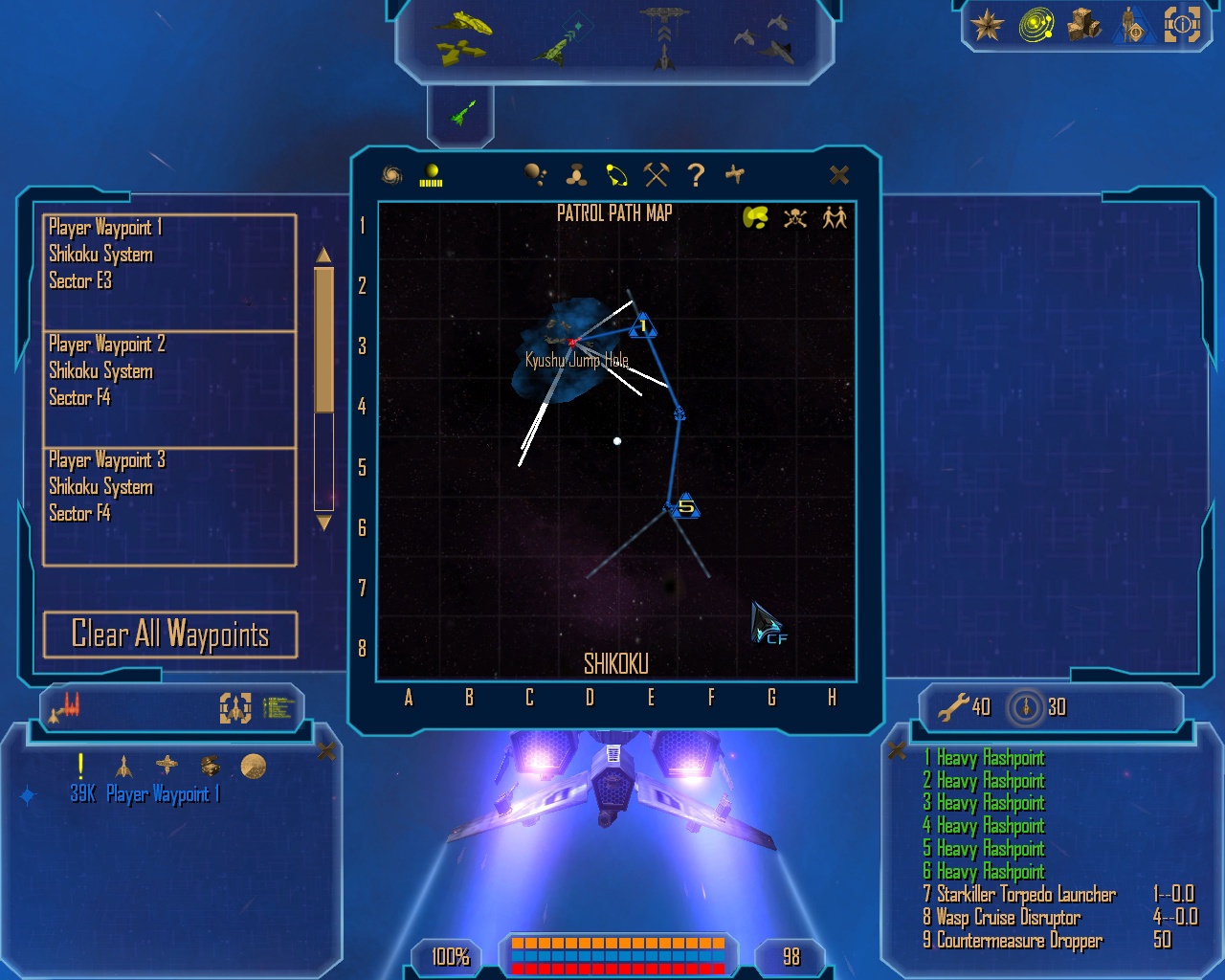 You can get outside the cloud by using a best path command on the point somewhere near TL exits. That will plot a course to a nearest Trade lane ring. 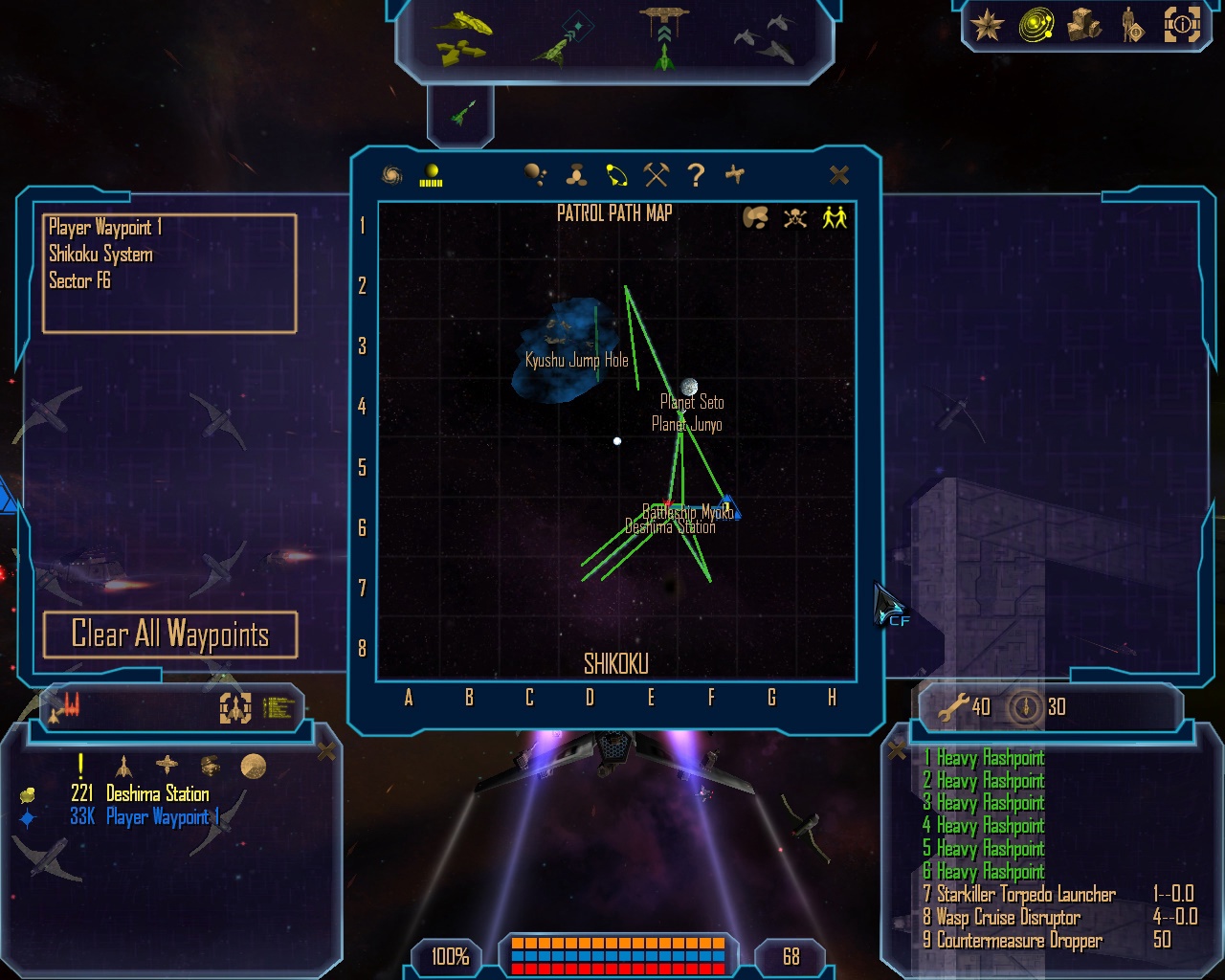 Again, Fuchu Prison is not anywhere near trade lanes. I know it's in the eastern part of the system. Again, let's ask help from the Patrol Path map! 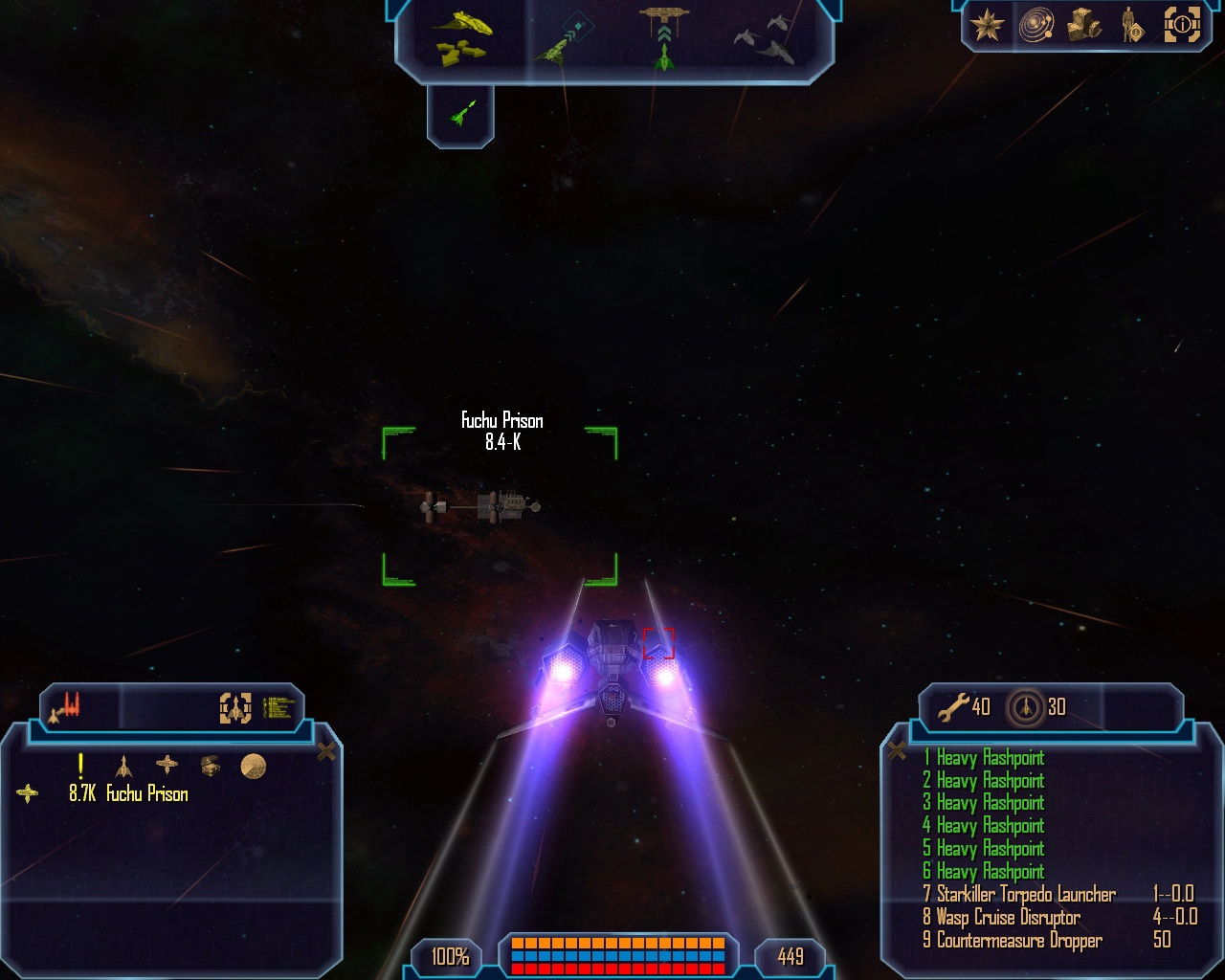 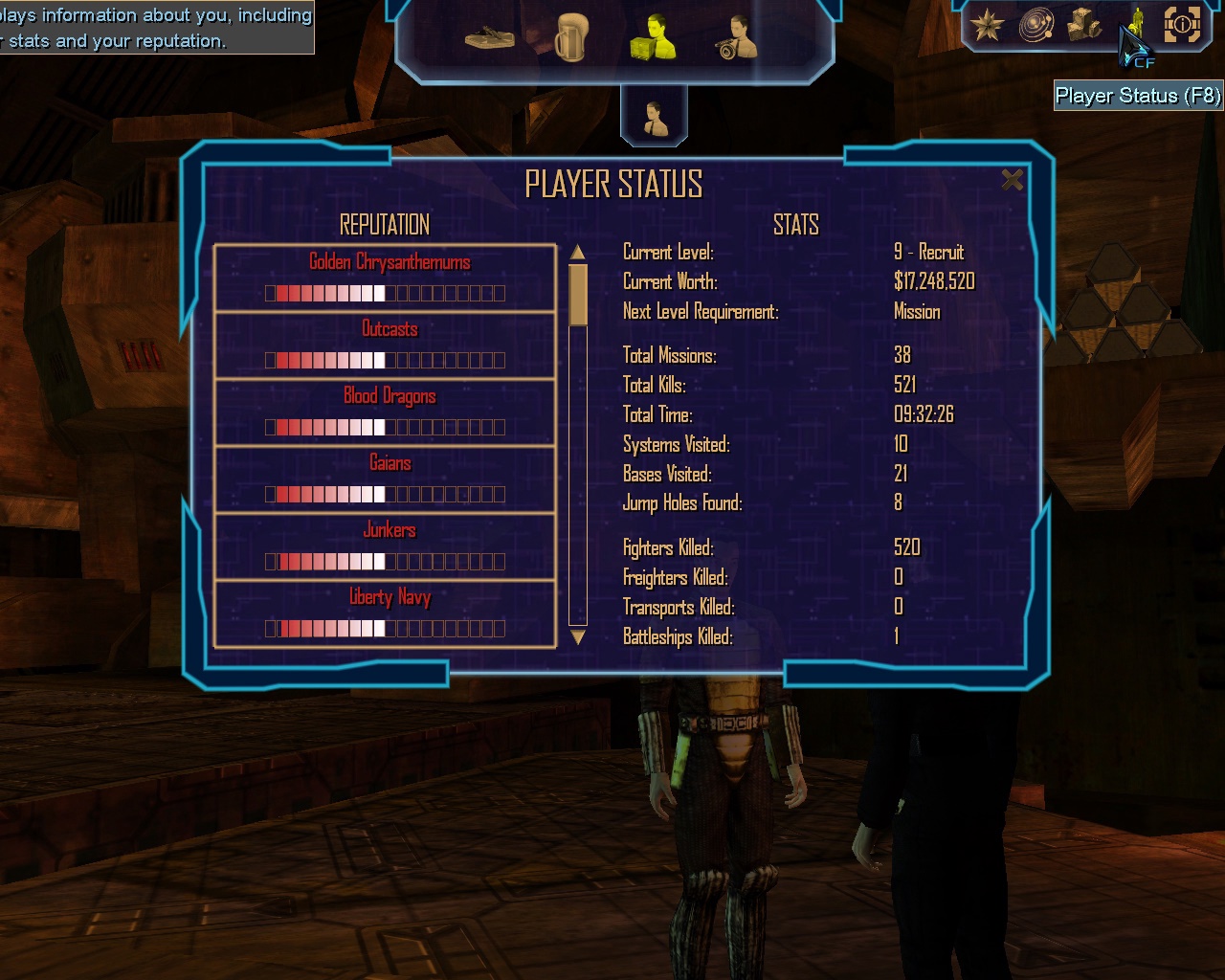 Now that we have money, Juni calls.

Juni: Trent, this is Juni. I finally found the lead that might help us find Professor Quintane. Meet me on Cambridge. I'll be waiting for you in the bar. 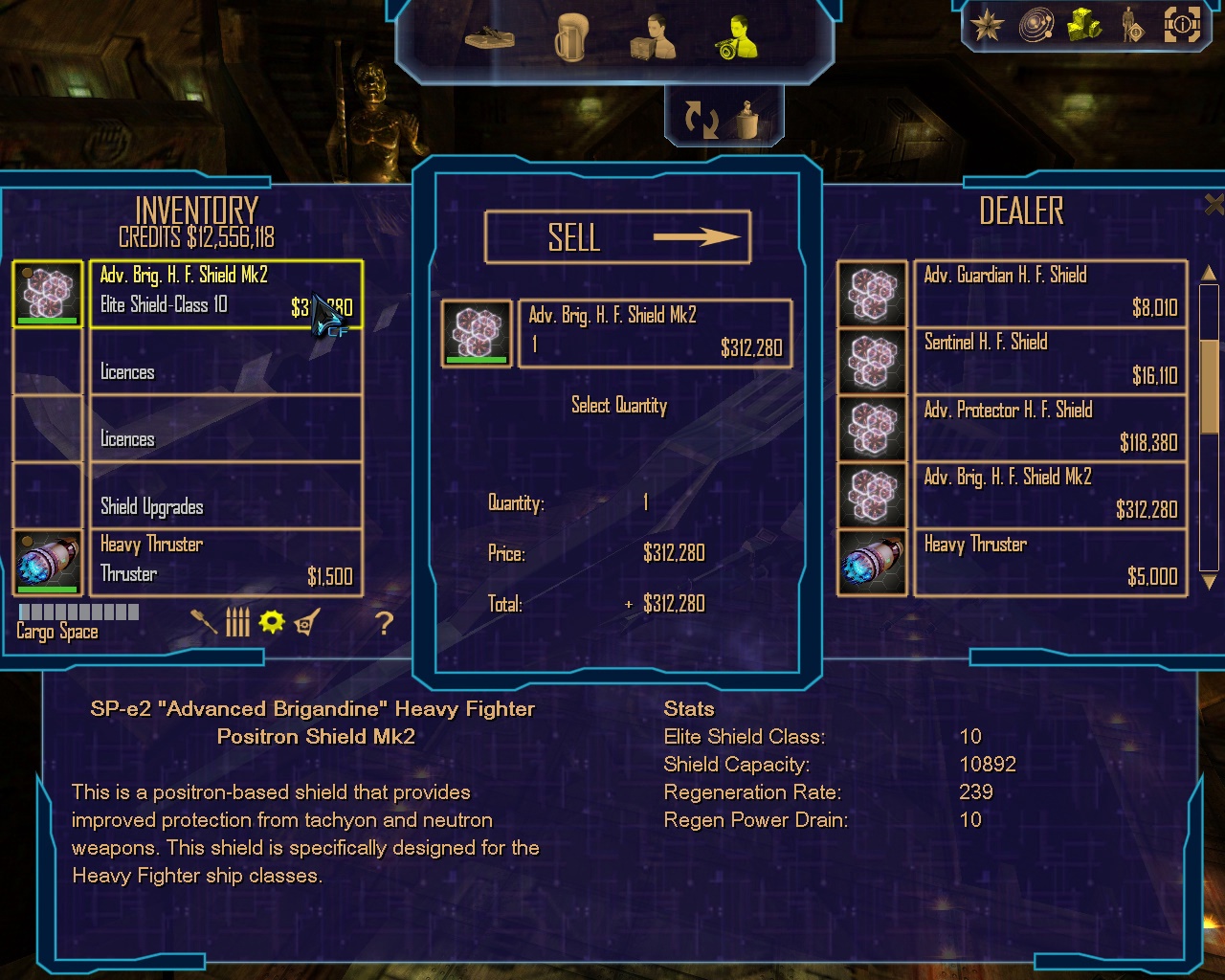 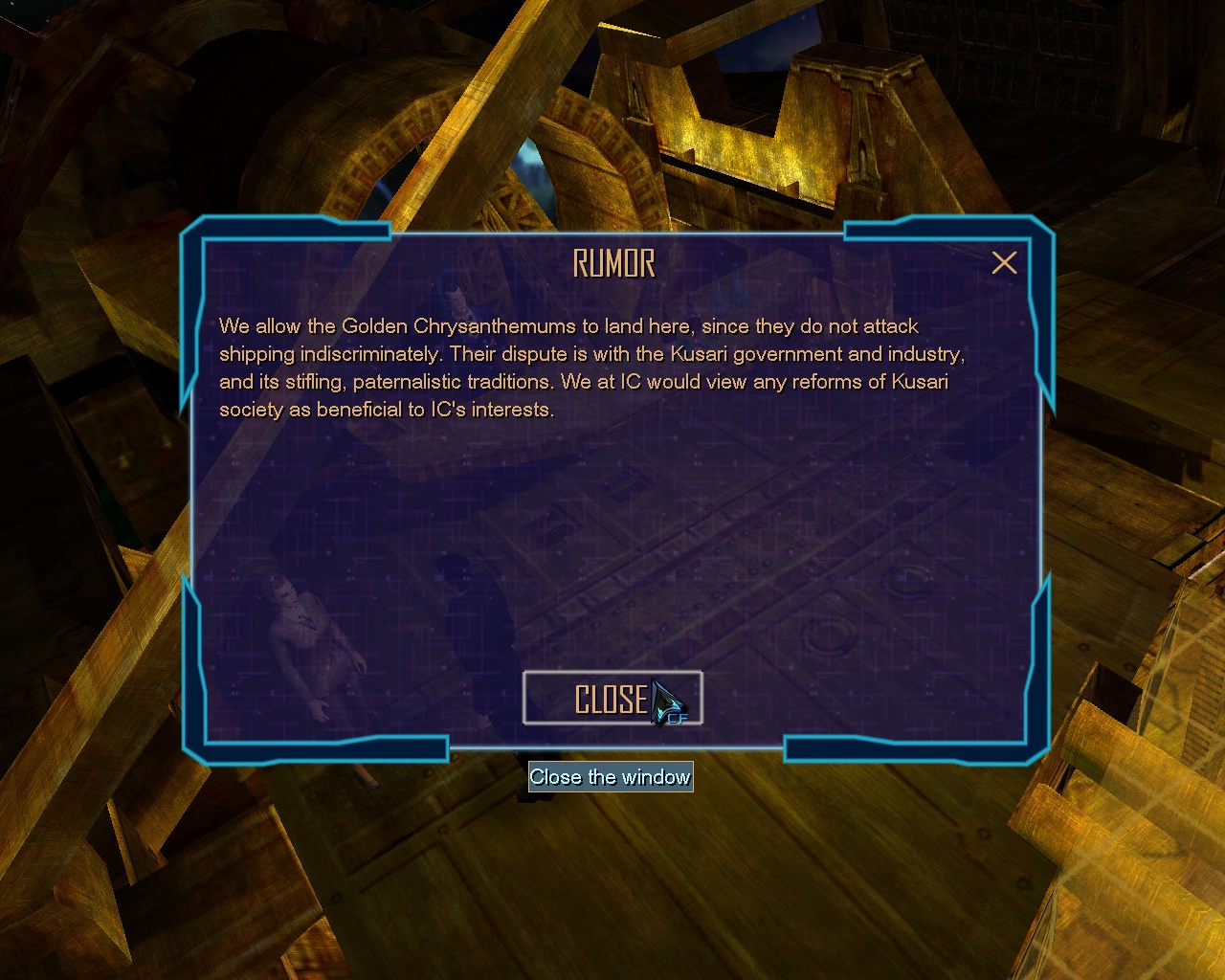 Also, ever wondered why Golden Chrysantemum ships pop up near New Tokyo every now and then? Interspace allows GC to land on Roppongi. That's why. 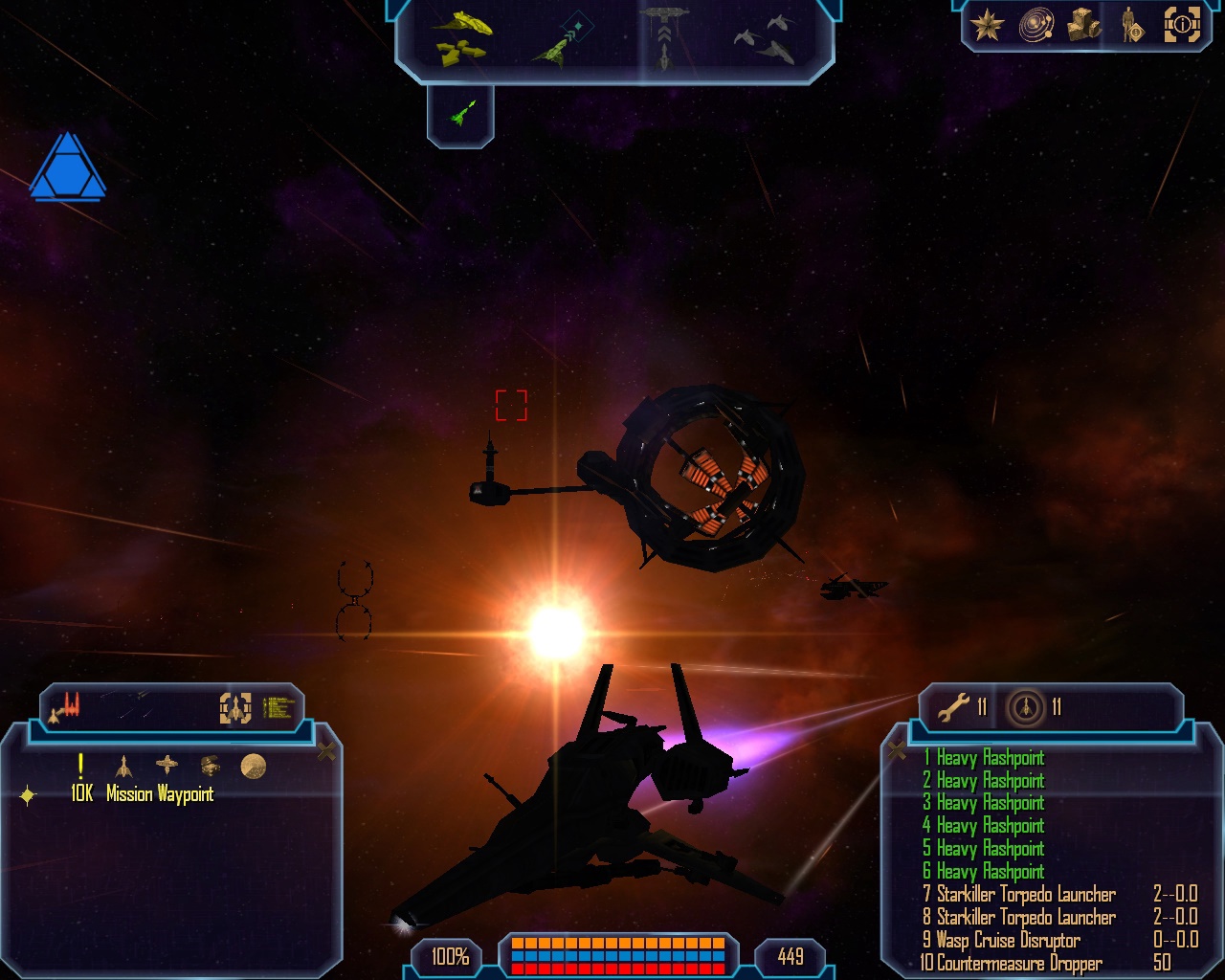 Take more missions against Blood Dragons if you want (recommended: my plan requires 15 million credits to be spent in Rheinland) and go to Sigma 13 through Honshu. I'm going to just settle on having 13 millions and a flak ton of Lieutenant pods. For future reference, missions in Hokkaido pay more. 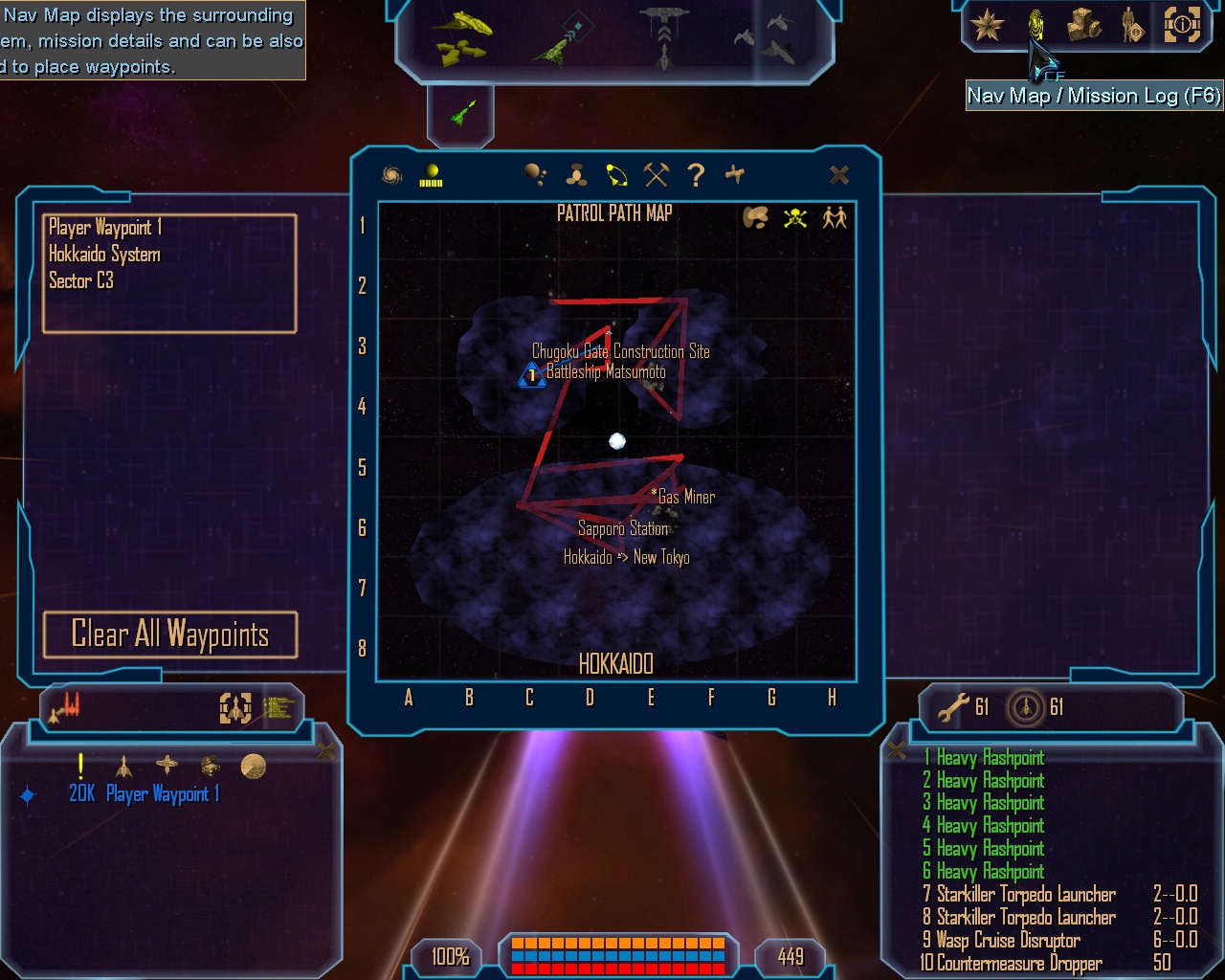 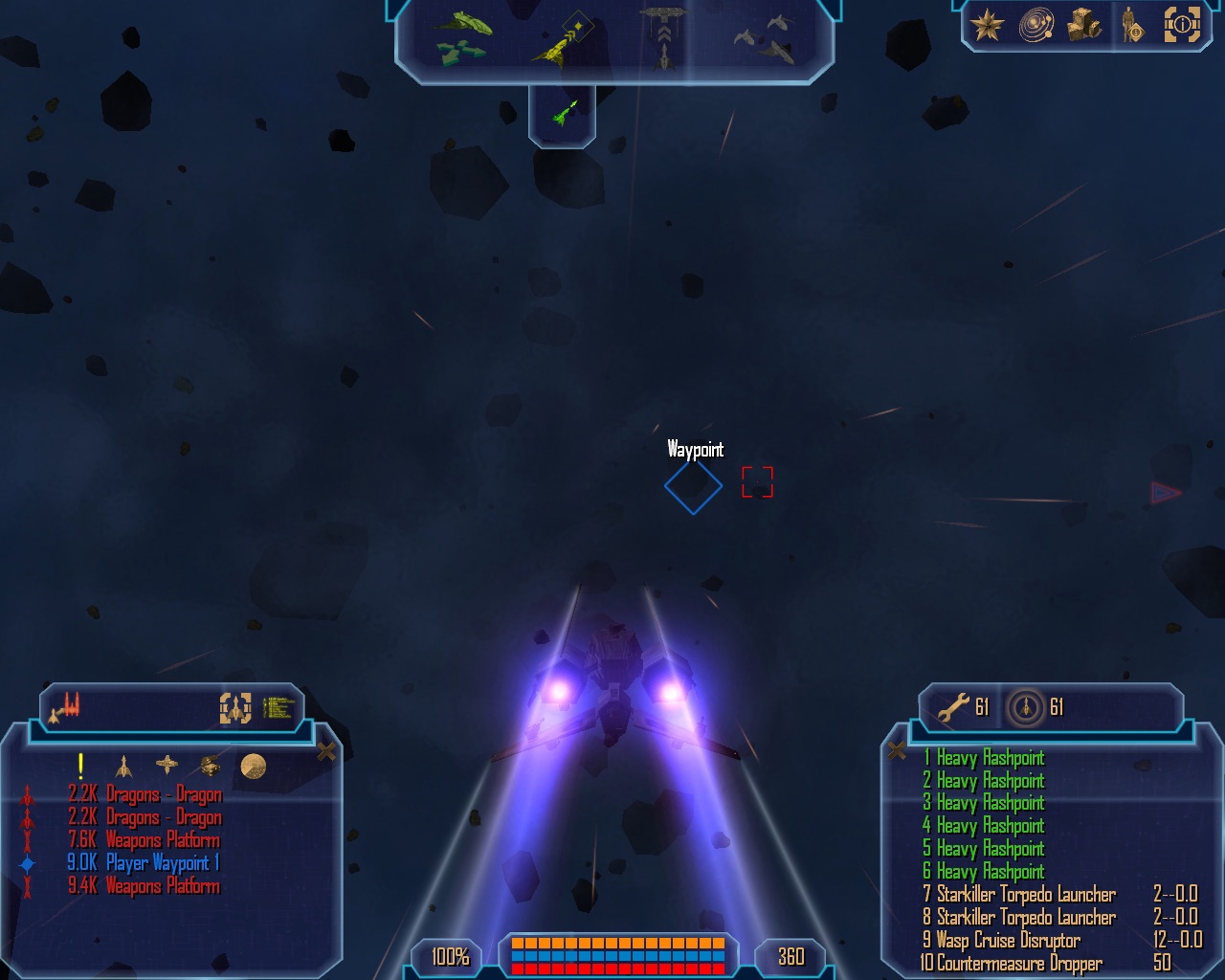 Chugoku is literally infested with Blood Dragons. So it can also provide us with a financial boost at the next prison we land, which is going to be Vierlande. 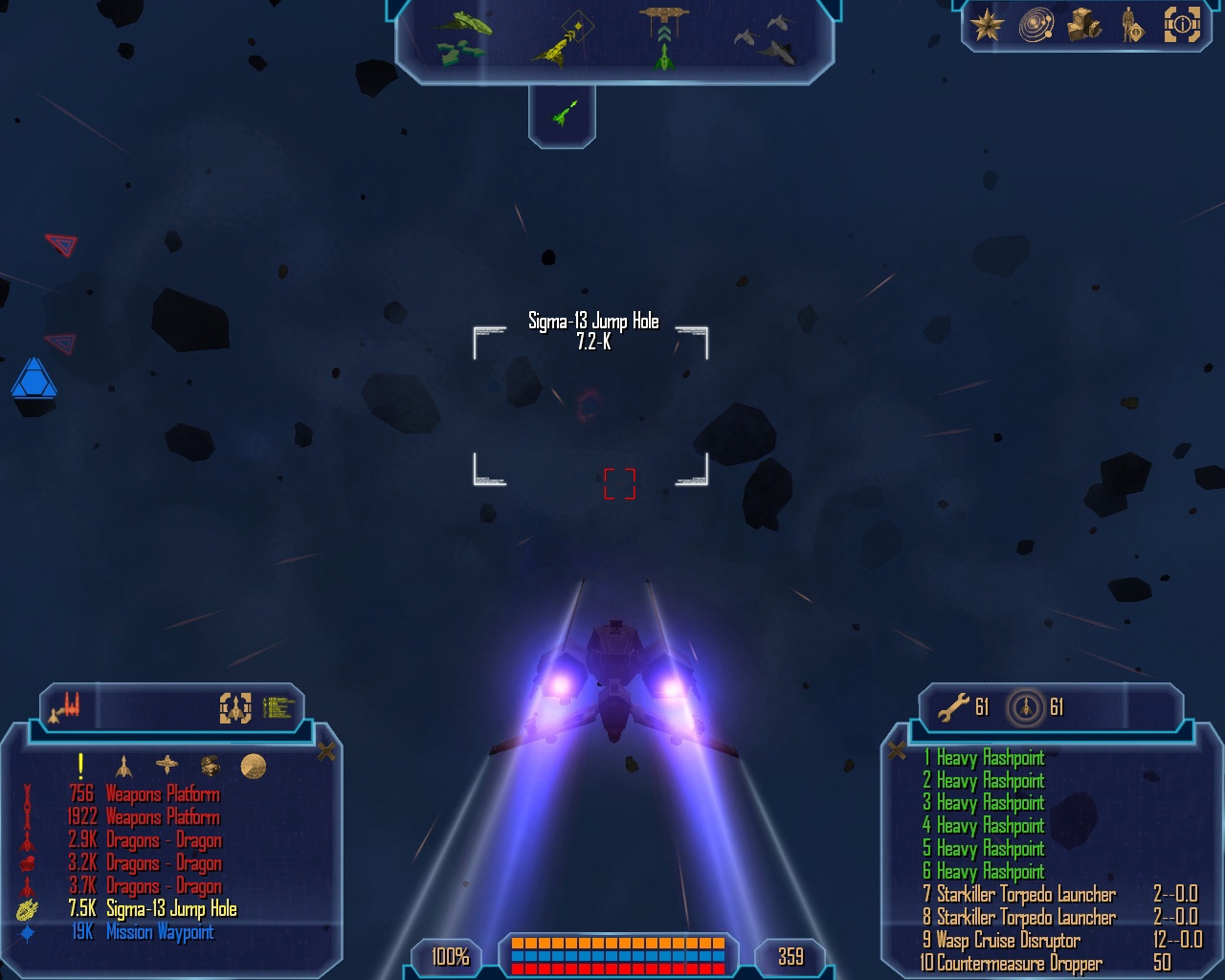 In Sigma 13, search the area to the west of Helgoland Station. Of interest are Rheinland Imperial fighter wrecks. 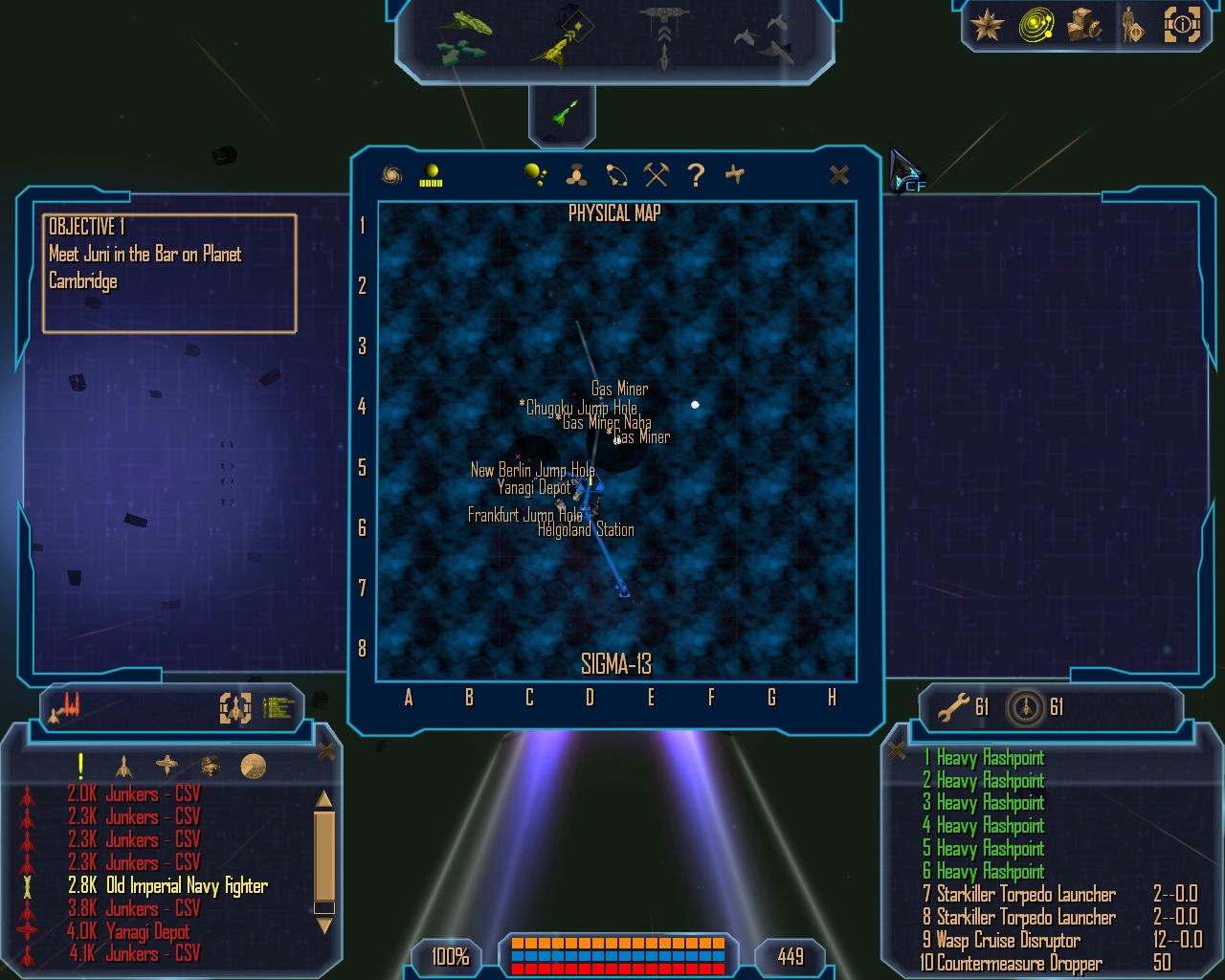 These three are enough. There is another group to the north. I'm going to locate them for the sake of interest. 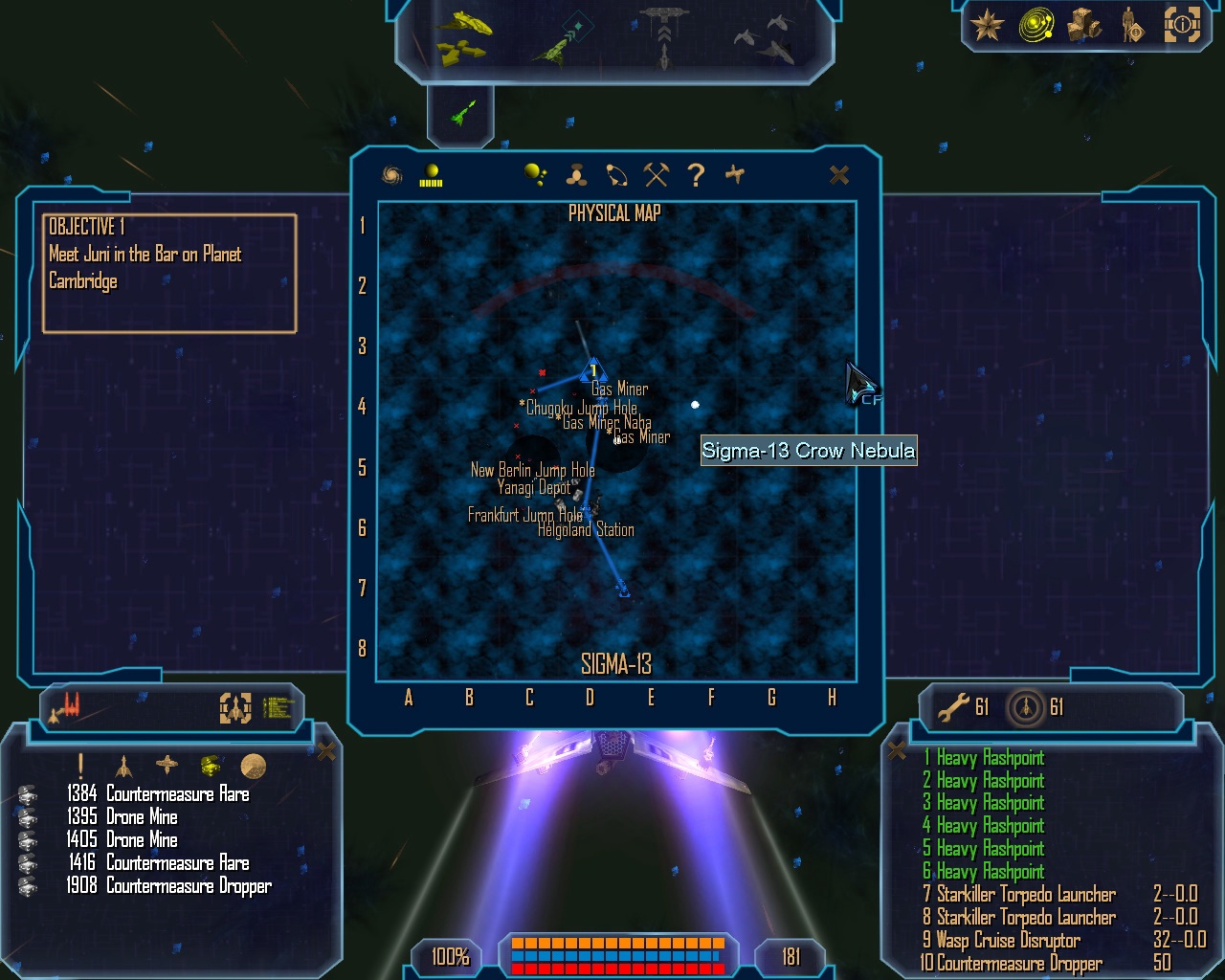 These wrecks drop secret weapons. They are referred to as CODENAMES. Let's settle on two DIAMONDBACKs and two ONYXes. the Codenames have high drain, low rate of fire and relatively short range, but deal devastating damage. 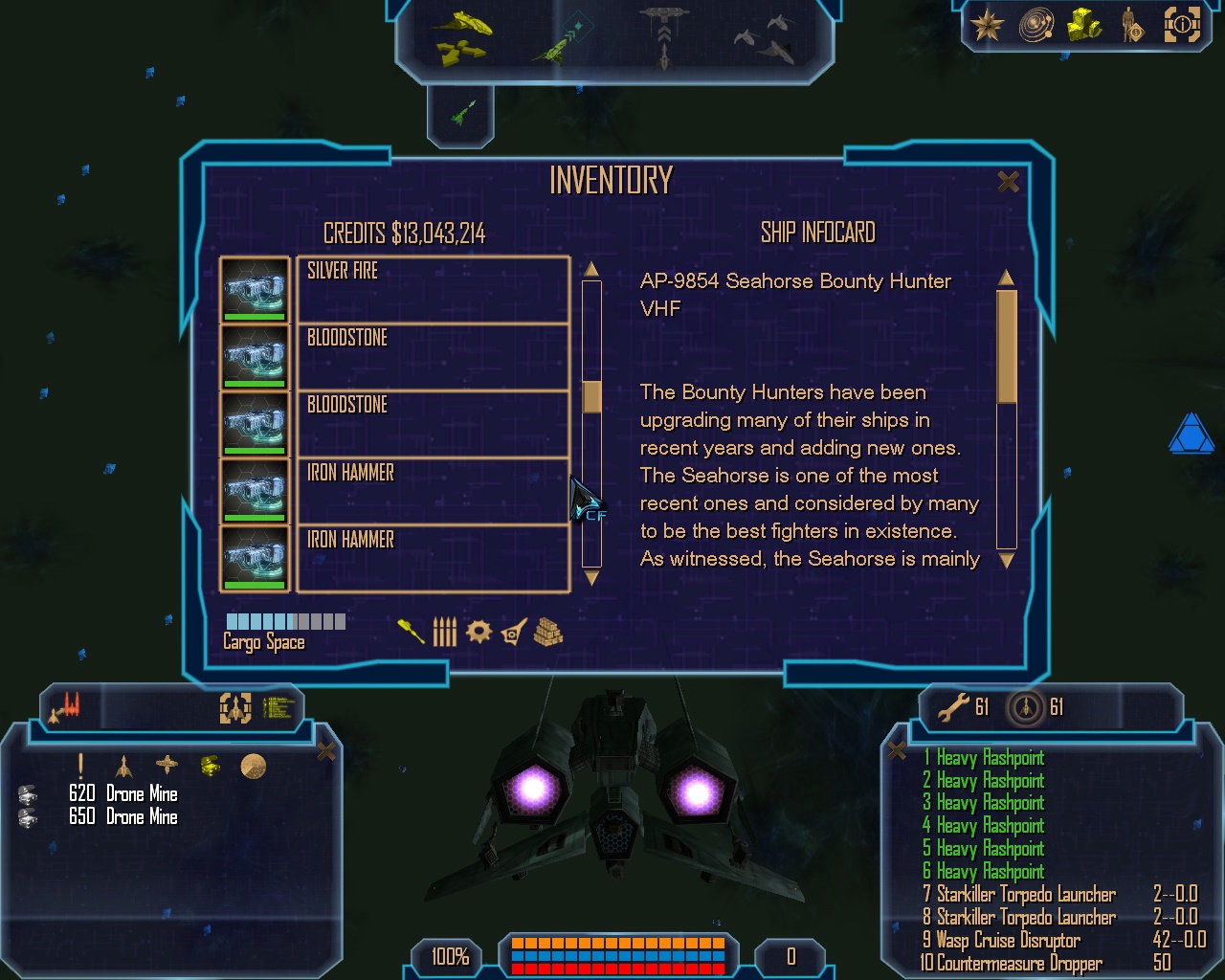 We could have obtained some way back during Intermission 3. I saw Oasis jump hole appear. But I think Oasis wasn't discovered back then, so spoilers.

If you don't like CODENAMES, you could try using Skyblast Bs.

You know what? That's what we'll go for in this playthrough. We'll go full Skyblast Bs. I have already gone with CODENAMES two times, let's try something else for a change. Again thank mr. Palestro1994 for that. We'll keep the CODENAMES in our cargo bay for now, though.

Moving on, moving on. Next stop, Mainz Storage Facility in Frankfurt System. 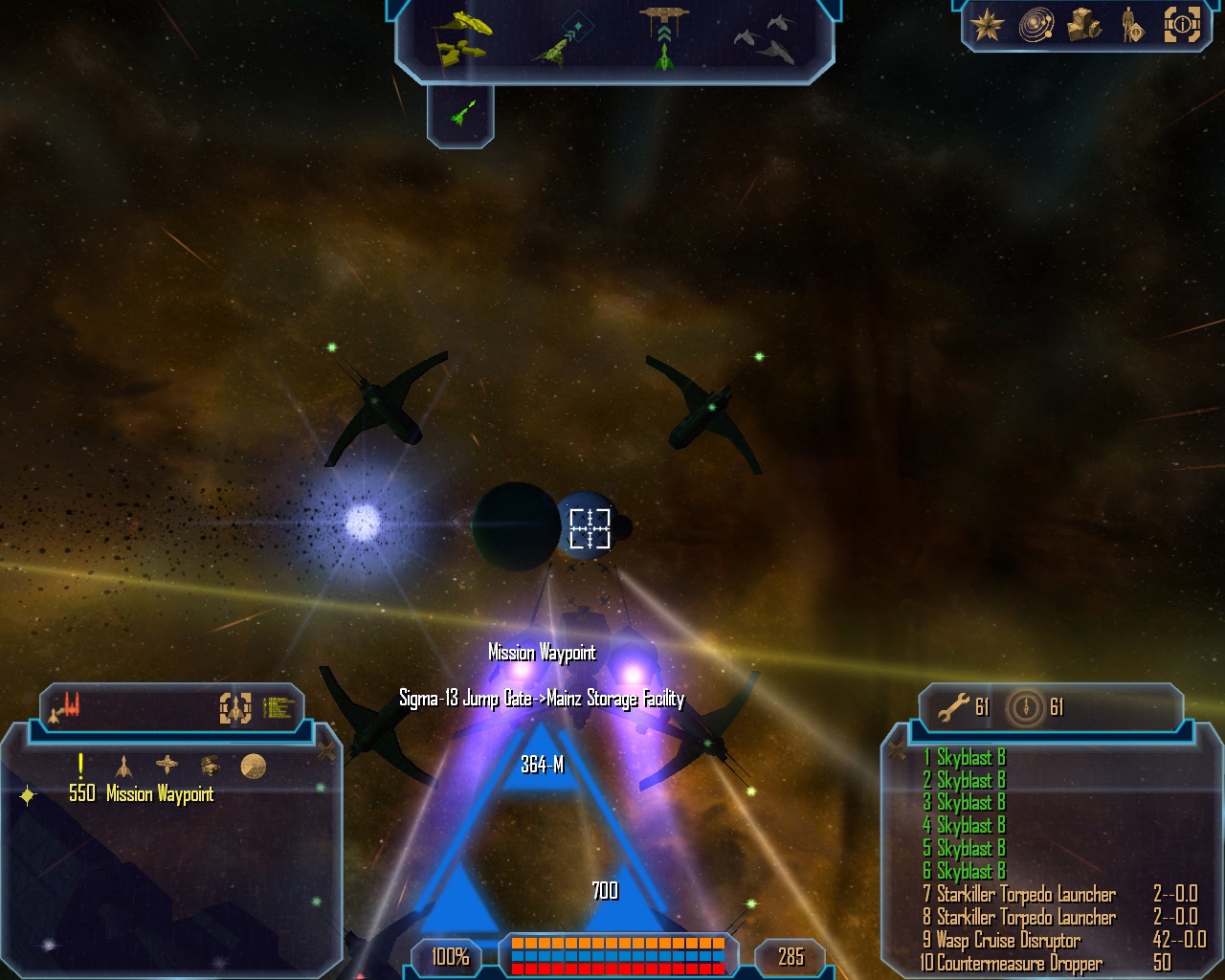 We're here for Power Generator MkV. Yes, it costs a lot, but we have enough money so why the flak not? 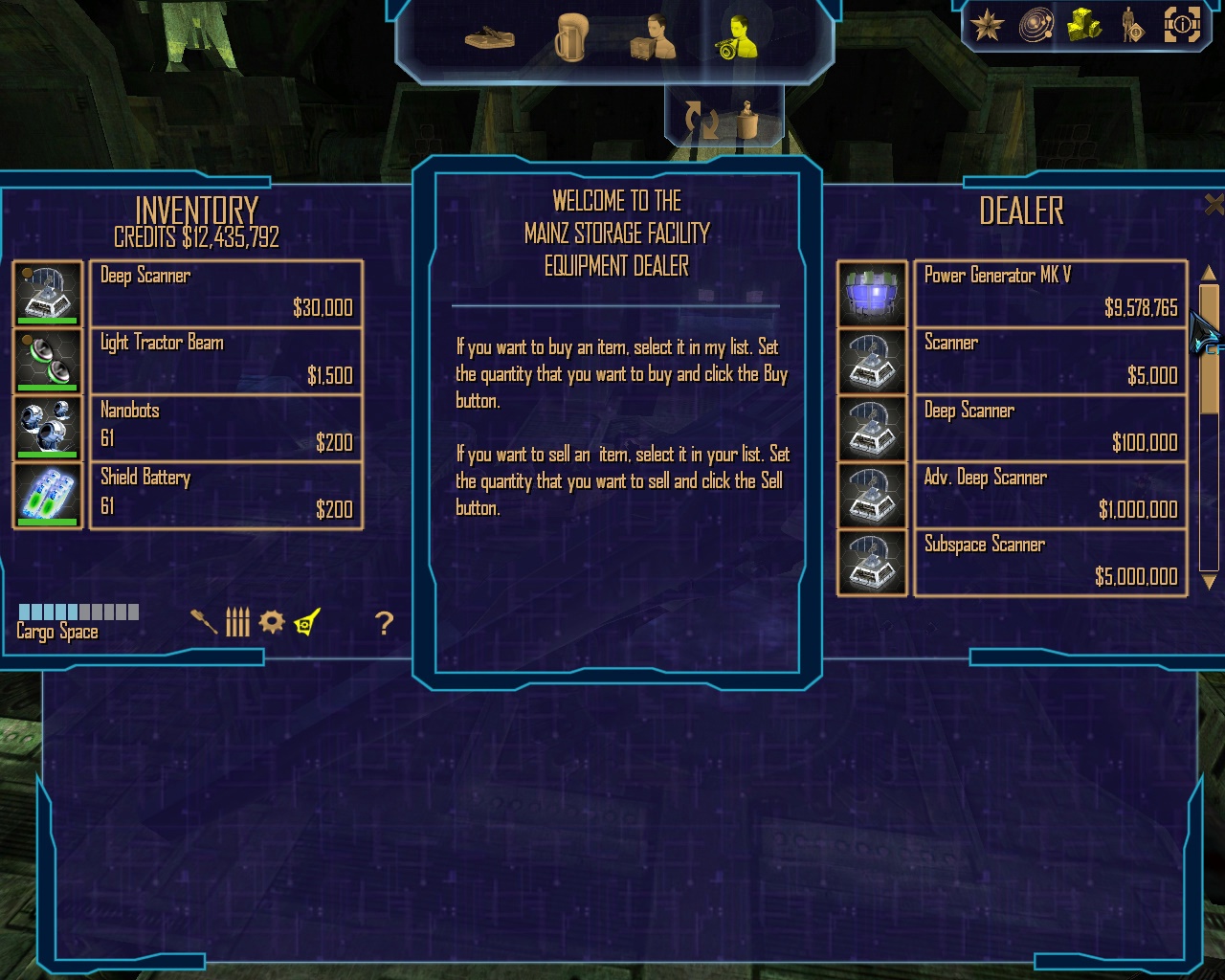 There's one thing to note, though. As I said, my plan requires 15 million credits to be spent in Rheinland. I have 12. Which means I have to drop off pods at a nearest prison. The nearest prison is in Hamburg. There's a jumphole to Hamburg just near Mainz. 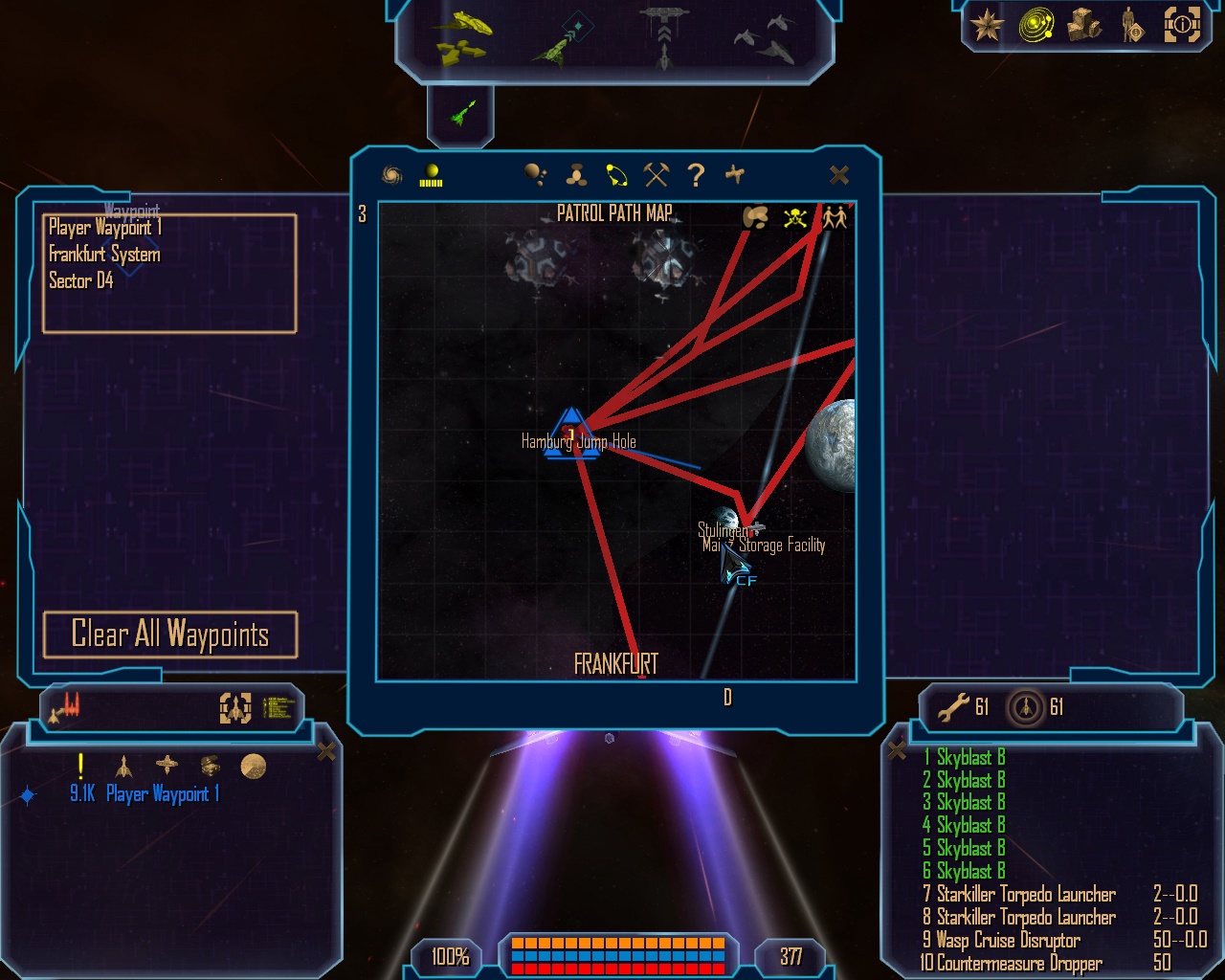 As usual, Patrol Path Map is our friend here. 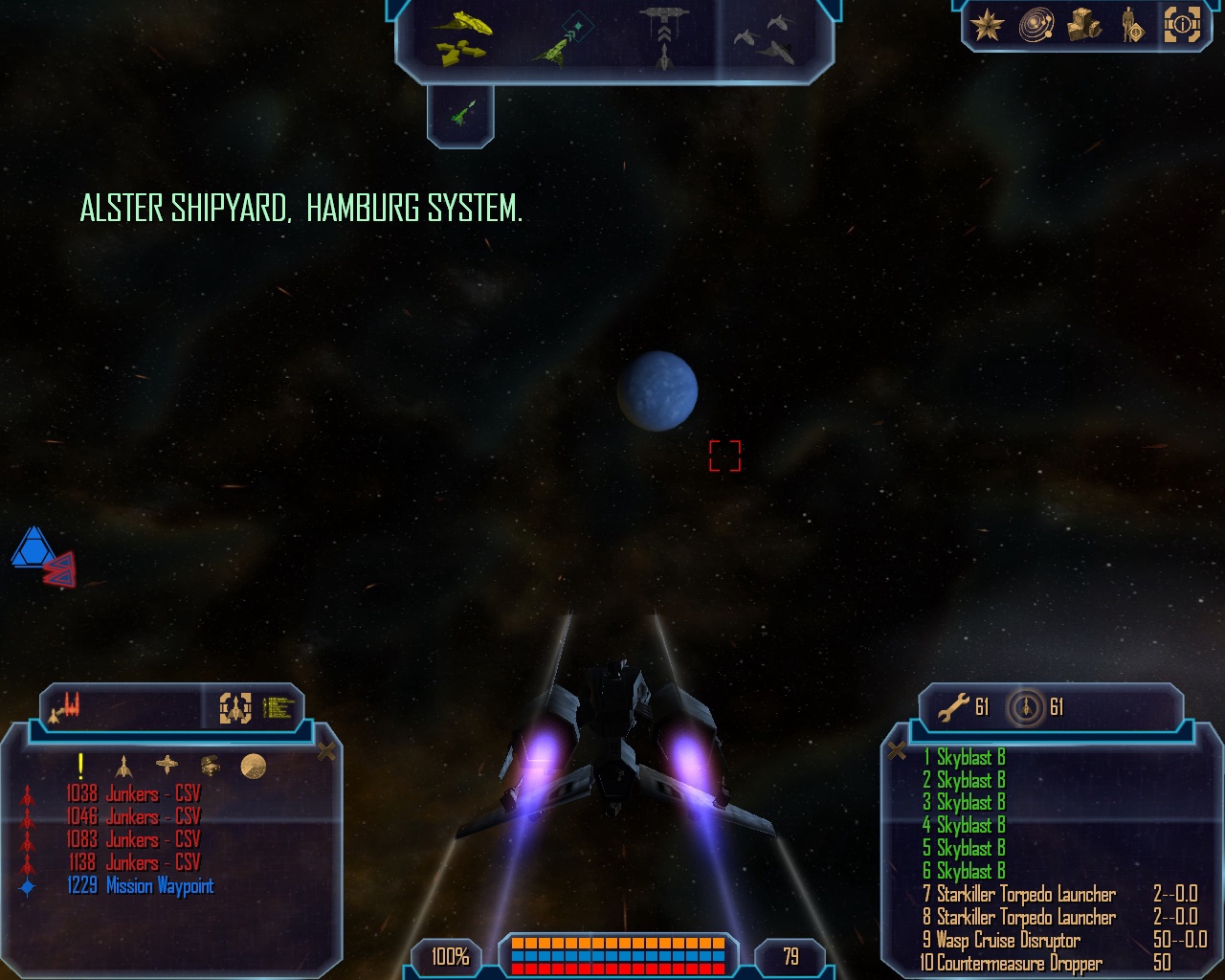 In Hamburg, we need Vierlande Prison. It's near that blue gas giant off in the distance. 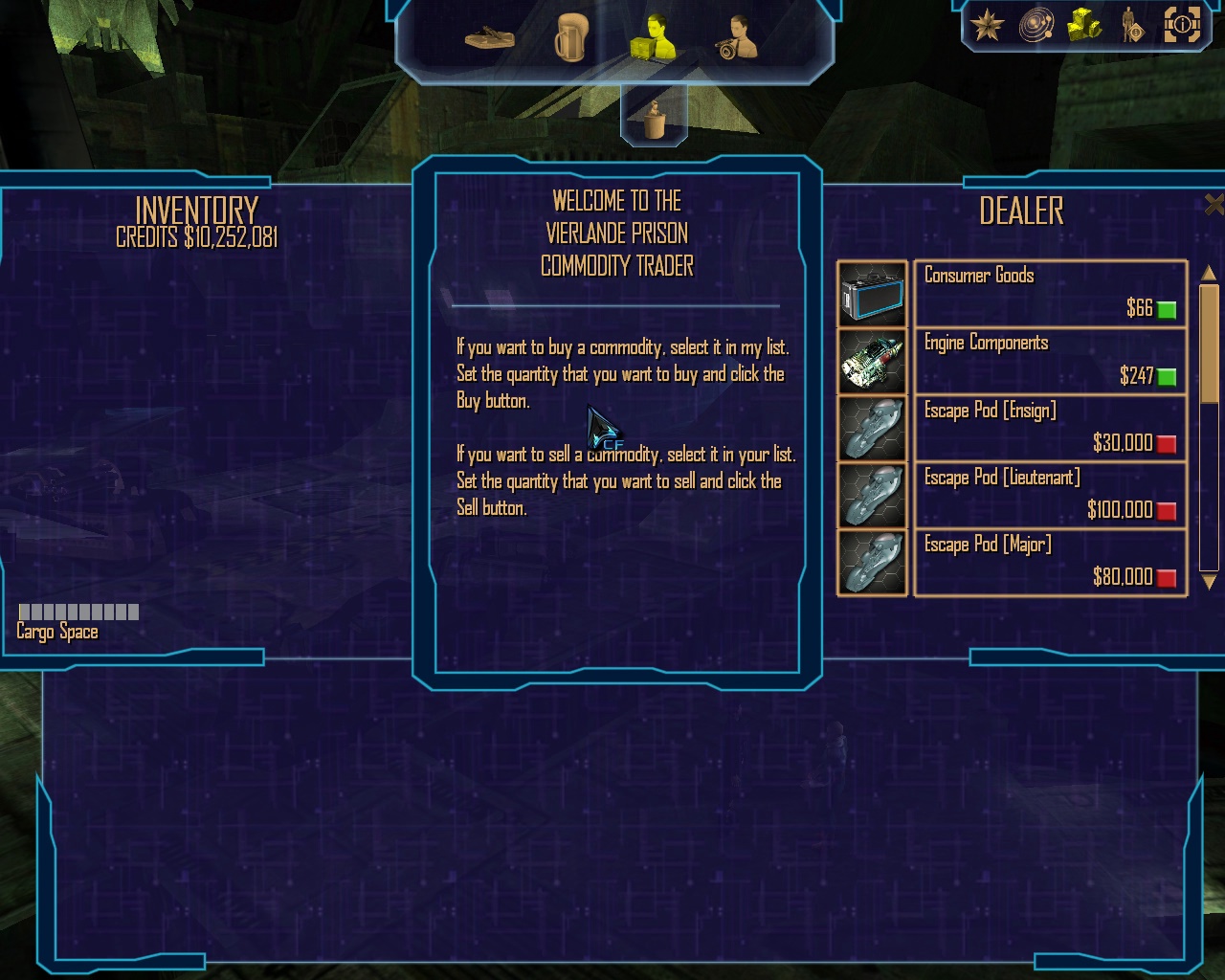 Now we have 10 million credits. The next item in our shopping list is on New Berlin. But you can absolutely skip this part. 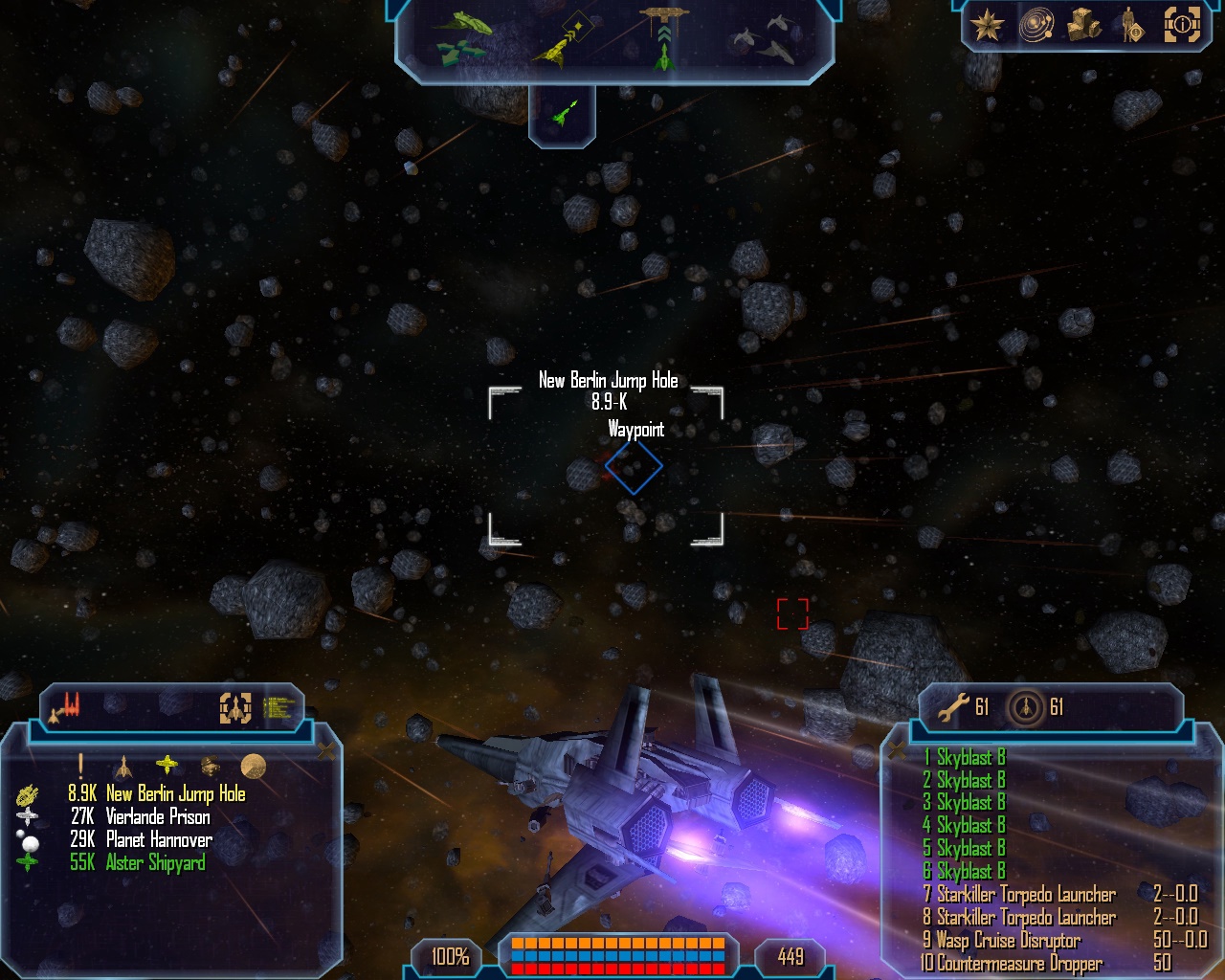 It exits in Ruhrfeld in New Berlin, so watch out for enemies and radiation pockets. There's also a Junkers' base nearby, so you can look for it if you want. Anyway, head to Planet New Berlin. It's in the eastern corner of the Trade lane "diamond" 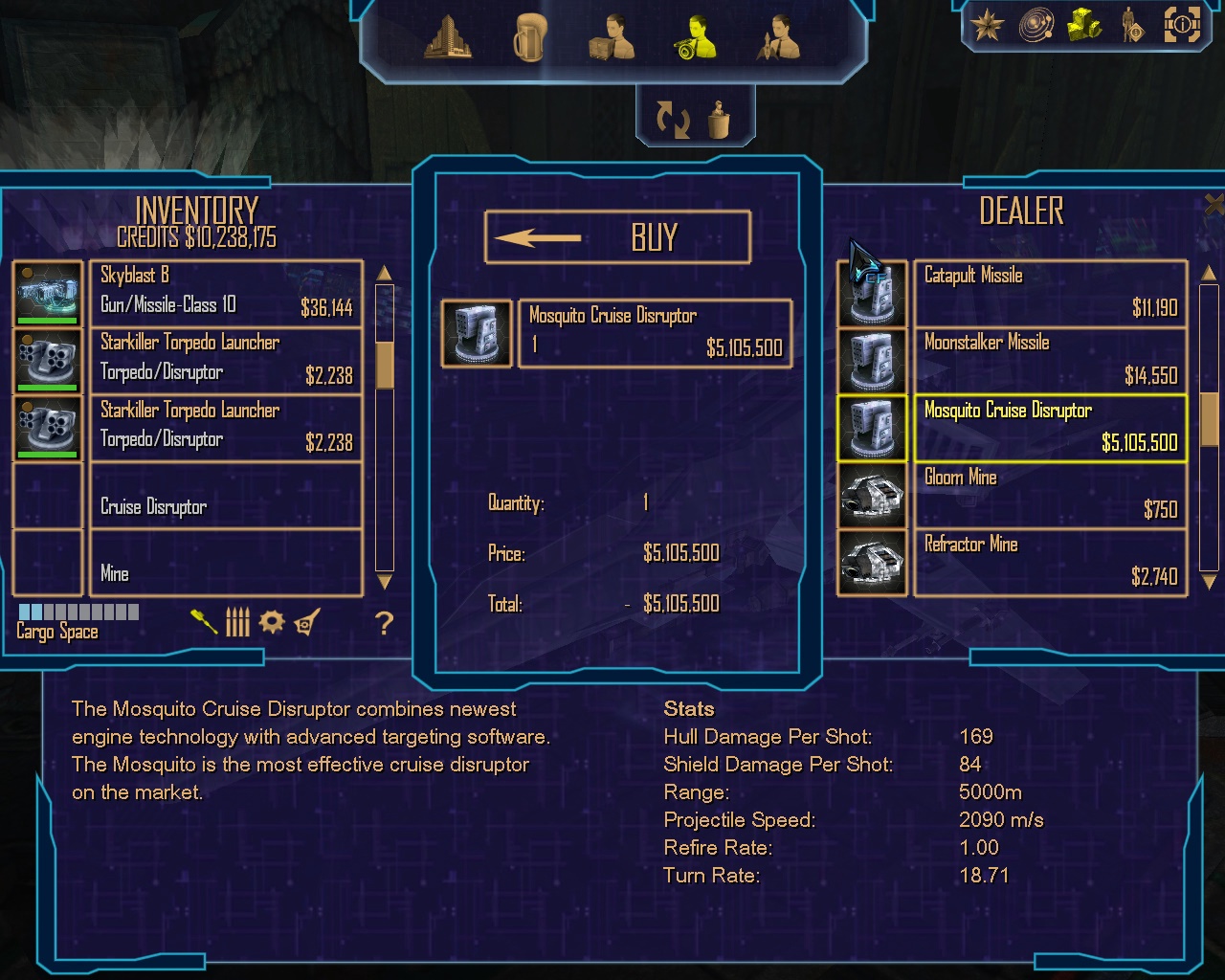 I think I can count the amount of times I used a cruise disruptor in SP by the fingers on one hand. So you can skip this step with an absolutely clear conscience and spend that money on something better, like Adv. Subspace Scanner. I'm going to just buy the Mosquito Cruise Disruptor and Heavy Tractor Beam. 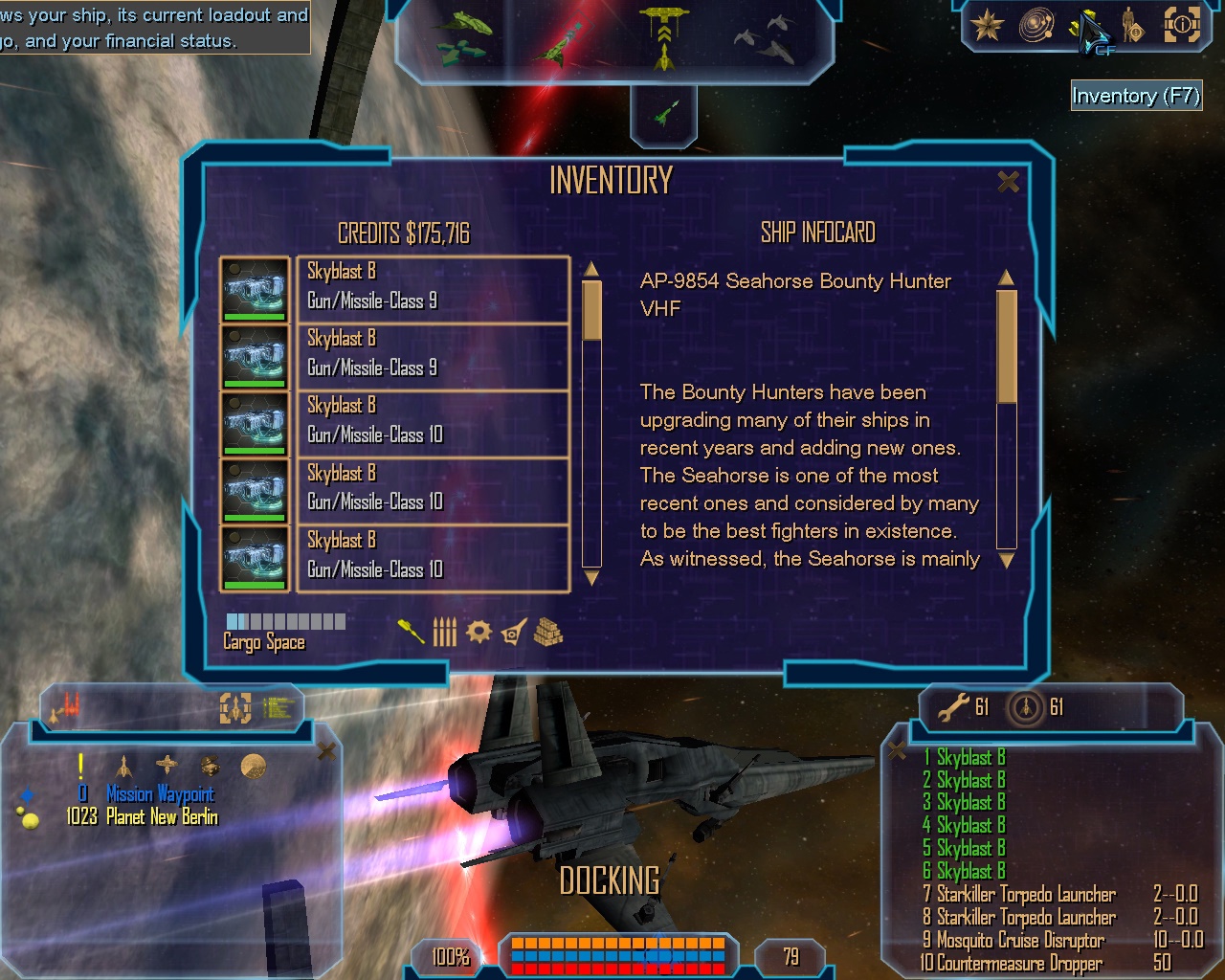 And, I have just a bit more money than I started with. Yet, we're once again within the Overkill Territory. So I guess we're good to go.

Since Juni called quite a while ago, we always have the waypoints set to where our new mission will start, so let's head there. You can take a detour and explore or raise some extra buck along the way. Me, I'm so far happy as I am right now.

And, no Video Aids this time, but an obligatory Trent's Log instead.

Yeah yeah, I know, I spent over half a year sitting on this. Let's just say I had a veeeeeeeeery busy time, mostly with work as well as with Warcraft III campaigns, World of Warships grind and Warframe grind. This is why this one might be not as good as other articles in this series. I took a 9-month hiatus midway through making this.

I do plan to continue this, BTW. Just don't expect Mission 5 tomorrow.