Dennis Mull has been on a bit of a Wing Commander bender lately, and he's added several nice additions to his extensive PC gaming collection. The first up is an Italian Hit Squad release of WC1. The original game was bundled with a wide range of EA titles and compilations, but a solo pairing with an Indianapolis 500 game is a new one for me. I guess if that and Wing Commander were just what you were looking for, then you could buy this box and save some money! He's also got an Italian copy of Privateer 2, which is tons of fun. Last, but not least, he also picked up a combo lot with various European editions of WC1-4. That's a pretty good haul so far this week! 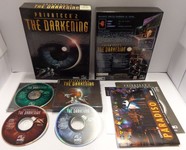 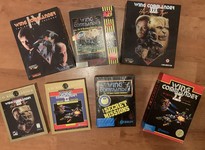 More beautiful Wing Commander games arrived ? You can’t have enough, right? Now I have to reorganize my shelves, again ?

I know what you mean!