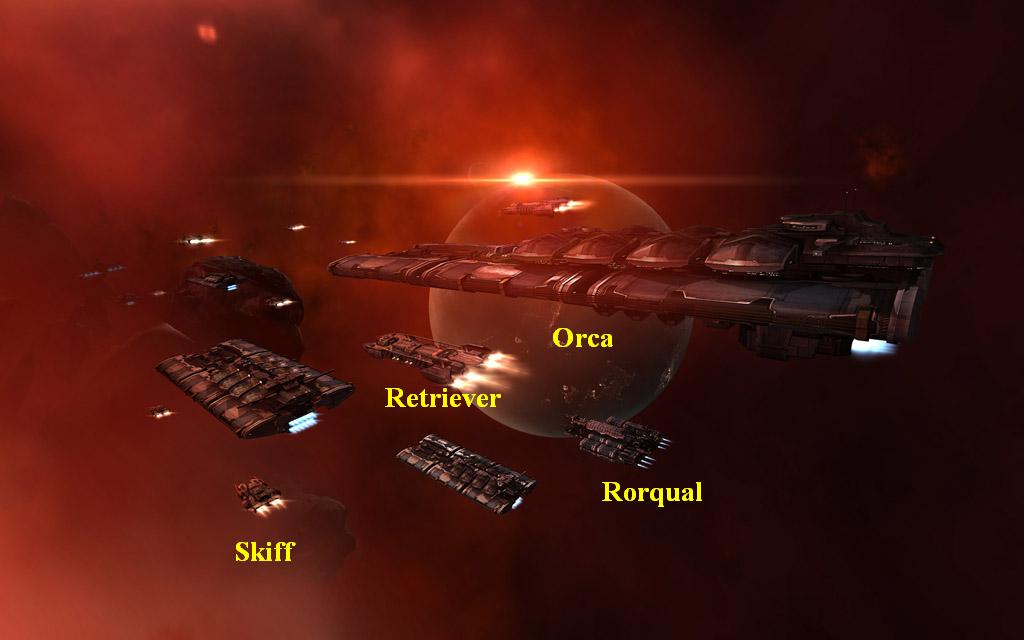 Orca Capital Industrial ORE
The Orca was developed as a joint venture between Outer Ring Excavations and Deep Core Mining Inc as a vessel to help meet the demands of New Eden's industry and provide a flexible platform from which mining operations can be more easily managed. The Orca uses much of the technology developed by ORE for the Rorqual and integrated with the latest advancements from Deep Core Mining research division has developed a vessel which offers a diverse role to all sizes of operations and needs

Rorqual Capital Industrial ORE
The Rorqual was conceived and designed by Outer Ring Excavations in response to a growing need for capital industry platforms with the ability to support and sustain large-scale mining operations in uninhabited areas of space.
To that end, the Rorqual's primary strength lies in its ability to grind raw ores into particles of smaller size than possible before, while still maintaining their distinctive molecular structure. This means the vessel is able to carry vast amounts of ore in compressed form.
Additionally, the Rorqual is able to fit a capital tractor beam unit, capable of pulling in cargo containers from far greater distances and at far greater speeds than smaller beams can. It also possesses a sizeable drone bay, jump drive capability and the capacity to fit a clone vat bay. This combination of elements makes the Rorqual the ideal nexus to build deep space mining operations around.

Skiff Exhumer
The Skiff is the smallest of the second generation of mining vessels created by the ORE Syndicate. Exhumers, like their mining barge cousins, are equipped with electronic subsystems specifically designed to accommodate Strip Mining modules. They are also far more resilient, better able to handle the dangers of deep space. Skiffs are specialty vessels, designed to mine Mercoxit.

Retriever Mining-Barge
The Retriever is the medium-sized version of a ship class designed by the ORE Syndicate to facilitate the advancement of the mining profession to a new level. Mining barges are equipped with electronic subsystems specifically designed to accommodate Strip Mining modules. Coupled with a sizable cargo hold and a godly drone bay, this makes them extremely efficient ore extraction vessels.