-Okay, now explain the stop in Sigma 17? - Flyagin asked.
-I donated some guns to a friend - I replied.
We were sitting in Stranger's cockpit, awaiting launch sequence.
And I still couldn't quite shake off the shock. The Datapad Of Doom, I have to admit, was nearly too much for me to handle. Though to be fair I always knew [DATA EXPUNGED] was a b_tch.
And now Flyagin needed a safe, secluded station as far away from human space as possible. Well, I knew one such station...
-Maybe Lost Paradise is worth considering? - he asked.
-Still Sirius, also it's Nomad space. The Order might get interested in it. No, Canteen, I have a better idea.
We flew from there to Omega 3 without landing, where I landed the ship on GMG observatory to set a location point in an Emergency Warp Drive and then used the Hypergate.

-I wish we had the Baneblade here - my CO said as we passed a Savage battleship with escorts in Venn.
-I agree - I said. - Maybe Great Doms absorb losses, but we might be able to force a stalemate at least.
-Operation Flamestrike disrupted a planned Sentinel raid into Weth, so you might be correct, but it did nothing on their military presense. - Flyagin said.
I smiled. Operation Flamestrike was still good memories.
-I am not going to let some shitstorm in Sirius render all of this to be in vain, Ajay - Flyagin continued.
Neither was I.
We flew, avoiding hostile fighter patrols and capital battlegroups, quickly reaching Weth, and from there heading to Sorror.
-Canteen, remember my reports on Canis Sector?
-Vaguely.
-Not even Dom'Kavash stay around there. I think that's secluded enough. Just gotta be careful with Nomads in Banysia...
And of course, these transparent motherflakkers were there, waiting near the gates. I used a maneuver I learned long ago and thrusted avay, then killed the engines and turned the ship backwards.
-This new thruster is awesome - I murmured as I got clear from Nomads' disruptor range, then engaged cruise and headed to the Kavash Arc.

The Kavash Arc was just as abandoned as I expected.
-I read the reports of this place, but to see it with my own eyes... - Flyagin murmured. - I envy you, Ajay. You get to see such places first.
-So, you got your secluded place. You won't get anywhere further from the Order. Now what?
-We need to recap the situation. Let's start with facts, then start building theories and testing them. So, we have a sabotage attempt of the Stranger and a GR's ship during a recon mission, a bunch of Nomad infectees, and now the contents of this datapad...
We spent a couple of hours discussing the events and possible causes, and making theories on what was really going on. Canteen was figuring out contingency plans in case of nearly all possible events or event sequences, I by most part was just trying to comprehend the possible clusterf_ck we'd have on our hands.
-Okay, this seems to be all - he said, looking at the A1 piece of paper covered in schemes we worked on, then rolled it into a tube and stuffed it into a blueprint case he brought with himself.

-Nomads inbound! - I exclaimed as Stranger left Kavash Arc. - They're in disruptor range. Hold tight and pray that Stranger is still tanky and that Nomads still can't shoot worth shit - I added and engaged the same maneuver I used when we got to Banysia. As soon as we were clear, I returned to original course and headed to Belay gates. 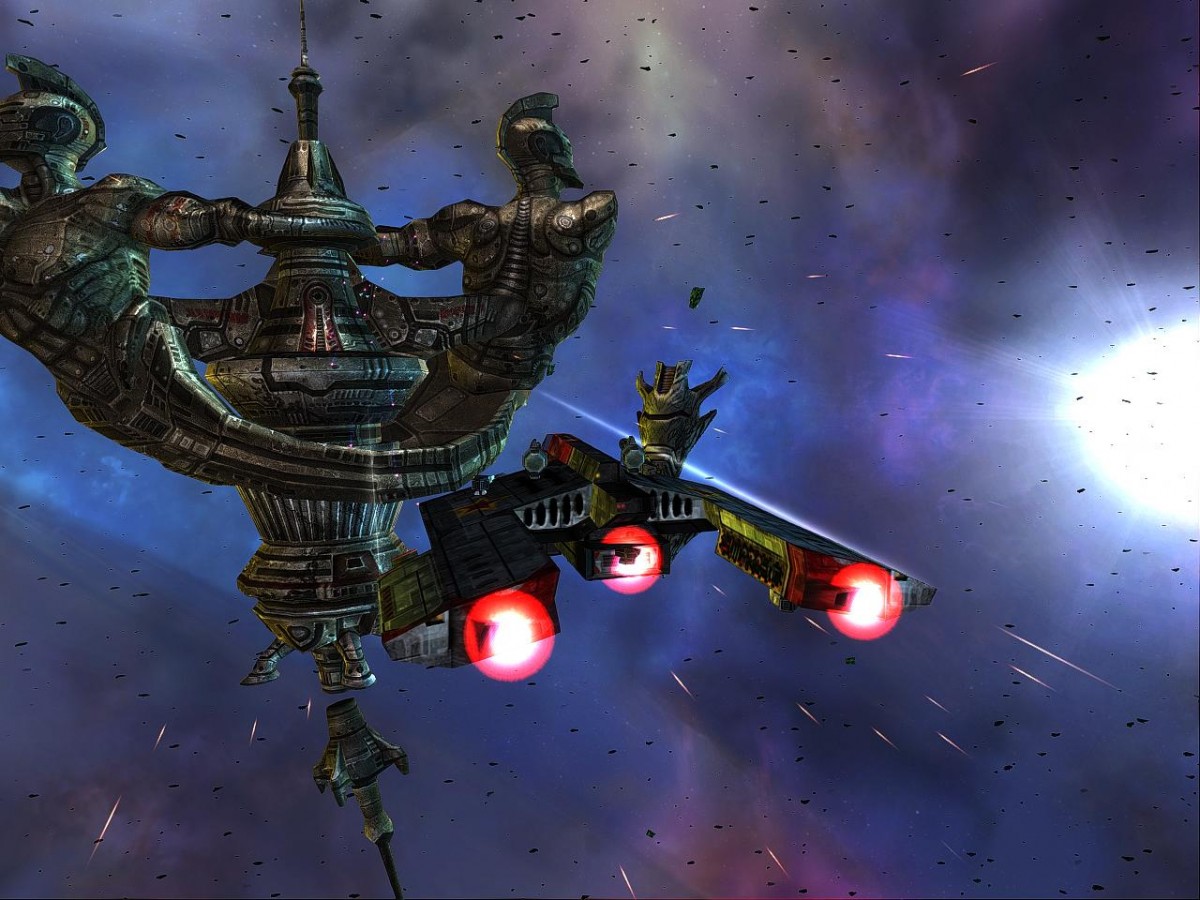 The way back was uneventful, and as soon as I jumped to Sorror I was met by K-719 and landed on it.
-Don't forget to tell me if this works - I said to Canteen as he moved to leave the Stranger.
-You'll know if this works - or if it doesn't - he said and opened the airlock. - I might call for you if I'll need your help. Good luck, Ajay.
-Good luck, Canteen - I replied as Canteen left my ship and airlock closed after him. I took off and headed to the nearest Dom'Kavash station, and landed there. I repeated all the stuff I learned in my head and reached for the bottle of "Tarhun"... but then relented, opened the trunk, pulled a bottle of old moonshine and poured myself a glass.
I haven't had a drop of alcohol in over a half of year. But now I had a good flakking excuse.

Author's note.
I doubted the first part, but I doubt this even more.